"HUMPED HIM A B'AR WHEN HE WAS ONLY THREE": WERE THERE DIRTY LYRICS TO "THE BALLAD OF DAVY CROCKETT?" 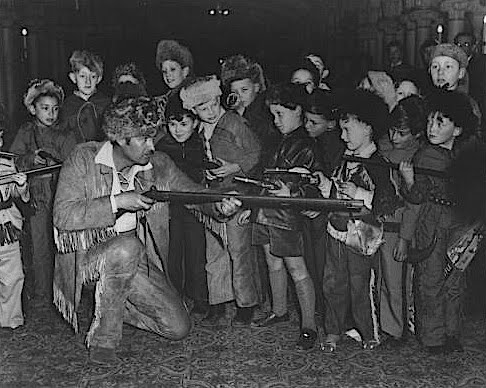 Now that Fess Parker, star of the classic 1950's DAVY CROCKETT teevee series and the later DANIEL BOONE, has died at the age of eighty-five, I have to ask the following question: is my memory faulty, or were there dirty lyrics to "The Ballad of Davy Crockett?"

An instant classic when first heard in 1954 in conjunction with the DISNEYLAND shows about the coonskin-capped frontiersman, "The Ballad of Davy Crockett" became as ingrained into the American pop culture psyche in the same way that "Eye of the Tiger" did in the 1980's, so much so that kids who never even saw the Crockett show could sing it. I think my first exposure to it was as a single included with a shitload of "kiddie" 45's my folks gave me when I was about four years old, and the song appealed to me because it gave the story basics of a hero, all imparted with a catchy tune.

As often happens with songs of such ubiquity, I recall "The Ballad of Davy Crockett" having received the "Ribald Songbird" treatment, but I may be wrong about that. I vaguely remember hearing a filthed-up version of it on the playground before my family left California for Connecticut, so if I did indeed hear it, I heard it before I turned seven. I seem to remember lines like:

Born on a mountain top in Tennessee
Didn't give a damn if he caught V.D.
Raised in the woods screwin' Cherokee
Humped him a b'ar when he was only three
(chorus) Davy, Davy Crockett
King of the wild Frontier!

And from there each verse escalated in smut-value, which comes as no surprise since the song fairly screams for a dirty interpretation. Why, the refrain of "king of the wild frontier" alone can be interpreted in many ways, including "takin' it in the rear," "takin' 'em in the rear" (obviously in reference to the Injuns he fought), or even "wearin' a black brassiere" (hey, being a frontiersman was a lonely path to walk). So with all that to jog the memory, does anyone remember any more dirty lyrics to this landmark of stirring 'Fifties pop patriotism? And if it doesn't actually exist, how about writing some? Send in your entry today!
Posted by Bunche (pop culture ronin) at Friday, March 19, 2010

Labels: THE BOOK OF THE POP CULTURE DEAD, THE RIBALD SONGBIRD

Don't know about the naughty version of the Davy Crockett song, but I have another tidbit that may amuse you and my fellow Vaulties.

Man, that ballad is long. I managed to pervert the first eight verses before I had to give up out of exhaustion (and shame).

Born in a brothel house in Tennessee, most inbred state in the land of greed
Raised amongst whores, so he knew every scream, syphilitic folks everywhere you could see
Filthy, Filthy Crockett, king of the hard-slammed rear!

Around nine-thirteen every day he rose, scratching at a few of his oozing sores
Living with the clap is something he knows, so he scrapes at his skin and off he goes
Filthy, Filthy Crockett, he loves to rub against brassieres

Off through the streets he struts along, fleecing the rubes, singing raunchy songs
Itching from herpes on his dick so long, he’s tapping those asses with his massive dong
Filthy, Filthy Crockett, the foreskin buccaneer!

Headed out to Tuscon with a gal on his face, and another tween his cheeks keepin’ pace
Fucking and sucking at a furious pace, licked as he went and left no trace
Filthy, Filthy Crockett, the wearing those honeys down!

Jacked off two handed til his cock was sore, sweating like a pig from every pore
And while he did the gals screamed “More” and loved him whether they were nun or whore
Filthy, Filthy Crockett, loved to screw them dears!

He spread disease throughout the land, fucking every woman and even one man
Masturbated and screwed til he couldn’t stand, and still said “I need more quim, ma’am
Filthy, Filthy Crockett, holding his dick all smeared!

Had his cousin at the base of a tree, wanted to keep it in the family
Fathered two kids with heads each three, pimped them out ‘fore they knew how to read
Filthy, Filthy Crockett, tapping his kin’s fine rears!

By the way, if anyone cares, here's the full eight verses of the original ballad:

Born on a mountain top in Tennessee, greenest state in the land of the free
Raised in the woods so's he knew ev'ry tree, kilt him a b'ar when he was only three
Davy, Davy Crockett, king of the wild frontier!

In eighteen thirteen the Creeks uprose, addin' redskin arrows to the country's woes
Now, Injun fightin' is somethin' he knows, so he shoulders his rifle an' off he goes
Davy, Davy Crockett, the man who don't know fear!

Off through the woods he's a marchin' along, makin' up yarns an' a singin' a song
Itchin' fer fightin' an' rightin' a wrong, he's ringy as a b'ar an' twic't as strong
Davy, Davy Crockett, the buckskin buccaneer!

Andy Jackson is our gen'ral's name, his reg'lar soldiers we'll put to shame
Them redskin varmints us Volunteers'll tame, 'cause we got the guns with the sure-fire aim
Davy, Davy Crockett, the champion of us all!

Headed back to war from the ol' home place, but Red Stick was leadin' a merry chase
Fightin' an' burnin' at a devil's pace, south to the swamps on the Florida Trace
Davy, Davy Crockett, trackin' the redskins down!

Fought single-handed through the Injun War, till the Creeks was whipped an' peace was in store
An' while he was handlin' this risky chore, made hisself a legend for evermore
Davy, Davy Crockett, king of the wild frontier!

He give his word an' he give his hand, that his Injun friends could keep their land
An' the rest of his life he took the stand, that justice was due every redskin band
Davy, Davy Crockett, holdin' his promise dear!

Home fer the winter with his family, happy as squirrels in the ol' gum tree
Bein' the father he wanted to be, close to his boys as the pod an' the pea
Davy, Davy Crockett, holdin' his young'uns dear!