AN ELDER RETURNS TO THE FOLD

One of the things I'm thankful for in my family is that my mom, who was born during the Great Depression, grew up reading and very much enjoying comics books, due to them allowing her to escape from the cruddy realities of segregated rural Alabama. Comics were always welcome in our home and she would occasionally pick one up and see what the heroes of the four-color page were like once they'd progressed past her youthful readings and their formative Golden Age heyday (she found Thor and Conan of particular interest; probably the long hair thing), but her excursion back to the realm of comics grew more and more sparse as she entered her frail dotage (she just turned seventy-seven). Sure, she'd check out the stuff I worked on during my time at Marvel and DC/Vertigo, but that was about it in the past twenty years or so.

Then came the release of Robert Crumb's adaptation of the Old Testament in a handsome hardcover graphic novel edition, so I figured I'd get it for her as a Christmas gift she would never expect. Like many people of her age, especially those of her generation who grew up in the south, my mom is rather "churched up" and finds great comfort in her faith, so I figured the Crumb book might be a way to give her an interesting take on the material, as well as allowing her a look at the work of one of my all-time favorite cartoonists, only in a format that would not offend her with graphic imagery of sweaty, trysting hippies, satirical blackface caricatures, cum-spurting cocks or dripping pussies. (NOTE: she did make it through all but the last ten minutes of PINK FLAMINGOS, so she has definitely proven her mettle when it comes to offensive entertainment.) I was especially interested to see how she would react to the Crumb Old Testament because just before I turned seven I begged her to take me to see a new animated cartoon movie called FRITZ THE CAT, and she was only too happy to take me to see it (she's a big movie buff, too). Well. imagine our surprise when we arrived at the movie theater only to be informed that I could not get in to see FRITZ THE CAT because it bore an X-rating, an important detail that we'd both missed when noting the newspaper ad for the film (which featured Fritz stating outright, "We're rated X, baby!"). Anyway, thus enlightened, my mom knew who Crumb was from that day forward, and I'll never forget her state of apoplexy when, at age 13, I obtained a shirt with Fritz and his unnamed girlfriend on it. She refused to let me wear it and even went so far as to claim, in reference to Fritz's girlfriend, "Her finger's going into her vagina!!!" which was of course the end-all bombshell in her argument against the shirt. Anyone who has ever seen the illustration in question will tell you that it contains no trace whatsoever of the alleged intra-vaginal digital shenanigans — the female character's supposedly offending mitt is clearly placed on Fritz's knee — but what amuses me most about this now is that my mom was far less offended by the fact that Fritz is depicted grabbing himself a generous handful of signature Crumb-style big ol' titty. 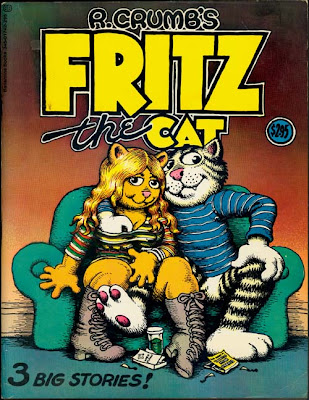 The t-shirt image that nearly made my mom's head explode.

So now we skip ahead by nearly thirty-two years, and I hand my mom Crumb's Old Testament. It's beautifully illustrated and not at all irreverent (which I admit disappointed me somewhat), so she accepted it with open arms on Christmas Day. Over the next few days I was delighted to see her quite absorbed in it, even to the point of completely ignoring her beloved CNN. I doubt if I'll get her to crack another graphic novel anytime soon, but the sight of my mom reading anything by Robert Crumb with vested interest makes me feel warm all over. 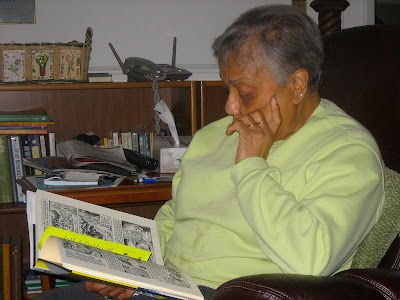 My mom, blowing off her obsession with CNN in favor of reading The Bible as interpreted by the comics medium's grandmaster of well-illustrated filth and tastelessness.
Posted by Bunche (pop culture ronin) at Thursday, March 18, 2010

The original artwork for Crumb's Genesis is currently on display at a gallery in Chelsea. (http://www.artcat.com/exhibits/11008)