This one's something of both a classic and an unsolved Marvel Bullpen mystery.

During my first year as a bright-eyed and bushy-tailed Bullpenner — not long before my daily existence was defined by shitloads of booze and weed — what follows was among the first examples of bizarre letters to cross my path. Editorial received the letter seen below after, well, it speaks for itself: 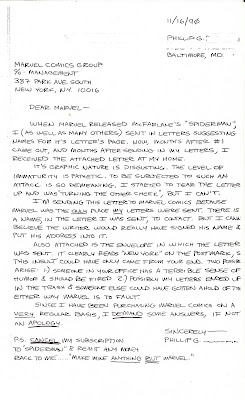 And what, you may ask, set off this offended reader? Here's the letter in question: 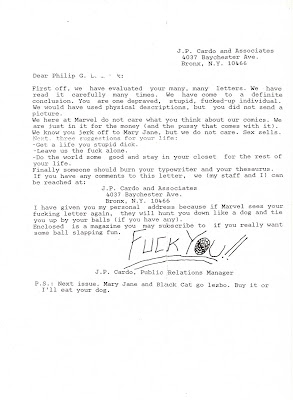 That letter obviously would never have been sent by anyone on the Marvel staff and no one by the nae of "J.P. Cardo" ever worked there, so I'm guessing it fell into the hands of a certain intern whose time at Marvel ended fairly swiftly due to his Bronx-bred general assholism. I have no proof of that, just supposition. But whatever the case, whoever wrote it gains points for rendering an otherwise sophomoric prank letter into a work of genius by making the "O" in "FUCK YOU!!" a Spider-Man head. Well played, sir!
Posted by Bunche (pop culture ronin) at Monday, March 08, 2010

That's hilarious... Alot of time and energy devoted to messing with a fan. I'm trying to remember the intern you're referring to... I can see why he got "removed". Heh!

And here I would figure that the prank letter just took advantage of someone naive enough to allow their full mailing address to be published in a nationally-distributed magazine...

I think I will use a Spidey head as the O in "FUCK YOU" from now on.

I used to write to Marvel Vision of all fucking things and the editor of that was a real swell guy. I think it was Tim Tuohy but I can't say with 100% certainty. Anyway, one time he sent me an original piece of artwork featuring Silver Surfer and some of Marvel's other space-based characters. Anyway, that was awesome and I still remember that to this day (obviously) and I still have the artwork.

If Tim had instead sent me a letter telling me to eat a bag of dicks, that would have been less awesome but I imagine it still would have had the same level of impact.

It's crazy the level of power you comic book guys have over children. You're like muppets and priests but with less touching.

Those two letters left me laughing for a good 15 minutes. That intern should run for office.