THE MAGIC OF SUBWAY GRAFFITI 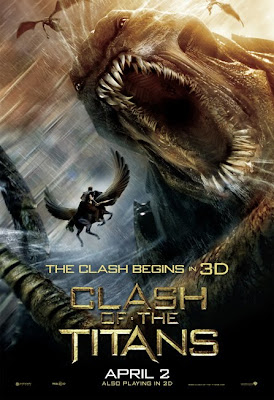 The regular format promo poster for the upcoming CLASH OF THE TITANS remake.

As the remake of CLASH OF THE TITANS looms, poster ads for it have been popping up all over buses and the walls of NYC subways station platforms, each featuring a dramatic illustration of Perseus astride Pegasus as the fly into direct confrontation with the monstrous Kraken. It's not bad as these things go, but no subway ad is safe from marker-bearing vandals for more than three minutes, and even then only at Jesus o'clock in the morning.

The horizontally-formatted CLASH OF THE TITANS promo poster found in the subway station around the corner from where I live could not have been up for more than a few hours before it was merrily and surprisingly non-pornographically defaced by some Sharpie-wielding prankster. 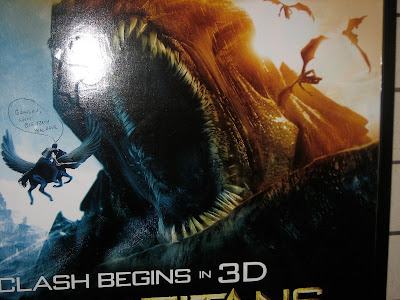 When I passed the poster seen above the other morning, I recognized the handwriting as that of the unknown vandal who regularly victimizes the posters at my station, only this time his word balloons didn't have anything to do with sucking cock or the mention of particularly noxious farts emitted by the characters depicted. (Come to think of it, one would think that the wide-open mouth of the Kraken was just begging for a hastily-scrawled, crudely-drawn penis descending toward it, but I guess there just wasn't enough space for a hairy, wart-festooned John Bligh-style choad.)

The first of the balloons was simple, but good for a giddy giggle from a not-quite-awake me (double click on the image to see it large): 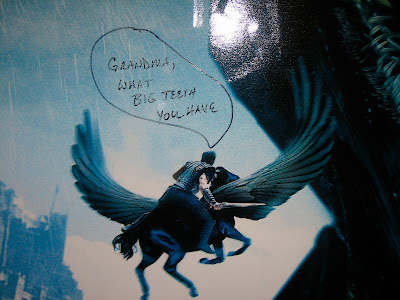 And the commentary from the flying Harpies was also amusing: 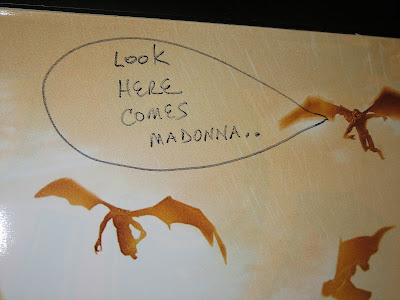 The slamming of Madonna is one of this vandal's repeating motifs, although he sometimes substitutes Madonna for Cher.
Posted by Bunche (pop culture ronin) at Thursday, March 11, 2010

Labels: ON THE SIDEWALKS OF NEW YORK, RANDOM SILLINESS