OH, FOR FUCK'S SAKE: THE GUY WHO PLAYED THE DOUCHEBAG VERSION OF JOHNNY STORM IS NOW CAPTAIN AMERICA 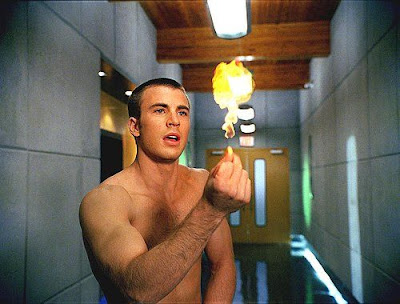 Chris Evans as Johnny Storm: redefining the term "flaming douchebag."
In a move that once again proves that the so-called minds at work in Hollywood are bugfuck insane, Chris Evans, the guy who played the utterly loathsome version of Johnny Storm in those fucking awful FANTASTIC FOUR films, has signed to play Captain America — CAPTAIN FUCKING AMERICA!!! — in 2011's CAPTAIN AMERICA: THE FIRST AVENGER. On behalf of Steve Rogers, I weep in great wracking sobs. If The Red Skull truly wanted to kill Cap, he wishes he could have come up with a scheme as dastardly as this. Yes, this guy is going to play the sentinel of liberty. I never thought I'd live to say it, but...BRING BACK REB BROWN!!!
Posted by Bunche (pop culture ronin) at Wednesday, March 24, 2010

Hugo Weaving is going to be Red Skull which is a good choice. The worst part about this is technically they shot down all hopes of a Fantastic Four cameo in The Avengers

Agreed, he is one of the worst things about that franchise next to their cheap-ass take on Galactus.

Also good because that shitty version of the FF is now kaput.

It's not all bad. At least they didn't pick Krasinki.