WHEN THE FANS COMPLAIN

This one's from the early 1990's, just after Marvel raised the cover price on their comics. I particularly love the itemized list of books the guy will no longer be purchasing: 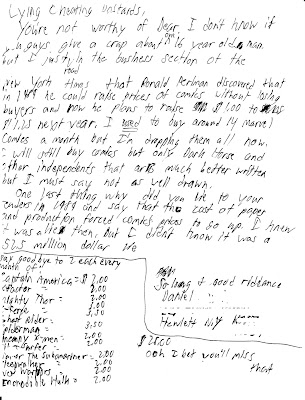 With that said, the illustration is question was very crudely crafted, including some shaky-handed tracing of the grownup female characters in order to make up for the sender's clearly non-existent skill at drawing hot chicks. The Power Pack kids (and Franklin Richards) cavorting with them were so badly drawn that it required some effort on the part of the viewer to fully perceive what was going on, and the whole mess ended up looking like it was scrawled during social studies class by a bored and very naughty seventh-grader. Nonetheless, It's probably in my own best interests not to run it. Thanks for the tip, ChrisV82.
Posted by Bunche (pop culture ronin) at Tuesday, March 02, 2010

Why was that guy in the first letter buying two of everything? He's probably one of those "collectors" that has a lot of bargain bin "keepsake" issues.

My favorite quote from the letter: "I will still buy comics but only Dark Horse and other independents that are much better written but I must say not as well drawn." I like that he had to concede a positive to Marvel.

wow, that guy has the EXACT same handwriting as me. Except mine might be a little bit worse