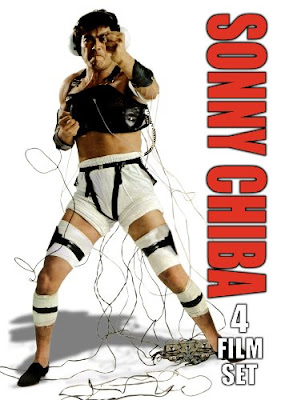 While most martial arts movie buffs favor Bruce Lee or Jackie Chan, my ass-kicker of choice is my man Sonny Chiba, so when a four-film set of Chiba flicks I had not seen hit the video store shelves, how could I pass it up? I'll review all four films as I watch them, and the first one up is 1978's YOKOHAMA UNDERWORLD: MACHINE GUN DRAGON, a film starring not Chiba, but instead Bunta Sugawara, an actor renowned for playing assorted yakuza toughs and criminals in flicks like the BATTLES WITHOUT HONOR OR HUMANITY series. 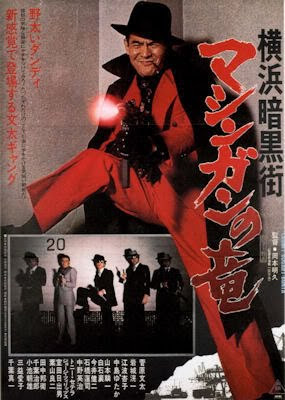 The flick is typical of the yakuza pictures of its era and tells the story of a criminal who, with the aid of his equally criminal (and apparently incestuously-inclined) mom, steals a valuable shipment of drugs (about enough to fit into a medium-sized backpack) from a local crime syndicate. The pair stash the drugs in a wall deep within a sewer and lay low, hopefully until the media attention and mob interest dies down, but their identity is sussed out when a newspaper picture of the heist's aftermath clearly shows the machine gun used to mow down the drug mules. Automatic weapons are hard to come by in Japan, so the ripped-off crime lord sends his men to find out who sold the particular weapon, thereby learning the thief's identity in the process, and from there the mother and son duo must contend with corrupt cops, the irritated local yakuza boss, and his equally-pissed-off American mafia partners. It all gets off to an entertaining enough start, but once the film reaches the halfway mark it just coasts along in a very much by the numbers manner before reaching its "who cares?" conclusion, a climax marked with the over-wrought melodrama and would-be "moving" theme song common to the genre.

You'll notice that I make no mention of my man Sonny Chiba, and there's good reason for that. Chiba plays a bearded purveyor of illegal passports, and he shows up for all of maybe — maybe — two minutes of screen time right near the movie's final fifteen minutes. He sells passports for the hero, his girlfriend and a fellow escaped prison inmate (don't ask) who turns out to be a planted yakuza agent, and once the passport salesman recognizes the plant, he kicks the living shit out of the guy in the signature Chiba way. It's the most one-sided fight I've ever seen; it's Chiba against a vastly weaker opponent, a guy so hopeless that I could envision my 22-years dead grandmother beating the piss out of the poor bastard. Once that non-fight is over, so is Chiba's part. That's it. He just fucks off to god knows where, and all we're left with is Sugawara's uninvolving attempt to flee to Korea by means of a fishing boat. The whole mess ends with Sugawara getting into a machine gun battle against encroaching yakuza and mafia thugs (right after a black mafia enforcer slashes Sugawara's character-void girlfriend's throat with a straight razor), by which point I had long since ceased to be interested.

I'm hoping the remaining films in the set are better than YOKOHAMA UNDERWORLD: MACHINE GUN DRAGON, but the Japanese action films of the period are a famously mixed bag, so I'll go into the next three with zero expectations.
Posted by Bunche (pop culture ronin) at Saturday, March 20, 2010