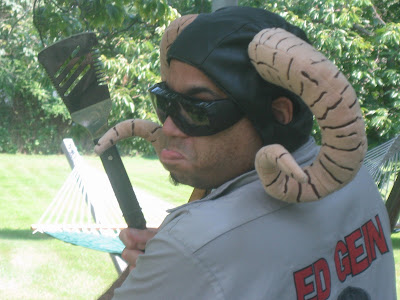 What's not to love about a grill-master in a shirt celebrating an infamous Wisconsin cannibal?

Spring is upon us and that means it's time for me to start doling out heaping helpings of my famous slow-cooked pulled pork. It's a favorite among my friends and family, and now I will share its secrets with you, o lucky Gravy-Groovers!

The process is simplicity itself: 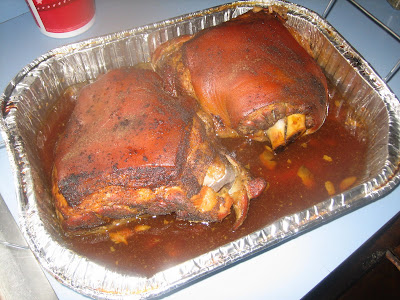 Actual shot of pork just out of the oven in Jared's kitchen on Saturday morning.
The meat will be tender like you won't believe, and take care to peel off the skin in one piece if possible (more on that shortly). 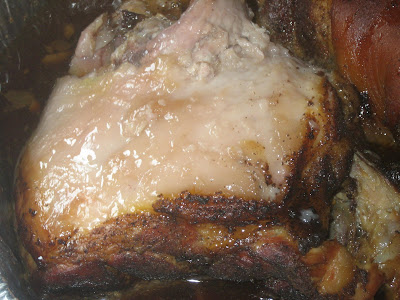 With the skin removed, the pork will reveal a glistening layer of artery-clogging tastiness and it's up to you to decide how much fat you want to leave attached when you pull it into a form more conducive to eating in a shredded mound, wrapped up in tortillas or on a sandwich. As anyone will tell you, the flavor is in the fat, so don't dump too much of it. But then again, if you're gonna eat this stuff you know what you're in for.

Once you've solved your fat issues, use a pair of meat tongs and grab the large bone that's visible in the pork. Grasp the bone firmly and tug; the bone will dislodge with the ease of pulling a finger out of a velvet glove. 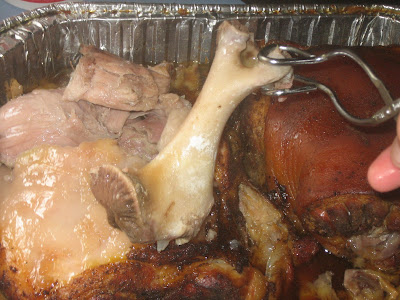 The ease of the pull: note the complete and utter lack of meat adhering to the bone.
Once that's removed, poke around with a fork to locate any remaining smaller bones and gristle and remove that stuff. Then take a sturdy fork like one of those big fuckers some people favor for the grill — I don't, because poking meat lets the juices out; only use tongs or spatulas for grilling! — and gently swirl through the meat like you're using a frosting-spreader. The meat will fall apart like magic, and once you've made sure no excess bones or other such crud remains I would advise tasting the pork to determine if it needs any additional seasoning or tarting up. I'd go with some more adobo, salt, pepper or sage, but only you can know what's best for your by-now-drooling audience. Serve as is with some sauce of choice — I recommend making some of my patented Barbecue Loooooooooove Sensation Sauce — or throw that gorgeousness onto some white bread or a good potato roll and prepare to watch your guests go into spontaneous culinary orgasm.

The aforementioned Barbecue Loooooooooove Sensation Sauce is also a study in simplicity:

Take as much cheap barbecue sauce as you may need and put it into a big pot; blend in honey and mustard to taste and add a huge motherfucking shitload of garlic powder. Blend until somewhat smooth but thick, and keep in mind that the flavor should be sweet and garlicky. At this point it's up to you to add hot sauce if you want a bit of a kick to the concoction; if you seek that flavor I recommend Indi-Pep West Indian pepper sauce, but you use what you like (except for the green Emeril sauce; it's tasty but it will throw off the color. And the shit is pointlessly expensive).

And as for the previously set-aside pork skin, put it non-fatty side down onto a baking tray or cookie sheet and hit it with a little adobo and finely ground cayenne pepper. Heat the oven back up to about 300 degrees and put the skin there for about a half hour to forty-five minutes, checking occasionally with a spatula to prevent sticking. When it's crispy enough for your taste, take it out and cut into appropriate sizes for homemade pork rinds, but don't serve them until they've almost at room temperature. Can't you just feel your heart seizing up like a rusty and mud-mucked chainsaw?
Posted by Bunche (pop culture ronin) at Friday, April 02, 2010

Sounds yummy! I have yet to try pulled pork.