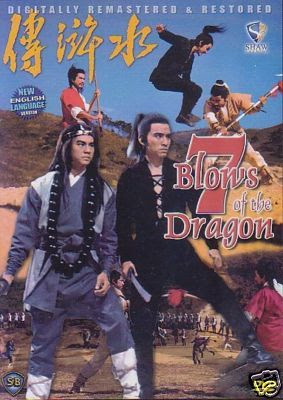 There are a number of movies that just plain put me in a very psyched-up and good mood and the classic Shaw Brothers kung fu flick 7 BLOWS OF THE DRAGON is one of them. Released in China in 1972 and making its way over here in 1974 as part of the avalanche during the mid-1970's "chopsocky" boom, the flick is kind of an all-star Eastern variant on the whole Robin Hood-style heroic outlaws thing, and I just got my hands on a cherry widescreen DVD of it that includes the frequently hilarious English dubbing. Watching it last night, I once more reveled in its story of betrayal and the subsequent righteous vengeance for that lowdown treachery, and ludicrous lines line "The Mountain Bandits are here!!!" and "Watch out! The Double-Kick of Death!" (used to described what is clearly a three-tiered technique) just make me smile.

Anyway, I'll be reviewing 7 BLOWS OF THE DRAGON in all its glory as soon as I make some appropriate screen captures from my DVD. Considering what a classic this one is, there's surprisingly little decent imagery from it available on the Internet, but I'll be taking care of that soon. Oh, and don't ask me what the film's American title means. Nothing relating to it occurs at any point during the movie's running time. 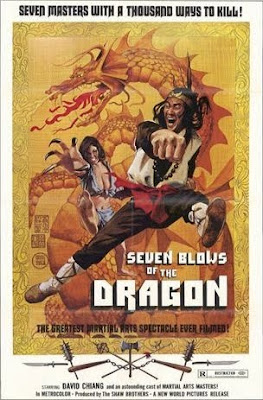 Poster from the American theatrical release. Keep in mind that the tag line about "seven masters with a thousand ways to kill" has absolutely nothing to do with the story.
Posted by Bunche (pop culture ronin) at Sunday, April 18, 2010