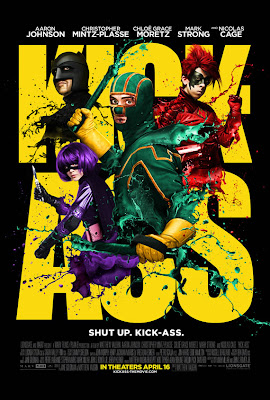 So I finally got around to seeing KICK-ASS and I have to say that, overall, I thought it more or less sucked for a number of reasons. I read the source comics and didn’t much care for those either — save for one element that I will address shortly — but at least the comic stuck true to its basic premise, namely what would happen if some moron put on a costume and attempted to fight crime as a non-powered superhero in reality, with that reality being the linchpin upon which the entire narrative rests. In its translation to the screen, the realism that the comic book version of KICK-ASS strove for is kicked to the curb around a third of the way in, thus rendering the movie somewhat schizophrenic and “Hollywoodizing” the content to a degree that escalates into outright ridiculousness that is plainly insulting to the intelligence of its audience, a group that is more than willing to suspend its disbelief in the name of being entertained.

KICK-ASS introduces us to Dave Lizewski (Aaron Johnson), a wimpy loser who is beset with bullies and a frustrating invisibility to the females in his school, in other words basically an update of Peter Parker, save for Lizewski’s interest in comic books and superheroes. After pondering why no one ever just put on a costume and started fighting crime in real life, Dave takes to the streets as Kick-Ass and immediately suffers a serious ass-kicking and stabbing from two thugs who harassed and mugged him while he was in his civilian garb. Coming out of the hospital with metal-reinforced bones and fucked-up nerve endings that allow him a very high pain threshold, Dave again makes the nighttime rounds as Kick-Ass and saves a man from being beaten to death by three street gang members while taking a lot of punishment in the process. This ill-advised bit of Good Samaritanism is recorded on an onlooker’s cell phone and immediately becomes an Internet hit, spurring Dave to set up a web page where people can contact Kick-Ass and request his aid. Meanwhile, another mysterious figure is murdering the mob forces of Mafiso Frank D’Amico (Mark Strong) and stealing considerable amounts of his cocaine and cash, which leads D’Amico to incorrectly figure Kick-Ass is responsible and sets out to eliminate the presumed thorn in his side. The real culprits are an ultra-violent take on Batman and Robin, namely former cop Big Daddy (Nicholas Cage) and Hit-Girl (Chloe Moretz), his eleven-year-old daughter, both of whom are highly skilled in hand-to-hand combat and use of a cornucopia of weapons, and they come into contact with Kick-Ass when they save him from being killed by drug dealers. An uneasy alliance between the “heroes” is established, and along with his crime fighting Dave enjoys the attentions of Katie (Lyndsy Fonseca), a cute classmate he has a crush on, but who thinks he’s gay and wants him as her “gay B.F.F.” Also, Dave, in Kick-Ass mode, is befriended by alleged fellow amateur superhero Red Mist (Christopher Mintz-Plasse), who is in actuality the son of Frank D’Amico, acting to lure Kick-Ass into his dad’s clutches. All of these plotlines eventually converge and the end result is a colossal train wreck on nearly every level.

The first third of KICK-ASS is firmly rooted in what we know as reality, but then it seems as if a totally different director and screenwriters were brought in to alter what remained to fit in with results garnered from audience testing. Where Dave was a complete loser in the comics, in the film he transforms into a kinda-cool dude who, after fessing up to his crush-object about not being gay and revealing to her that he is Kick-Ass, gets to fuck the hot girl in the alley behind the local comics shop/café (more accurately, he’s fucked by her, first in her bedroom and later in that oh-so-romantic alley). In the comics, Dave only reveals that he isn’t gay, which leads Katie to understandably explode in utter apoplexy, after which one of her hulking jock pals beats the shit out of Dave. That scenario, I believe. The other, not at all. And do not get me started on the moment during the film’s insanely violent climax when Kick-Ass — an ordinary teenage loser, let us not forget — arrives to rescue Hit-Girl (who is about to be blown into a million smoldering chunks by a bazooka-wielding hood) flying in a James Bondian rocket pack, equipped with twin helicopter assault guns that snap up from behind him and align themselves over his shoulders for tactical deployment. The sight of that made me exclaim aloud, “Oh, come on!!!” and changed my opinion of the film from one of mere indifference to almost-total hatred.

While the teenage characters’ performances are all pretty good, I was rather saddened by the waste of Christopher Mintz-Plasse in the role of Red Mist. He’s given little to do here that would have challenged a newbie actor, and fans of SUPERBAD’s McLovin will be sorely disappointed by how he was short-changed by this script. In the source comics, Red Mist is introduced as a mystery, so when the reveal about who he actually is and the reason for why he became Red Mist hapens, there's a real surprise. In the movie we know who he is from the second we see him, so that potential narrative shock is completely squandered. The comics were not great, but that plot point is one of the things about it that did not require "fixing" by the screenwriters in any way. 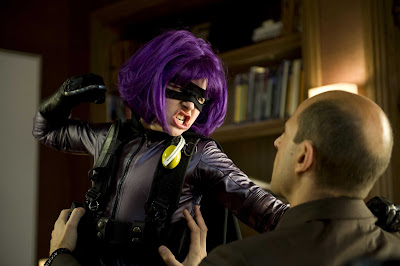 The one thing (or rather two things) that I genuinely liked about this movie is the presence of Big Daddy and Hit-Girl, a pair who were also the only things that kept me reading the comic book (I was about to give up on the comic, but then they showed up and I kept reading just to more of them). Simply put, the duo own the movie whenever they’re onscreen (which amounts to about a fifth of the running time) and Hit-Girl brings pain and graphic violence down upon the bad guys like a pint-sized Fury straight out of Greek mythology, with touches of Cynthia Rothrock and Tomisaburo Wakayama thrown in for good measure. Or, in non-chopsocky speak, the kid is a complete and utter badass in every way, and if this film makes enough at the box office to warrant a sequel, I suggest the leave out all of the original film’s characters, focus on her, and title the movie DON’T FUCK WITH HIT-GIRL. And while Hit-Girl steals the movie, Nicholas Cage’s Big Daddy charms as the sweet and doting father who forges his kid into a merrily willing participant in his vendetta against D’Amico, and while in his Batman-esque Big Daddy costume, he affects a hilarious Adam West-style of line delivery that had me cracking up. (To the best of my knowledge, the Adam West BATMAN show has not been seen in syndication for at least ten years, so I wonder if the under-thirty-fives in the audience will get the gag.)

To sum up, KICK-ASS is garnering all manner of critical acclaim for reasons that completely elude me, and I’m betting that no matter how I may rail against it, you mat be tempted to see it in the theater anyway. Please, dear Vaulties, I beg of you not to spend your hard-earned cash to see this for full or even matinee price. Wait for cable of a Netflix rental if you must see it, and keep in mind that it’s only worth it for Big Daddy and Hit-Girl. Otherwise, it’s an over-hyped waste of celluloid. If you're looking for a movie that takes the whole realistic non-powered superhero thing and does something both intelligent and genuinely worthwhile with it, check out the vastly superior DEFENDOR instead. 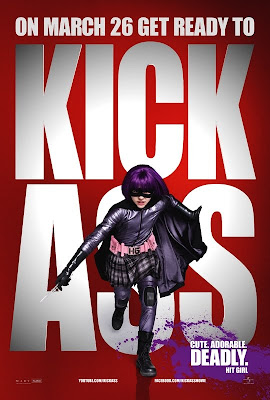 If a sequel happens, change this ad's title to DON'T FUCK WITH HIT-GIRL and we're good to go.
Posted by Bunche (pop culture ronin) at Monday, April 26, 2010

Yeah, that was a pretty outlandish plot twist(though I think that was kind of the whole point), but as for it being completely impossible...

did you just sneak in that Defendor was better then Kick-Ass? I saw that last line there. If I were you I'd board up the windows before the rabid fanboys coming barging in

oh, and of course we know Adam West Batman. If not for watching the show as a kid from all the cartoon shows he does voices for always talking about being Batman. Most of my friends know exactly who Adam West's Batman was like and haven't seen a single episode or read a batman comic