My buddy and Marvel Bullpen brother Paul alerted me to this 1956 West German jungle girl flick the other day and told me in no uncertain terms that I had to see it for its star, the mouthwatering Marion Michael. When he mentioned the title, it rang a bell in my head and then I remembered it was one of several features included on the mostly wretched 5-disc JUNGLE GIRLS GONE WILD boxed DVD set, a collection I've had laying around the Vault for the past two years but could not get all the way through because what I'd watched of it was just plain awful. Emboldened by Paul's recommendation, an opinion I learned to trust implicitly over the past two decades, I popped in the disc containing LIANE, JUNGLE GODDESS at Jesus o'clock in the morning and sat riveted as the film's (mostly) G-rated imagery stirred much naughtier musings within my febrile imagination.

Our heroine. Jumpin' Jesus in a basket of chicken...
An apparently German expedition into darkest Africa — the intended purpose of which is never actually explained, but I think they were there to gather animals, also for an unexplained reason — runs across a tasty and topless white girl (Marion Michael) living among the local "savage" Boto tribe, clearly at home in the jungle and very comfortably a part of the tribe's culture, which raises the question of just who this tasty bit of "Sue Lyon meets Hayley Mills" piece of Burroughs-fantasy jailbait is (Michael was sixteen when this was shot) and how the hell she got there. The young hottie is swiftly captured in a big game net by a sleazy expedition member (who we know is a horny rotter after witnessing his borderline rape attempt on the party's cute brunette doctor), but she ends up under the protection of clueless Kraut-hunk hero, Thoren (Hardy Kruger), a handsome lunk who only recently twigged to the fact that the aforementioned doctor is sweet on him. In no way the mighty and savage jungle queen one would naturally expect from a film like this, the non-English-speaking girl is swiftly revealed to be a total innocent and very much a child-woman in need of a real he-man to protect her fine blonde ass, but after Thorsen violently defends her from the horny dude, she begins to feel stirrings that can be clearly read on her lovely face and via her body language. The uninhibited young thing is now totally smitten by our Aryan Apollo and she spends the rest of the movie trying to get next to him.

"Don't mind me...Just hangin' out, bein' hot..."
After some minor hoo-haa when her tribe attempts to take her back, the expedition leaders decide to see if anyone has heard tell of a white child possibly having been lost in the jungle some years previous, and their only clue to her identity is a locket engraved with the letter "L." When the news reaches the world at large, a wealthy West German industrialist is convinced that the girl is none other than his grand-daughter, Liane, last seen some eighteen years previous as a two-year-old and presumed dead when the ship her parents were traveling on sank off the coast of Africa. Gramps remembers that the girl was accompanied by an African nanny, so if she did indeed survive it stood to reason that the nanny would seek to rejoin her people, taking her young charge with her and raising her as a native.

NOTE: most reference sources for this film cite Liane's age as sixteen, but the English-dubbed print I saw stated she was two when lost and that the story takes place eighteen years after her presumed death, therefore she's twenty. That said, she doesn't look a day over sixteen or seventeen.

Thoren takes Liane back to Europe to find out if she is the long-lost grand-daughter, but the old man's slimy nephew and appointed corporate head and heir, Viktor Goehring (rat-faced Reggie Nalder, best known in the U.S. as Albino in 1970's infamous witch-finder torture opus MARK OF THE DEVIL and as master vampire Barlow in 1979's made-for-television SALEM'S LOT), stands to lose a fortune if Liane is conclusively proven to be the old man's actual flesh-and-blood, so he actively plots to discredit her and make her appear to be a gold-digging fraud. Fortunately Liane has Thoren and her tribesman friend, Tanga (Jean Pierre Faye), looking out for, but Viktor will stop at nothing to ensure his inheritance, not even cold-blooded murder... 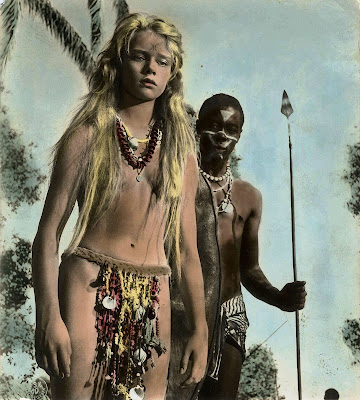 Liane and Tanga (obviously before their sojourn to West Germany).
LIANE, JUNGLE GODDESS starts out with a lot of promise but is swiftly fucked over by the one element that is almost always guaranteed to scuttle a story like this, namely having the wild protagonist be discovered to be an heir to some vast European fortune, thus necessitating a trip to civilization that utterly removes the fun fantasy elements that we watch such jungle fare for. The film is loads of fun for roughly the first forty minutes and filled with tons of topless eye candy (although Liane's breasts are always strategically covered with her hair, we get the idea and it was reportedly controversial for its time, which I totally believe), but once efforts are made to "civilize" Liane by cutting off most of her spectacular and untamed mane of hair, getting her to wear clothes (although I did not complain about her fetching shorty-shorts), teaching her a smattering of German (English in the dub) and suchlike, the film loses a great deal of its charm and potential. What could have been a cool distaff Tarzan adventure, or even a return trip to territory already mined in 1936's THE JUNGLE PRINCESS, is completely squandered and would not have been worth watching through to its conclusion if we hadn't already come to like (and like looking at) Liane, as well as wanting to see just how far Viktor was willing to go to make sure he came out a winner. Liane herself is also way too docile/submissive and would disappoint fans of the genre who like their jungle heroines tough and capable if not for her considerable charm and drop-dead-gorgeous looks (the photos accompanying this piece do not do her justice). I mean, even her requisite animal pal is a very young and utterly un-menacing lion cub named Simba, ferfucksakes!

Liane and Simba (and nipple).
But whatever the case may be with the final result, the film was a hit and gained Marion Michael screen immortality (among jungle girl fanatics, anyway), also spawning a sequel, alternately known as JUNGLE GIRL AND THE SLAVER or NATURE GIRL AND THE SLAVER (1957), a film that's reportedly pretty poor. Poster for the 1957 sequel.
It may suck as bad as I've heard, but I'm nonetheless intrigued and intend to seek it out. 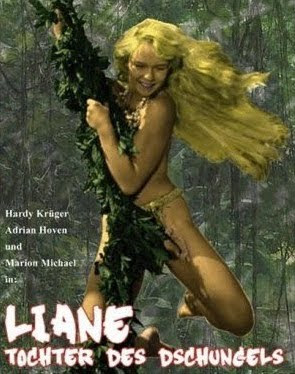 An image from the sequel that thankfully restores Liane's out-of-control locks.
Posted by Bunche (pop culture ronin) at Friday, April 02, 2010

So it's sort of like a female version of Greystoke but really bad? Have you gotten one of Frank Cho's magic pens? Next time you see him ask for one. His Jungle Girl loses her bikini when the water inside moves or something. He's really adorable. I just have such a soft spot for men that crazy talented drawing hot babes.