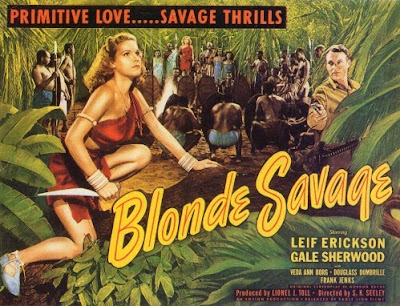 NOTE: this is a revised and updated version of a post from February of 2007.

Ah, the ludicrous pleasures of the jungle adventure, a genre more or less wrestled to extinction by the two-pronged assault of political correctness and the existence of reality. With the Tarzan movies leading the pack in terms of entertainment, budget and basic concept — white person/people run around Africa kicking the shit out of “bad” Negroes and any wildlife that has the balls to attempt protecting itself, and occasionally taking the time to loot indigenous cultures of their ancient treasures or murder their gods — the genre flourished on the big screen from roughly the early 1920’s through the late 1950’s/early 1960’s, thereafter settling into an almost thirty-year rotation on syndicated television as weekend afternoon matinees. More often than not silly as hell, even the most cheapjack of jungle flicks can be a boatload of fun, which brings me to the idiotic charms of BLONDE SAVAGE.

I first encountered footage from BLONDE SAVAGE while stoned out of my mind and watching late night cable in 1987 in a documentary best described as the THAT’S ENTERTAINMENT of bad movies, namely IT CAME FROM HOLLYWOOD (1982), during a segment entitled “Musical Memories." In that segment, highlights from atrocious cinematic musical numbers unspooled to hilariously awful effect, eventually hitting a cross section of offensive blackface and faux African material, smack dab in the middle of which was grainy footage featuring some incongruous blonde bombshell in Tarzan-style drag leading a horde of war-painted “Africans” in a non-rousing pre-battle pep chant. 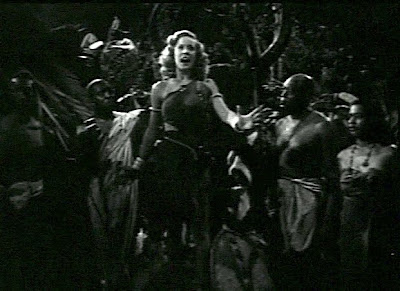 To quote Richard Pryor, "Sing that song, you bitch!"
As the natives rolled their eyes and furiously pounded drums, the blonde yowled forth in the most White-a-tized voice one could imagine when compared to the earthier charms of the tribe’s “race” music, shouting “Vah-Gah! Vah-Gah! Dah-Koom Vah-Gah! Dah-Koom Vah-Gah!” which apparently means “Kill” or some such thing. 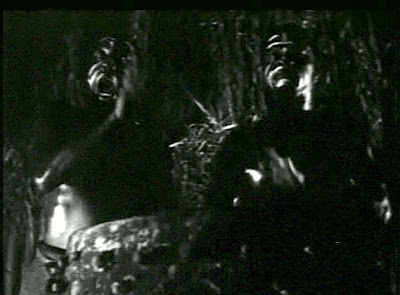 The bruthas get down.
As the bug-eyed Hottentots boogie down, they gaze upon the blonde with obvious reverence of her stilted attempt at being funky, until she let’s out a delighted squeal, picks up a spear, leaps off her throne and joins the throng in the Dark Continent Soul Train road company. The documentary's footage then abruptly cut to even more outrageous pickanninny shenanigans, but I was laughing my ass off since I find few things funnier than old movies depicting the melanin-challenged doing black people shit better than black people do while my dusky brethren stand around admiringly as if to say, “Gaw-DAMN, dat li’l white gal sho’ can dance/eat fried chicken/kill colonials! Yowza!!!” Thus intrigued, I embarked upon a twenty-year quest to find BLONDE SAVAGE, and thanks to the New York Comicon I have successfully obtained my quarry. The DVD release of the film is transferred from a beaten-to-shit print that jumps about thanks to individual seconds missing here and there and sports scratches all over the place, both elements that only add to its squalid glory. The film opens with a title card that evokes the most piss poor of matinee serials, yet somehow instills the viewer with confidence that massive goofiness is about to follow, and trust yer Bunche, it does so in spades. 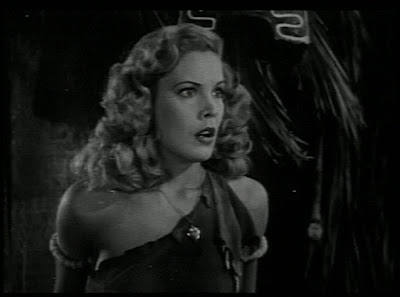 Gale Sherwood as Meelah.
In a nutshell: two doofy White guys, one a handsome bohunk (Leif Erickson) and the other a guy (Frank Jenks) are paid by a rich asshole (Douglass Dumbrille) who owns a diamond mine to locate the hidden village of a tribe who keep giving him shit, allegedly motivated solely by their innate savagery, and when our bargain basement heroes conveniently crash land right next door to the village, they discover a hot blonde named Meelah (Gale Sherwood) —speaking fluent Hollywood “oogah-boogah” gibberish — who’s sort of a goddess to the tribe, and pretty handy with a poisoned blowgun and spear. 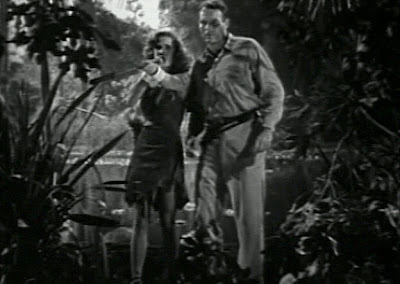 There's always fun when you've got a blowgun!
After convincing the tribe that they aren’t the rich asshole, the heroes take a couple of weeks to fix their prop plane and teach the heathens English, thereby discovering the details of how what would otherwise be a tasty surfer babe came to be situated among a bunch of boogies. 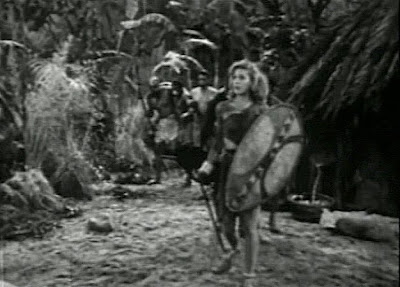 Unlike several other jungle girl movies that are content simply to give us a hot chick in an animal skin, this one also gives our girl a spear and a shield. Sort of the jungle equivalent to Barbie's Camaro.

Aw, you get the idea, and for a flick that’s less than seventy minutes long, it’s got loony to spare; it gets in there, does its stupid business, entertains, and then it’s over. A perfect B-movie confection. RECOMMENDED (and it's dirt-cheap!) 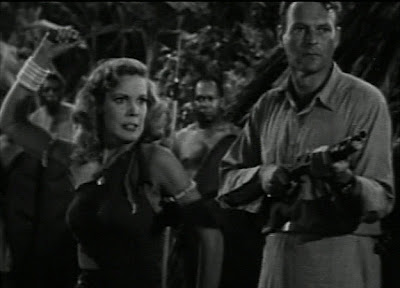 The most important lesson learned from this film is this: never piss off a jungle chick... 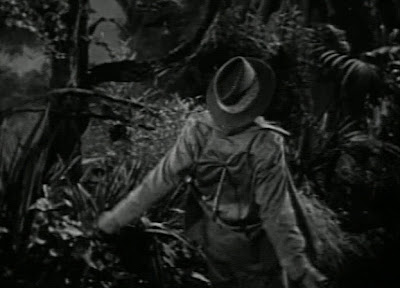 ...especially when her knife-throwing skills are on par with those of Willie Garvin.
Posted by Bunche (pop culture ronin) at Friday, April 16, 2010