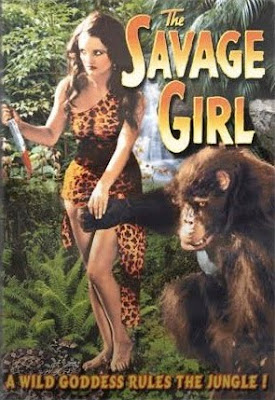 A prime example of pre-Hays Code schlock that appears to be a hastily made cash-in on the Johnny Weissmuller TARZAN THE APE MAN (which was released to rousing success some eight months previous), Monarch Film Corporation's (who?) THE SAVAGE GIRL is just about as slapdash as a film can be, but it's a mercifully short 66 minutes in running time and features some major league eye-candy in the toothsome form of actress Rochelle Hudson (who, according to the stats available on the IMDB, was sixteen at the time of the film's release, so I'm now officially a dirty old man).

What does it say when a film opens, as this one does, with a text crawl that pleads its case by imploring the audience to pretty much think, "Aah, we all know this movie is a stupid piece of crap, so who gives a fuck?" Giving not one good goddamn about such things as logic or even basic story structure, the filmmakers take us along for an African expedition funded by eccentric comedic alcoholic millionaire Amos P. Stitch (Harry C. Myers), who, along with generic semi-British-accented great white hunter Jim Franklin (Walter Byron) and drunken German guide Alec Bernouth (Adolph Millar), set off to procure animals for Stitch's personal zoo. Upon arriving in "Africa" — aka an obvious Poverty Row jungle backlot somewhere in California — the cast find themselves among and array of incongruously-situated animals that seem to have been dropped from random points all over the continent into one convenient location, some actually on-set, the rest seen in tons of over-exposed stock footage. 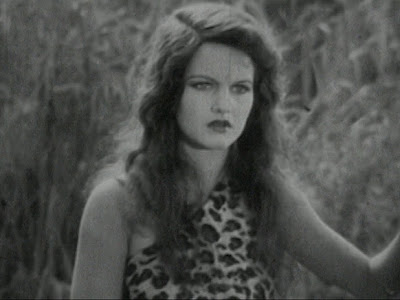 Rochelle Hudson as the unnamed jungle girl.
After about twenty minutes of our intrepid heroes traipsing around the jungle capturing assorted beasts and indulging in hoary comedy, the title character finally — thankfully! — shows up, and she is one stunning animal print-clad critter. A dark-haired beauty with bright eyes and striking features, Rochelle Hudson is certainly easy on the eyes and definitely serves as a possible inspiration for fantasies far less wholesome than those found in the script (well, most of the script, but more on that later). Cribbing liberally from Weissmuller's template for a feral character, the unnamed jungle girl is silent and lives in perfect harmony with her animal companions, although her behavior is just about as sweet and girly as one would expect from a jungle heroine conceived in the Shirley Temple era (Maureen O'Sullivan's cultured but utterly capable Jane Parker being the much more interesting alternative). She engages in no knife or spear-armed throwdowns with wild animals or papier-mâché crocodiles (which the budget could have in no way allowed), instead spending her time merrily swinging on vines or sitting around cuddling with adorable little leopard cubs, and she comes into contact with the expedition when she spies upon them as they capture some of her animal neighbors. 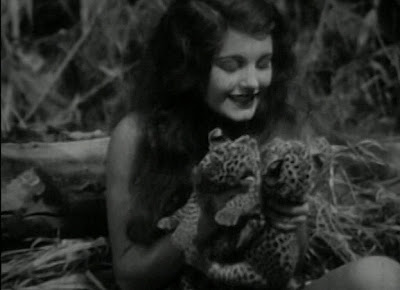 Our nature girl: so sweet and wholesome that her handling of leopard cubs does not arouse their mother's fanged and clawed ire.

When she frees the animals in the middle of the night, the drunken German immediately twigs to the culprit being the local "jungle goddess," but his warnings are laughed off by Franklin and Stitch. Nonetheless, a pit is dug in which to trap the jungle goddess, and when she is caught all are surprised to find a hot white girl in Tarzan-knockoff drag in the middle of the jungle. Oh, and at no point in the story is any explanation given as to exactly who this girl is or how she got there, nor how and why the local requisite "ooga boga" natives came to worship and fear her (the latter aspect of which is especially confusing since she's such a sweetie). 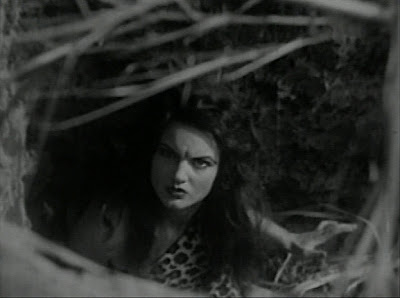 Our heroine, captured by white folks!
Once in the hands of the white folks, the jungle girl puts up a futile fight as the white men imprison her in a crude shack. She quickly figures out that Stitch and Franklin have no intention of harming her — especially not Franklin, whom she realizes is kind after seeing him remove a thorn from a monkey's paw and then gently petting the beast, who does not mind in the least — but the drunken German makes no bones about his intent to rape our nature girl. 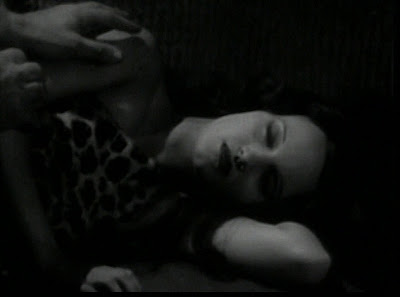 Our heroine, about to fall prey to a drunk and lustful Kraut.

Bernouth attempts to violate our heroine in no uncertain terms (in a scene that shocked me, especially considering when the film was made) but her screams attract the attention of Franklin, who arrives just in time to prevent the foul crime and hand the Teutonic turd a thrashing before kicking him out of the expedition and letting the jungle girl go free. Our heroine does not stay gone for long though, because Franklin's act of gallantry ignites the jungle girl's spark of interest into full-on and surprisingly aggressive lust that, thanks to his 1930's-style Britishness, our bland hero stupidly does his (rather ineffectual) best to dissuade. 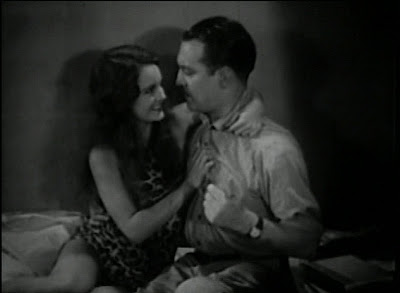 Portrait of one seriously dumb Brit.

Meanwhile, the pissed-off and rape-denied German fucks off to the local "ooga booga" natives and tells them (via a translator) that the other white guys have captured their white goddess, so he suggests that they not only attack the expedition but also make Franklin into a sacrifice to their voodoo god. (How they'd know which white guy was Franklin is anyone's guess, but I'll let it slide.) The natives attack while Stitch and his servant are off testing the boozy tycoon's theories regarding elephants and their fear response to common pet shop mice (don't ask) and Franklin is captured and promptly tied to a stake in preparation for the religious festivities, and once Franklin's securely trussed up, Bernouth has the unmitigated nerve to gloat to our bland hero's face and admonish him for "not wanting to share her" with him, as well as smugly announcing that he now intends to go back to the camp and finish what he started with the jungle girl. 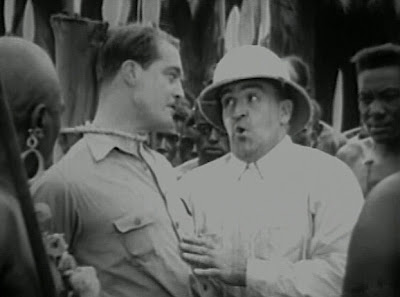 "Oh, vot I em goink to do to her..."
Leaving Franklin to his fate, the merry would-be sexual assaulter arrives at the camp, claims the other white guys are dead, thus obviously meaning he's now the boss, after which he enters the hut where our heroine is hanging out and once more attempts to get his rape on. 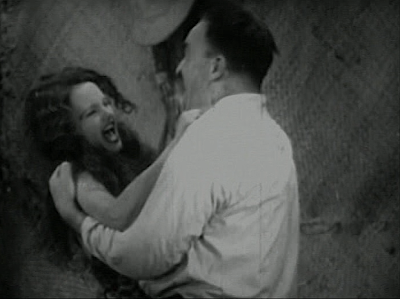 Not that she was any kind of tough in the first place, our heroine is quite clearly overmatched as the laughing Kraut mauls her and throws her around the room (you will get as irate as I did when you witness this atrocity), but our bland hero is rescued by the tipsy tycoon and immediately runs to the rescue since the millionaire's cab has inconveniently run out of gas (don't ask). Upon returning to the camp, our bland hero gets into a lackluster fight to the finish with the German asshole, and when shit gets too thick the vile villain readies himself to draw a gun. That underhanded plan of action is quite decisively thwarted when, alerted by our heroine's chimp pal, a hulking guy in a tatty gorilla suit rips the bars off the window behind the German and drags him to a well-deserved end (which I hope included him getting ass-fucked by the bargain basement Kong). 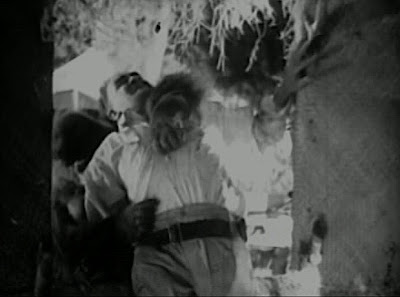 A noble gorilla takes a stand against "that sort of thing."
At last all is well and our lovers prepare to make the beats with two backs, but the film abruptly comes to screeching halt before we get to the good stuff. 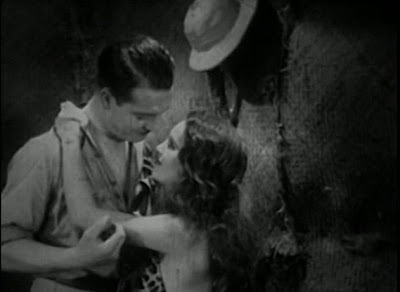 The lovers prepare to get it on... 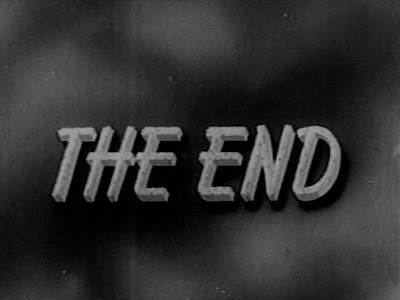 ...and then the movie just comes to a screeching halt. What the fuck? TARZAN AND HIS MATE this ain't!

In fact, the movie ends so fast that you hardly have time to process that it's over, an aspect that prompted me to say aloud, "That's it? Seriously, movie? You're gonna go with that ending? Ooookaaaay..." There's no denouement, no attempt at wrapping things up or possibly explaining what's next for our characters. It just stops as if someone pulled the plug. TARZAN AND HIS MATE (1934) this ain't, that much I can tell you. Nonetheless, THE SAVAGE GIRL is not without its merits and its brief running time doesn't really give viewers the change to grow bored. The chief attraction here is obviously Hudson's gorgeous unnamed jungle ingenue, and when all is said and done that's all that really matters. I would have appreciated it if they'd bothered to give her some copper wrist adornments or a spear, though... 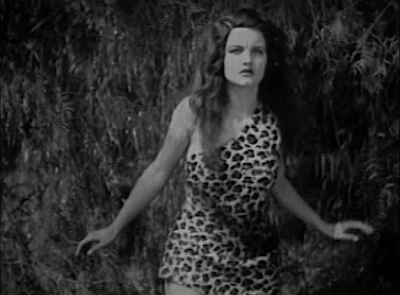 Rochelle Hudson: the #1 reason to sit through this time-waster.
Posted by Bunche (pop culture ronin) at Sunday, April 11, 2010

You know I have to go find this now, right?