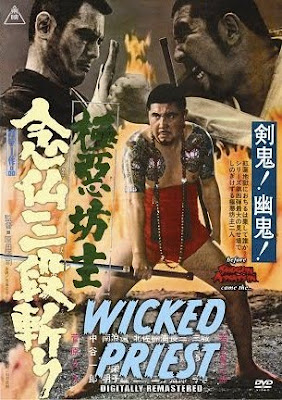 I finally got around to checking out the first in the GOKUAKU BOZU (“Wicked Priest”) series of chambara (“swordfighting”) flicks and was not disappointed in the least, thanks in no small part to the performance of my man Tomisaburo Wakayama in the title role. For those not in the know, Wakayama was the intensely stoic actor who played Itto Ogami in the LONE WOLF AND CUB films, and if you’ve seen those you know that the guy was one hell of an actor and absolutely the very last guy you would ever think about engaging in sword combat. 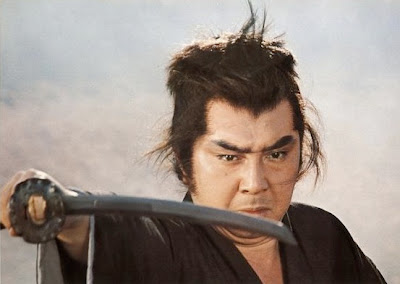 Portrait of a complete and utter badass: the late, great Tomisaburo Wakayama in his signature role of Itto Ogami in the LONE WOLF AND CUB series (1972-1974).

Wakayama’s swordsmanship is a thing of beauty to behold, on the level of Baryshnikov or Bruce Lee in terms of physical wonder, as is that of his equally talented younger brother, Shintaro Katsu, aka Zatoichi, but I’m veering quite a bit off topic. The LONE WOLF AND CUB and Zatoichi films are more than worthy of their own discussions, so I’ll just leave you with a recommendation to see them and get back to the Wicked Priest.

The GOKUAKU BOZU films preceded Wakayama’s work as Lone Wolf and will come as a bit of a surprise to those who know him only from his later, ultra-gory Itto Ogami movies because, although quite the capable badass, the protagonist of the GOKUAKU BOZU series is an all-around fun guy who thoroughly enjoys life, in other words the polar opposite of Ogami. Here Wakayama portrays Shinkai, a Buddhist monk in the Japan of the 1920’s who ends up getting booted from his order on a bullshit charge and is relegated to a one-year probationary exile to some backwater town’s temple. Cut to five years later and Shinkai is seen having a blast engaging in all the stuff an observant Buddhist monk is not supposed to be doing, namely gambling, drinking, merrily frequenting whorehouses, getting into karate/jiu jitsu fights in which he is clearly the baddest motherfucker in the room (even when faced with firearms), and seducing married female temple-goers.

Pussy and saké: two great things that go great together!
He’s a lovable and fun guy who performs his duties as the town’s monk (always for an expected fee, er, “donation”), but his lust for life only earns him the bitter hatred and disgust of the rather corrupt priests in his former order, a pack of total assholes who get up to all kinds of shit while putting out a public front of piety and respectability. Their abbot, however, is a decent guy who raised and has a tolerant and avuncular relationship with Shinkai and as a result looks the other way at the so-called wicked priest’s transgressions, an attitude that fosters plots for the abbot’s ousting in the face of disgrace under threat of blackmail for past indiscretions.

The main plot follows Shinkai’s bitchin’ and utterly shameless lifestyle and brings him into the path of young Kentaro, a rather ineffectual would-be yakuza tough guy who makes his questionable living by luring innocent young girls to his slimy boss’ whorehouse, where they are either forced into prostitution or sold into sex slavery in Shanghai. Kentaro cares nothing for the innocents whose lives he destroys, but his heart belongs to Kogiku, a sweet girl who is nearing the end of her three-year prostitution contract at the whorehouse, and the two intend to get married when her time is up. Kentaro meets Shinkai when the monk prevents him from luring yet another innocent, and the lad has his attitude seriously adjusted after Shinkai kicks his ass (twice) and those of his goofy accomplices. You see, although he’s a rampant womanizer who enjoys the pleasures of women, Shinkai genuinely likes women as people — a breath of fresh air in this misogyny-laden genre — and will brook no mistreatment of the fair sex, so he seeks to stop Kentaro’s foul ways before the boy is beyond redemption (too late if you ask me, but I didn’t write the script). Learning from Shinkai’s example — to say nothing of the aforementioned pair of back-to-back bitch-slapped beatdowns — Kentaro tries to get his act together for when he and Kogiku get married, but his refusal to further deceive innocent women for purposes of exploiting them does not sit well with his scumbag boss, so what follows is a tragic tale of escalating cruelties that sees the abuse and death of assorted innocent people that finally galvanizes Shinkai to hand down some much-deserved death to bad guys who seriously need to be removed from the face of the earth. (NOTE: unlike what is depicted on the film’s poster/DVD box art, at no point does Shinkai personally engage in any swordfighting, so Lone Wolf fans, caveat emptor.)

While this synopsis may make the film sound action-packed, the truth of the matter is that it’s more of a study of the fun-loving Shinkai and the peripheral characters than the swords-a-slashin’ bloodbath one usually expects (and gets) from this kind of flick, and the film is all the better for that. Chambara cinema is rife with drama and tragedy and could be fairly described as soap operas for men, and to a certain extent that’s exactly what this first GOKUAKU BOZU film is. There are highly emotional subplots involving single-parenthood and the stigma that falls upon the women who selflessly raise their bastard kids in the place of social ostracism, bitter daddy issues from the perspective of now-grown abandoned children, political intrigue within the monastic order, sympathy for the plight of whores, and a whole bunch of other stuff, so if you decide to check this out, be prepared for more plot than action, but also keep in mind that you will not be bored. It’s not a classic or anything, but it is solidly entertaining from start to finish.

From what I could determine in my admittedly brief research on it, there are apparently five films in the GOKUAKU BOZU series and I am eager to sit through the rest of them. I picked up four of them when I came across them a while back, but the one I’m missing is the second one in the sequence, so I’m going to hold off until I can find it and then continue, While not all chambara series continue directly from one film to another, there are many that do, so I’ll err on the side of patience and wait to experience some more cinema of Wakayama that I have not yet seen. He’s one of my all-time favorite actors and ass-kickers, so I’m perfectly happy to endure the wait.
Posted by Bunche (pop culture ronin) at Saturday, April 03, 2010