LADY SNOWBLOOD AT THE JAPAN SOCIETY 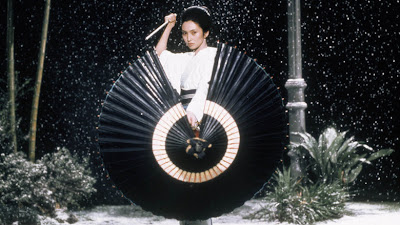 A study in lethal elegance: Meiko Kaji as the vengeful Yuki.
Last night I went to Manhattan's Japan Society to see a rare screening of LADY SNOWBLOOD (1973), and while the movie was excellent and remains one of my favorite chambara films, I was once more reminded of why I fucking hate seeing just about any Asian film in a festival setting with a New York audience. A page from the original manga, illustrated by Kazuo Kimamura.

Based on an early-1970's manga series written by LONE WOLF AND CUB scribe Kazuo Koike and illustrator Kazuo Kimamura, LADY SNOWBLOOD is the grim tale of Yuki (the haunting Meiko Kaji), a woman literally born to avenge the heinous murders of her father and older brother, as well as the serial rape of her mother by one of the killers. Upon stabbing her rapist to death, Yuki's mother is sentenced to life in prison, where the woman proceeds to indiscriminately have sex with every available male guard in the place, earning her the hatred of the other female prisoners and a reputation as "a bitch in heat," in hope of giving birth to a strong son who can carry out her wished-for vengeance. Instead of a son, she gives birth to Yuki and dies shortly thereafter, and the baby is entrusted to another prisoner who, upon the completion of her sentence, raises the girl with a retired master swordsman who is now a monk. From early childhood, poor Yuki is forged into a stoic engine of her dead mother's vendetta, trained without mercy in various skills, but most importantly as a swift and utterly deadly swordswoman who conceals her blade in her parasol. Upon turning twenty, Yuki — now operating under the nom de revenge "Lady Snowblood" — embarks on a bloody trail of retribution as she seeks out the three remaining villains who have gone unpunished for the past two decades, slashing her way through all comers in the process.

As is typical of chambara films of the period, LADY SNOWBLOOD is drenched in spewing arterial spray that looks a lot like thinned-out red paint and is over-the-top along the lines of the Black Knight sequence in MONTY PYTHON AND THE HOLY GRAIL (1975), but while the Python flick played its graphic violence to stunning and hilarious comedic effect, the gore in LADY SNOWBLOOD has the exact opposite intention and its excesses serve to punctuate a story that's already as serious and depressing as a heart attack. Which brings me to the point where I start bitching and moaning.

One of the things that drives fans of Asian cinema in general and Japanese film in particular crazy is seeing screenings of Eastern movies among festival audiences composed of curiosity seekers who are unfamiliar with styles of filmmaking other than what they run into every week at their local multiplex. These moviegoers may have read or heard about Asian movies in some article extolling the perceived hipster virtues of getting into such stuff, and so off they go to an Asian film festival and collide head-on with another culture's style of film craft, often with zero grounding in how that culture tells stories, or what those storytelling tropes mean within that rich cultural context. While filmmakers like Kurosawa strove toward and achieved stunning results with a realistic approach, many of the makers of Japanese film sought to appeal to an audience raised on centuries-old traditions of unabashed melodrama, stories marked with sometimes broad and over-wrought emoting and lashings of sanguinary displays that straddle the line between intentionally excessive narrative punctuation and seemingly pointless gratuitousness. When it comes to their storytelling, the Japanese tend to milk a narrative for all that it's worth, bringing audiences heroes who are practically superhuman in terms of their skills, focus and virtues, villains who are vile in ways that make you want to leap onto the screen and kill them yourself, and sequences of action that take things to completely insane levels of carnage, all in the name of keeping the paying theater-goers entertained. In that respect, Japanese cinema has a hell of a lot in common with our own home-grown efforts, but the difference lies in cultural aesthetics, and that's where the problems can start.

While watching LADY SNOWBLOOD, in an audience containing a large percentage of Japanese attendees, the majority of the Westerners in the theater laughed heartily at the melodrama of the piece, despite the fact that the movie contains not one shred of anything that could be considered comedy. As you can gather from my brief synopsis, the story is one very dark motherfucker, yet many in the audience cracked up repeatedly, offering up interjections of "Sweet!" or "Nice!" during moments of raw emotion and terrible violence. The one gory image that did not elicit would-be-ironic comment from the hipster Peanut Gallery was a stark flashback shot of Yuki's perhaps eight-year-old brother laying dead by the side of a river after the killers bashed his brains in, immediately after which we are treated to the (thankfully) non-explicit rape of Yuki's mother as the criminals turn the violation into drunken entertainment (one of their number is even a woman who takes obvious enjoyment in watching the proceedings).

While I'm a big fan of LADY SNOWBLOOD, I'm the first to note that, though compelling, it's a very depressing affair for a number of reasons, and even given the cross-cultural disconnect of Eastern versus Western sensibilities, I was appalled at anyone finding the tragedy that played out onscreen as funny. LADY SNOWBLOOD's melodrama was roundly mocked by an amused audience that could most likely watch American soap operas and not crack jokes about the over-the-top emotional torments endured by the characters, and it just brought me down. Would they have found the very same elements laughable if they had been presented in the context of a Clint Eastwood western? I kinda doubt it. Then again, I've heard reliable reports from people who were in the audience when the infamous and ultra-graphic to the point of being nigh-unwatchable gang-rape landmark I SPIT ON YOUR GRAVE played theatrically, and they said that several members of that audience cat-called and guffawed as actress Camille Keaton (Buster Keaton's grand-niece, by the way) was put through abuses that would have offended the most hardened of regular grindhouse patrons, so I guess such inappropriate and disheartening reactions are nothing new. 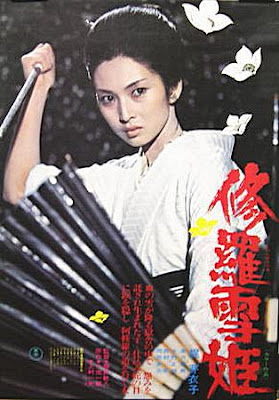 Poster from the original Japanese theatrical release.
Anyway, my experience last night was very much off-putting and on several occasions I wanted to stand up and scream "What the fuck are you people finding so goddamned funny? Does human suffering amuse you?" I had not attended an Asian film festival since the mid-1990's and after last night I plan on resuming that stance, unless there's a decent marathon of Toho's giant monster flicks or a run of the LONE WOLF AND CUB films. I just wish those shit-for-brains sunsabitches would stick to their multiplexes and showings of TRANSFORMERS: REVENGE OF THE FALLEN and suchlike...

Oh, and for a more clinical overview of exactly what LADY SNOWBLOOD is all about, check out the excellent review found here.
Posted by Bunche (pop culture ronin) at Sunday, April 04, 2010

I wanted to let you know how much I'm enjoying your reviews. I found you through The Mandingo Project, checked to see what you were writing about lately, and discovered that you and my wife have very similar tastes. Lots of good ideas for the Netflix queue. Thanks.

I used to feel the same when first encountering HK cinema at festivals. I get that certain things don't culturally cross over, and therefore provoke laughter. The subtitles alone were often hilarious. But it doesn't make the whole fucking movie a comedy. At a certain point I just wanted to settle in and get into the movie, and what was preventing that was the audience and their pathological need to feel ironically detached and superior to whatever was presented on the screen. I'd start to go a little berserk in my head, and by the last reel I'd want to get up and Chow Yun-Fat all the fuckers and put them out of their hipster misery.