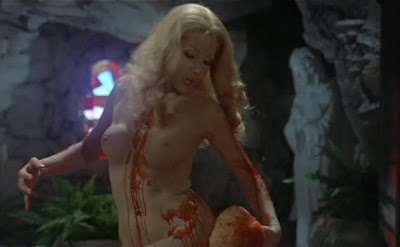 Ingrid Pitt as the title character, freshening up with the blood of one of her many innocent victims.

Britain's Hammer Films was renowned for infusing the somewhat moribund U.K. horror market with an instantly identifiable look, atmosphere and tone, as well as spicing things up with a then-controversial emphasis on graphic gruesomeness and sexual content, and as their movies progressed from the 1950's into the 1970's the stakes were raised when studio went all out in an attempt to win back an audience stolen by filmmakers who gave audiences lurid concoctions filled with content that reveled in explicitness at the cost of both story and good taste. Not being one to gone down without a fight, Hammer sexed things up considerably in its waning years, famously coming up with their lesbian vampire "Karnstein trilogy," consisting of THE VAMPIRE LOVERS (1970), LUST FOR A VAMPIRE (1971) and TWINS OF EVIL (1972), each drawing inspiration from Joseph Sheridan Le Fanu's 1872 novella CARMILLA. That trio of films has a fond place in the hearts of many Hammer-philes and soft-core lezzie flick junkies, largely for coming off like better-produced installments of the old DARK SHADOWS soap opera, only with shitloads of tits, ass and Seventies bushola. Looked at now, especially in the wake of far more graphic material, it's a little hard to see what the big deal about the Karnstein trilogy was (with THE VAMPIRE LOVERS easily being the best of the lot), and that confusion is only further compounded when one takes time to consider 1970's COUNTESS DRACULA, a film that could easily have been shoehorned into the whole Karnstein thing, but wasn't.

Borrowing from the real-life atrocities committed by Hungarian Countess Erzsebet Bathory (1560-1614), COUNTESS DRACULA casts sultry Polish-born Ingrid Pitt (born Ingoushka Petrov, but a fox is still a fox by any other name) as Countess Elizabeth Nadasdy, an aged, hateful, cunty and generally evil bitch and a half who cares not one whit for the impoverished plight of her fearful subjects. When her husband dies and a number of friends and relatives are summoned for the reading of his will, among those who arrive is Lt. Imre Toth (Sandor Eles), the son of one of the Count's old war buddies, and the crone-like Countess feels her nethers twitch at the mere sight of him. Her attraction to the young officer does not go unnoticed by castle steward and all-around asshole Captain Dobi (Nigel Green, better known as Hercules in JASON AND THE ARGONAUTS), who has been putting the meat to the Countess for years and for some reason loves the miserable old bitch, and now that the Countess is legally free he seeks to rightfully acquire more power and position through marrying her. The Countess' young daughter, who was sent away to safety some two decades early in the face of a Turkish invasion, is also on her way home for the reading of the will, but while she's in transit the Countess accidentally discovers that she can regain her youth by bathing in the blood of young women, so the Countess arranges to have her own daughter waylaid and imprisoned in a woodland shack so she can assume the poor girl's identity and woo the young Lieutenant (much to Captain Dobi's chagrin). 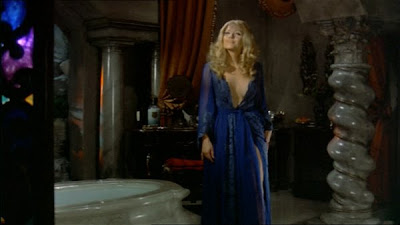 The Countess rejuvenated.
The Countess has a grand old time as her own daughter and since since no one in the court has seen the girl in twenty years, no one is any the wiser (except for the Countess' handmaiden and willing accomplice, Julie), but things begin to fall apart when the restored youth proves temporary and brings even more severe aging when it wears off, prompting the Countess to have a growing body count of girls brought to her for slaughter. But when the Countess bathes in the blood of the village's cheapest whore (Andrea Lawrence), she ages to a point where she resembles a bowl of dry corn flakes, which leads to the discovery that the magical youth restoration only works properly with the blood of virgins. 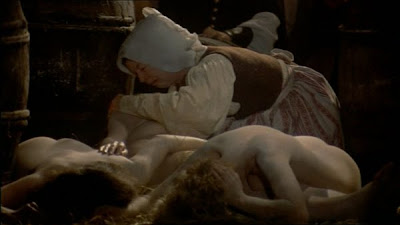 The Countess' victims are discovered.
Once that bit's been sussed out, the murders continue right up to the point when the Countess is ready to publicly marry the Lieutenant (who now knows the truth and has been blackmailed with going along with the Countess' plans or else be framed for all the murders), but she doesn't count on her daughter having escaped from the shack in the woods, or her youth wearing off in front of dozens of witnesses...

Though technically not a vampire film, COUNTESS DRACULA certainly has the look and feel of one of Hammer's several vampire flicks, but it unfortunately lacks the verve and interest found in its brethren. The film is very slow-moving and surprisingly sparse on the sex and gore one had by this point come to expect from Hammer, with very little blood actually seen except for that found in the memorable sponge bath sequence (a shot from which opens this post), and the film's requisite nudity mostly supplied by the sponge bath and a bit where the Countess and the Lieutenant get their hump on in a haystack as the Lieutenant hungrily noshes on the Countess' "lefty." Despite years of having seen the blood-smeared Ingrid Pitt in various books and magazines on horror movies and being led to believe that COUNTESS DRACULA was much more than the meager sum of its parts, I have to confess to being majorly disappointed by it and recommend it only for Hammer/vampire completists and those desperate for even a glimpse of nude female flesh (there's no bushola in this since it was rated PG during its American release). Nonetheless, both Pitt and the movie in general are quite appealing to the eye.
Posted by Bunche (pop culture ronin) at Wednesday, April 07, 2010