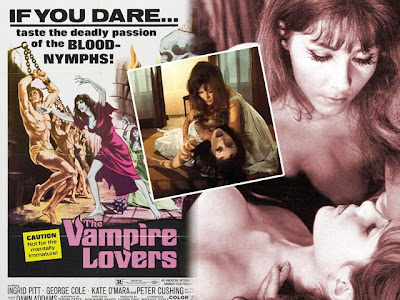 This first in Hammer Films’ “Karnstein trilogy” — comprised of THE VAMPIRE LOVERS, LUST FOR A VAMPIRE (1971) and TWINS OF EVIL (1972) — is far and away the best of the lot and deservedly made a horror star out of Polish-born Ingrid Pitt. Though rather tame by current standards, THE VAMPIRE LOVERS was just the hit that the ailing Hammer studio needed, fueled by a letter perfect combination of the usual Hammer tone and the then-new explicit rather than implicit lesbian angle allowable thanks to British censors shifting the “X” certificate from age sixteen and over for admission to eighteen and over (essentially equivalent to the MPAA’s “R” rating and allowing for nudity, simulated sex and gore, but not gynecologically detailed or pornographic content). 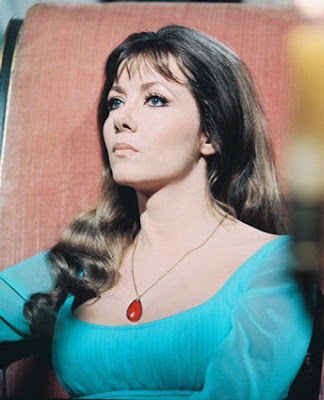 Based on Joseph Sheridan Le Fanu’s novella CARMILLA (1875), THE VAMPIRE LOVERS lays out the eerie events set in motion in the early 1800’s (I think) when a beautiful and mysterious woman (Ingrid Pitt) arrives in the Duchy of Stiri and works her way through the populace, killing off members of the local populace with her vampiric feeding. Her M.O. is to insinuate herself into the house of an aristocratic family and feed on that family’s virginal young daughter (who is invariably cute as hell) until the girl wastes away, presumably because of anemia, and then the sultry vampiress moves on to her next victim. The vampire in question is Mircalla Karnstein, the last of a line of undead suckfaces who were believed wiped out years earlier, and she operates under the anagrammatically rearranged monikers of “Marcilla” and “Carmilla,” as the possibly unwilling thrall of a mysterious horseback-mounted man in black John Forbes-Robertson) who’s obviously a master vampire. First working her baleful magic upon the niece of General Spielsdorf (Hammer mainstay Peter Cushing, in a role that amounts to slightly more than a cameo), the vampiress soon moves on to the doll-like and smokin’ hot Emma Morton (the adorable ginger-tressed Madeline Smith, who sports a pair of alabaster Brit-breasts that you just want to latch onto with eager lips and tongue), and it’s that literally unnatural relationship that drives the movie. 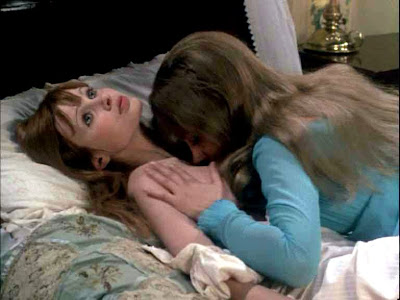 Carmilla and Emma share a tender moment.
As the vampiress slowly drains away the poor girl’s life, members of the household slowly twig to what’s up, so it’s only a matter of time until Emma lies dead or Mircalla is thwarted. Let us not forget that Peter Cushing, cinema’s most notable and formidable Van Helsing, is in this flick, so it’s a no-brainer as to how thing simply must turn out; following the miserable demise of his niece, Cushing’s General seeks the aid and advice of Baron Hartog (Douglas Wilmer), who some years earlier avenged the death of his own daughter by taking out what was presumed to be the last of the vile Karnstein clan, and from there it’s time to kick some fanged ass.

Though set in various identifiable European locales and sometimes foreign lands such as Egypt, the Hammer horror world may as well all take place in the same stylized realm, so instantly recognizable is their atmospheric style. Replete with isolated country back-roads, misty graveyards, busty peasant women in dairy-showcasing bodices — one of the things that got me into these films during my formative years — and lavish period sets and costumes that drive home the fantasy and bring to mind MASTERPIECE THEATER as filtered through a Dan Curtis sensibility, the Hammer efforts are as unique and fun as the Universal Studios that preceded them. The Universal influence comes as zero surprise since Hammer’s horror films launched from a template established by their Yank antecedents, starting in the 1950’s with gored-up re-interpretations of Dracula, Frankenstein and the Mummy, followed later by their take on the Wolf Man, and those films were always worth a look. Filled with terrific eerie visuals, including a great bit with an earlier Karnstein lady searching the graveyard for her burial shroud (without which she cannot return to her tomb) and two shocking beheadings by sword. THE VAMPIRE LOVERS has much to savor from both the visual and narrative standpoints, and its interest has only increased with each passing year.

Perhaps most renowned for its lesbian content, the film is nowhere near as shocking in that respect as it was some forty years ago, and when looked at today it reveals layers far more rich than its initial prurient value. Mircalla does not appear to enjoy her state as one of the undead and seems to commit her evil acts either as a result of being compelled to do so by the mysterious (and unexplained) man in black, the occasional basic need for sanguinary sustenance or simply out of a need to defend herself against those who have figured out what she is. When it comes to her relationship with Emma, what at first may seem predatory or a symbolic mission to destroy innocence in the face of the girl’s obvious and untried womanhood is revealed to be a genuine affection, and Mircalla prolongs the inevitable by feeding on a couple of unfortunate locals so she can enjoy as much time with her inamorata as possible. The scenes of sexual intimacy between “Carmilla” and Emma are tastefully handled and have an almost childlike innocence in their emotional content, at least until the vampiress kisses her way south — if you know what I mean and I think you do — as the camera remains focused one the wide-eyed and ecstatic face of Emma.

Which brings me to Ingrid Pitt. One of the short list of indelible female figures in pre-1980’s horror cinema, Pitt simply owns THE VAMPIRE LOVERS in much the same way as THE EMPIRE STRIKES BACK was Darth Vader’s movie and I simply cannot picture anyone else in the role of Mircalla (unless the film was remade with Monica Bellucci). Pitt’s vampire is graceful, somewhat terse unless interacting with the object of her desire, and wears an expression that’s a curious mix of indifference and resignation to her lot in un-life. Mircalla is definitely creepy, but there is some indefinable something about her that evokes sadness to such a degree that one almost cannot help but pity her despite the trail of carnage she leaves in her wake. Pitt is also extremely easy on the eyes and has an air of commanding elegance that is evident even when she’s sponging her nekkid self in a bathtub or frolicking topless with Emma during a preamble to their first Sapphic encounter.

As I stated previously, the film’s naughty content is tame by modern standards, and I sat there for roughly the first half hour wondering why the film received an “R” rating form its U.S. release after witnessing only the most minor display of blood and one bare tit from the general’s niece during a brief post-mortem medical going-over, but then the bathtub scene where “Carmilla” engages in initially innocent girl time with Emma came on and all was right in the world…

THE VAMPIRE LOVERS is one of the last times when the horror engine that was Hammer fired on all cylinders, and it is very much recommended to horror fans and followers of the whole lesbian vampire sub-genre. Available on one of those reasonably priced MGM-released Midnite Movies DVDs in a double feature with the vastly inferior COUNTESS DRACULA, THE VAMPIRE LOVERS is a very welcome must-have for aficionados and those looking to remember the days before vampires were ruined by Anne Rice’s pussification and that fucking TWILIGHT bullshit. 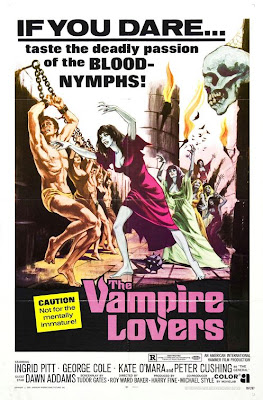 The marvelously cheesy poster from the American release. None of the stuff seen on this poster happens in the movie.
Posted by Bunche (pop culture ronin) at Thursday, April 08, 2010

this is a good review, but when are you going to review the "Twilight Saga?"

I already reviewed the first TWILIGHT flick last year in a double feature critique alongside the unimaginably superior LET THE RIGHT ONE IN. I'll get to the second one soon. It's actually on my "to do" list.

"Let The Right One In" was sheer genius!

Agreed. Although Twins of Evil remains my favorite of that series (my favorite Hammer film ever, for that matter), The Vampire Lovers is a vastly superior film. (Personally, I enjoy Twins more for its unabashed cheese-gone-wild than for its questionable merits as a film.)