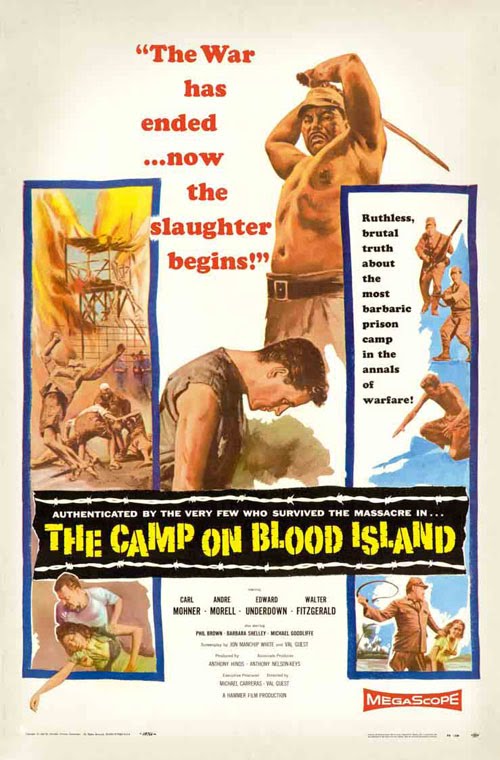 Having grown up on the lurid (though well-made) fare put out by Britain's venerable Hammer Films, I expected a lot from this black and white tale of the horrors faced by the mostly British captives in a Japanese prisoner of war camp during the ass-end of WWII. Over the years I'd heard that it amounted to pretty much an old school exploitation flicks that wallowed in the kind of cruelty and human misery one would expect from such a film, but what I got when I finally saw it was an admittedly well-acted but tepid (by today's standards) potboiler that was worth sitting through and then moving on to whatever else the viewer had on their agenda for that day.

In a nutshell, THE CAMP ON BLOOD ISLAND takes us through the degradations that the prisoners endure at the hands of an uber-sadistic Japanese commandant and his cruel pack of giggling soldiers, while they continually sabotage the camp's radio system. That bit of sabotage prevents the Japanese from finding out what the prisoners have already discovered, specifically that the Japan has surrendered and the war is over. It's vital to keep that news from the commandant because he has publicly stated that if the Japanese win the war, the prisoners will be allowed to live and serve the Japanese empire, presumably in a slave labor capacity, but if Japan loses the war, all prisoners, be they man, woman or child, will be horribly put to death and the camp will be burned to the ground, leaving behind no evidence of the atrocities committed. Displaying the stiffest of upper lips, British Col. Lambert (Andre Morell) enforces strict discipline among his men while keeping the news of the end of the war from them, hoping all the while that the Allies will arrive before the camp's commandant is updated on the status of the war. The litany of suffering piles up in both the men's and women's camps, including petty bullying at gunpoint, men ordered to dig their own graves for the amusement of the Japanese and then immediately shot into the freshly-completed holes with machine gun-fire, a female prisoner prostituting herself to the Japanese in exchange for lighter treatment (which earns her the ire of the women imprisoned with her), the burning of the prisoners' long-withheld mail as a punishment, and so on, until an Allied plane is spotted coming down somewhere over the island. American pilot Lt. Peter Bellamy (Phil Brown) survives the crash and is immediately captured by the Japanese, an act that confuses him since the war is over. Before he can inform the Japanese of that fact, he is warned to keep quiet by a just-apprehended escapee, one of Col. Lambert's men, so Bellamy is soon cast among the British prisoners after a severe whipping by the Japanese commandant. With all the players in place, the prisoners realize that it's a mater of perhaps a day or two before the commandant gets wind of the war being over and embarking on the mass slaughter of the prisoners, so Col. Lambert alerts his men to fashion weapons out of whatever they can get their hands on and prepare for the fight of their lives; if they have to die, they'll take as many Japanese with them as possible, giving the bastards a good old-fashioned British "Fuck you, yellow scum." Meanwhile, Bellamy and the crew's Dutch radio expert — imaginatively dubbed "Dutch" — escape from the men's camp and set off to the women's camp in search of the one female prisoner (Barbara Shelley) who can guide them to a transmitter so they can call in the Allies for help. Many of the standard WWII movie tropes are then trotted out and things finally end with the eventual arrival of the Allies, but Col. Lambert is left to consider how many good men he lost due to the cruelties of the Japanese and his own stern demands.

I've never been much of a war movie fan and I have certainly seen far worse films than THE CAMP ON BLOOD ISLAND, but this once shocking entry into the genre does not really hold up well today, what with it's moments of contrived "rah rah" heroism and almost laughably stiff British stock characters. This kind of thing has become so ingrained into the culture of cinema that one barely even needs to have seen a British P.O.W. flick to be familiar with the cliches because it's all been done to death, even before this film was made, and has since become fodder for endless parody, as was often the case on MONTY PYTHON'S FLYING CIRCUS. Ever wonder where Graham Chapman and John Cleese's letter-perfect British military officers came from? Look no further than films like this, war films that offer what were meant to be spirit-bolstering archetypes, but instead ended up as caricatures.

Also worth mentioning is the fact that all of the Japanese characters are played by British actors without the benefit of even the most rudimentary makeup attempts at making them look Asian, let alone specifically Japanese. They just affect stereotypical "Die, British pigs!" accents and speech patterns, which also were endlessly parodied by the Pythons, and at times the performances by the "Japanese" bad guys are just plain ridiculous. For those of an easily offended P.C. bent, I would advise giving this film a miss.

For all the stuff I've read over the years, THE CAMP ON BLOOD ISLAND's horrors are relatively mild (although I admit that I would not wish to endure any of them for real), and I was surprised by how relatively easy a time the female prisoners had. Considering that the commandant was recruited to his post on the island because of his reputation for gleeful sadism, I found it very hard to believe that he and his men didn't run roughshod over the girls in the worst ways possible (if you know what I mean, and I know that you do), instead of tolerating levels of insolence from the women that would have instantly earned the men a lead slug right in the face. That aspect may be due to censorship constraints of the time, but such treatment could have been tastefully alluded to without showing any actual nudity or on-camera rape. What happened to British female P.O.W.'s at the hands of the Japanese in real life was certainly no secret, and sacrificing that bit of awfulness greatly diminished film's much-vaunted realism.

Anyway, THE CAMP ON BLOOD ISLAND is worth checking out for Hammer fans who are familiar only with their legendary horror output, as well as for war movie completists, but anyone else may find it merely a passable way to kill eighty-eight minutes.
Posted by Bunche (pop culture ronin) at Saturday, April 24, 2010