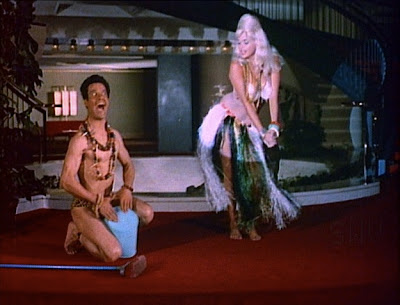 Sweet jumpin' Jesus in a basket of chicken...
Of the many blonde bombshells in 1950's and early 1960's cinema, my hands down favorite is the late Jayne Mansfield, visually an Al Capp cartoon fantasy brought to life and, perhaps somewhat incongruously, a card-carrying Mensa member and polyglot who spoke five languages. I mention this because just last night I indulged my ongoing savage/jungle girl fixation and once again checked out the hula dance sequence from PRIMITIVE LOVE (1964) in which Mansfield wiggles her way onstage in "native" gear and shakes her mighty flesh maracas to the music while driving the drummer into a state of flagrant and undisguised animal lust, and I have to tell you in no uncertain terms that watching her move in that bit makes my higher brain functions come to a complete halt. I have not seen the film that the sequence is from, so I do not know the context in which the scene is presented, but there is much to recommend it.

One of the several things that I find appealing about Mansfield is that she definitely had a sense of humor about her own cartoonish good looks, and that aspect informs the bizarro looniness of the hula sequence in question. After gyrating her way down a flight of stairs to a "native" beat provided on an overturned mop bucket, Mansfield shakes her impressive stuff all over the place as the drummer mugs like a total fucking maniac. 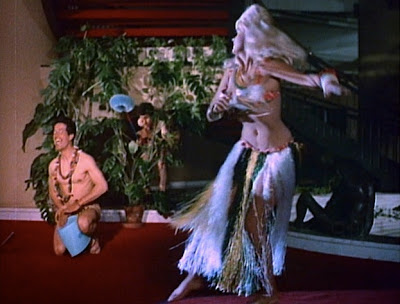 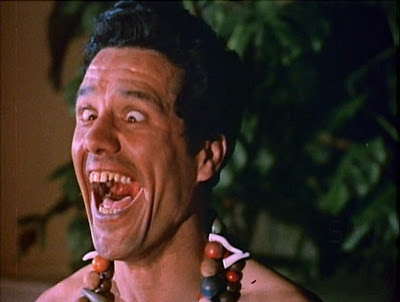 Folks, this is what happens when testosterone goes into overdrive. 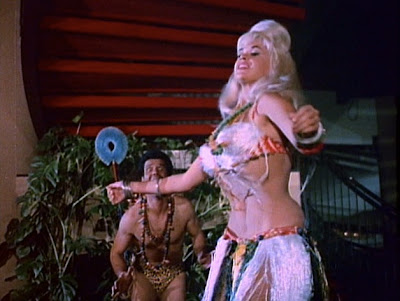 All of this frothing-at-the-mouth horniness and shaking of female flesh gloriously goes on while being observed by a strange fellow seen hanging out in the bushes and he is also clearly a master of rubber-faced emoting, although exactly what emotion he's trying to get across remains somewhat obscure. 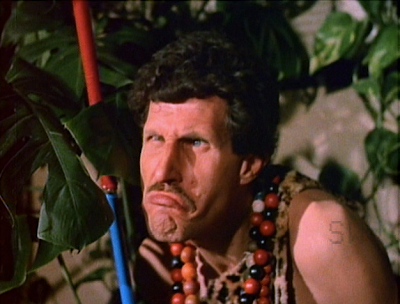 As the number wnds down, Mansfield heats up, eventually ending up flat on her back and undulating like a fish freshly pulled from its watery home and dropped unceremoniously upon the dry shore. 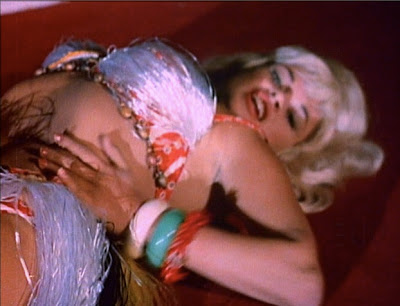 All of this proves too much for our drummer to withstand for another moment, so he abandons his drum... 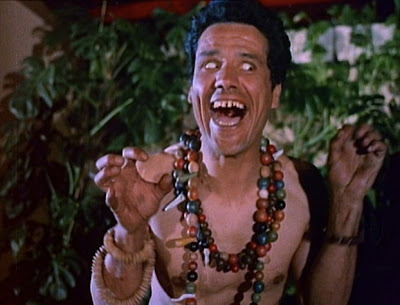 ...and scoops up the grimacing voyeur from the bushes. 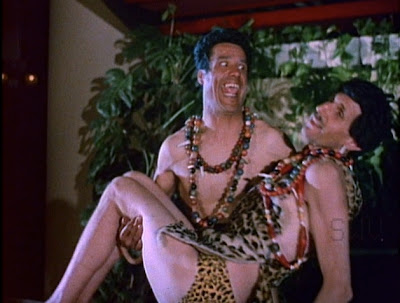 "Boing!!!" Sure, the drummer quickly drops the other dude, but what the fuck happened here?
Posted by Bunche (pop culture ronin) at Thursday, April 15, 2010

"What happened here" sums up my opinion of Franco Franchi and Ciccio Ingrassia.

After years of waiting to see Dr. Goldfoot and the Girl Bombs (no, really), these two clowns bumbled through the whole movie, wiping their stink on every scene they were in.

They're puzzling. I can't believe that sort of schitck was funny ever, much less popular enough to warrant inclusion in several movies. It's borderline repulsive, not at all funny, and just plain weird. Says a lot about the era, doesn't it? (I'd imagine future critics saying similar things about Jack Black and Adam Sandler... and maybe they'd be right.)