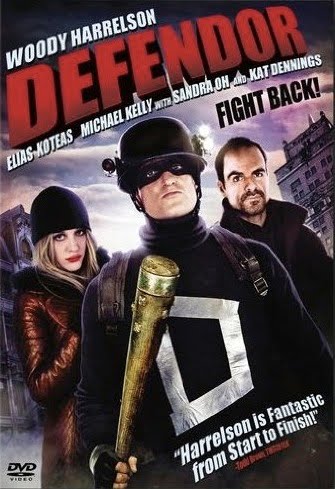 When I first heard about DEFENDOR sometime last year, several of the reviews described it as a straight-up comedy, something I readily bought into thanks to the film’s concept and the ludicrous DVD packaging image of a loony-faced Woody Harrelson decked out from head to toe in a zero budget superhero suit consisting of black tights, drawn-on Lone Ranger-style mask and a huge, crudely applied duct tape “D” emblazoned on his chest. Thinking I’d watch this alleged yuck-fest before seeing the similarly-themed and far more high-profile KICK-ASS, I ordered a used copy from Amazon and popped it into my DVD player, fully expecting to laugh at the antics of some delusional clown running around his city waging an inept one-man war against crime. From its opening sequence, it was readily apparent that DEFENDOR was something entirely other than just a comedy, and what I got from it was an unexpected surprise.

DEFENDOR’s narrative is revealed via a mostly linear series of flashbacks as its protagonist undergoes court-mandated therapy sessions administered by a kindly psychiatrist (the always reliable Sandra Oh), evaluations designed to determine if he is fit to be released back onto the streets after assaulting an apparently innocent store-owner. Arthur Poppington (Woody Harrelson) is a middle-aged mildly-retarded employee of his city’s municipal works department (he holds the reversible “STOP/SLOW” sign at construction traffic areas) who leads a double life as “Defendor,” a low rent, comic book-influenced protector of the innocent who seeks to bring down his mysterious arch-nemesis, “Captain Industry,” armed only with a studded truncheon, strategically thrown marbles, a jar of live wasps and a borderline-obsolete VHS camera with which to record evidence against the thugs he accosts. During the course of one of his nightly patrols as Defendor, Arthur encounters a corrupt drug enforcement cop (Elias Koteas) who is in the process of forcing an underage crack-addicted whore (Kat Dennings), who identifies herself as Angel but is actually named Katerina, to give him head. Arthur comes to the girl’s rescue and beats the shit out of the bent cop, making an enemy in the process and getting busted, thus making him a known entity down at the local precinct and inadvertently making it necessary for the girl to hide out until the crooked cop calms down (he and the young hooker have an unpleasant history).

The girl promptly moves into Arthur’s semi-squalid makeshift apartment (he lives illegally in a municipal works workshop) and, in the course of getting to know and form a touching friendship with the kind-hearted and honest man-child, Kat discovers his mission against Captain Industry and leads Arthur to believe that she knows where Captain Industry is, slowly doling out information at the price of forty dollars per day. The “Captain Industry” that Kat sends the hapless Arthur after is in actuality the bent cop, a guy Kat figures Arthur doesn’t stand a chance in hell of taking out, but she figures it’d be a good and convenient way for her to revenge herself against the bastard while also giving Arthur a living target for his rage. But what Kat does not know is just how corrupt the cop is, specifically that he’s deeply involved with a Serbian crime lord who runs drugs and traffics in sex-slaves, aided by a crew of brutal and heavily-armed bikers. As Arthur discovers more and more of the mobster’s doings, things swiftly rocket way out of his already tenuous control and the sincere and childlike would-be superhero finds himself square in the sights of the gangster, who orders a hit on the city’s protector… But exactly who is the mysterious Captain Industry? Is he merely a figment of Arthur’s developmentally challenged mind? Just what was it that motivated Arthur’s crusade against Captain Industry? And what led Kat to a life of teenage prostitution?

While it certainly has moments of humorous content, don’t let the poster image make you think for an instant that DEFENDOR is a comedy. The film is most definitely a drama and at its heart it’s a character study of a man whose innocence and sincere desire to be a socially helpful “good guy” touches and affects all of those who come within his misguided orbit. I’ve long held Harrelson to be among the most underrated and misunderstood actors of his generation, and the performance he gives as Arthur only adds to my opinion; his work here is deeply moving and rich with nuanced character that broke my heart as I watched Arthur’s largely impotent (to say nothing of physically damaging) struggle against society’s evils. I did not laugh at Arthur, but rather I shared in his frustrations and concerns, and I genuinely wanted to see him win out against odds that were so heavily stacked against him. Kat Dennings is very good as the teenage whore who definitely does not have a heart of gold, and she’s totally believable as her character is caught up in Arthur’s infantile altruism. The rest of the cast turns in fine performances, and the whole film displays a level of realism that I did not expect it to contain; when Arthur gets into set-tos with the creeps he seeks to thwart, he suffers serious injuries that land him in the hospital a few times, and the movie’s violence is not of the usual cinematic fantasy variety, but is instead of the bone-breaking, tooth-dislodging kind that’s all too recognizable from reality. While Arthur’s efforts are noble, they earn him ass-whuppings of the sort that no one in their right mind would wish to incur, but then again Arthur is clearly not mentally competent to fully understand the potential lethality of his mission. A defense of vigilantism this ain’t, and for that writer/director Peter Stebbings deserves to be commended.

Not at all the light diversion I expected to sit through, DEFENDOR is simply a minor gem that will hopefully find its audience on DVD. TRUST YER BUNCHE and give it a look, but keep in mind that while it has some feel-good elements, this is the first film in recent memory to make me cry.

Thanks for this review. I never heard of the film and kept seeing it in Redbox displays, so I thought it was some quick cash in of Kick Ass. However, seeing it had Woody in it, I knew it couldn't be cheap, and then I checked IMDB, where it had a stellar rating (although those are notoriously shaky on new releases).

Still, I'll take your recommendation, plunk down a dollar and give it a whirl.

This movie reminded me of Vampire's Kiss (the "Nicolas Cage eats a cockroach" movie): a gutless studio tries to market a movie that doesn't exist and in the process virtually buries a lovely gem.

Thank you again for pointing me toward a film I would not have considered otherwise. Yes, I plan to see Kick-Ass, but this looks to be a far better treatment of a similar concept. Thanks for giving it a look and passing on word about what you've seen.

On that note, I want to return the favor:

We watched Ink the other night, and were utterly blown away. An urban faerie tale of dreams, obsession and redemption, it featured the kind of tight storytelling and fierce imagination that Hollywood keeps wishing for but rarely achieves.

Ink's low budget in no way detracts from the quality of the film; honestly, I think its "happened right next door" atmosphere is enhanced by that no-frills approach. The characters look like people, not actors, and everyone turns in great performances. The script is drum-tight, and the passion of the filmmakers comes through in every scene.

Trust yer Satyr on this one - Ink is a winner.

I saw the trailer for this and thought it looked really interesting. There's another recent film called Special, starring Michael Rapaport, which from the sounds of this would make a very apt double bill. In it he plays a not-too-bright comic fan who undergoes experimental drug testing and develops super powers. Or does he? It, too, is billed as a comedy and most assuredly was not.

Years ago there was a movie that used to show on local TV called Nunzio in which he played a retarded delivery boy (man) who fantasizes he's a superhero, wearing a homemade cape. Are they trying to tell us something?