GOT STUFF GOIN' ON 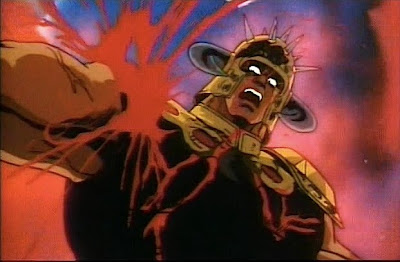 FIST OF THE NORTH STAR's Raoh: my inspirational figure during times of potential adversity.

So I've been unemployed for a month and beset with the expected financial belt-tightening (not that I was at all flush in the first place), and a portion of today was utterly wasted by me having to attend a Department of Labor-mandated job counseling session that amounted to pretty much naught, but I had to go because my absence could have jeopardized my unemployment benefits (at least that's what it said on the form letter.)

But moss does not grow upon the rock that is Yer Bunche and I have used this latest period of joblessness to enjoy being able to sleep when I feel tired, eat when I'm hungry rather than scheduling meals, and most important of all, I'm feeling totally juiced by the biggest creative upswing I've experienced in ages. I'm hard at work on the book that I've puttered with on and off for the past three years, only now I've twigged to its true focus and have a real handle on it (more on that as things come together). I've also been interviewed for an in-production documentary on comics that is meant to explain the culture to folks who know jack shit about it, plus I got interviewed for the upcoming web (possibly eventually television) series IT'S A SICKNESS, in which assorted loons sit down and speak at length on their obsessions, which in my case was all things MANDINGO and slavesploitation-related (I'll let you know when the footage hits the Internet). By all accounts my segment was a big hit with the show's creators and staff, so who knows where that could lead? And last, but definitely not least, I've assisted the organizers of ComiCONN, Connecticut's first "king-size annual" convention by and for the fans, in getting guests to attend (this humble blog is even listed among the sponsors that one can click on to see their sites, but, as stated, I'm more of a very useful booster with no money). And on top off all that I have some very interesting job nibbles going on that I will tell you about as things begin to gel a bit more, so yeah, it's kind of a full plate.

What else? There are three comics-related interviews in the pipeline for PUBLISHERS WEEKLY COMICS WEEK and I will keep you posted as to when they go up online, and I also have a growing backlog of reviews and the usual drivel you've come to expect, including an overview of Kraut madman Werner Herzog's balls-out crazy BAD LIEUTENANT-PORT OF CALL: NEW ORLEANS (2009), so get ready! I'm trying to resume a daily posting schedule and hope to achieve that within the next few days, so once more I thank you for your patience and support. It really means a lot.

Hey bunche-is there a RPG track at the con in CT? I might have some folks who'd come out and run games if so.

I think you're really really good on TV.

That's all fantastic news, Bunche! I'm really glad to hear that your media geek cred is paying off beyond godlike adoration of we Vaulties. Congratulations! I look forward to seeing... oh, pretty much all of it.