So yesterday I finished several hours of research, writing and searching the Internet for work, and after that I was fucking famished, so I hauled my ass over to Brooklyn's Fulton Mall area and its exquisite Popeye's Chicken location. Throughout the bus ride, my mouth watered at the thought of the cholesterol-laden favorite meal of Negroes across our fair nation making its way down my all-too-eager gullet, chased by a side of their signature mashed potatoes and Cajun gravy and one of the best biscuits in all of fast food-dom, and by the time I stepped off the B63 bus on Atlantic Avenue and worked my way North, I was more than ready to chow down.

When I turned the corner onto the block where Popeye's holds sway, I noticed the place did not have the usual random number of bums and other undesirables hanging out in front of it in hope of grubbing for change or patrons' leftovers as per usual. Nonetheless I made my way to the establishment's door, only to run smack dab into this: 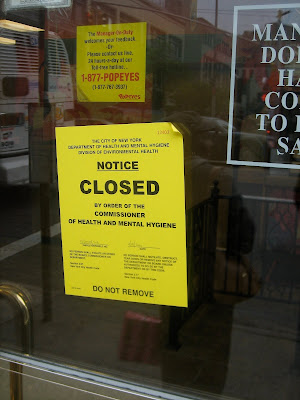 I stood there aghast as I beheld the Health Department's bold-faced notice of closure for health code violations. The shut-down must have occurred mere moments before I got there because I could clearly see the disgruntled staff seated at some of the restaurant's tables while being berated by the place's irate Pakistani manager as the usually brimming bins of chicken sat there in all of their aluminum splendor, utterly bereft of deep-fried barnyard fowl, crispy pieces of low-class culinary delight that was most likely relegated to the trash. Thus denied my longed-for fried chicken of choice, I made my way back to Park Slope and settled for some Colonel at the vastly-inferior local KFC (which provided me with a better than average meal than what that particular KFC normally dishes out).

Now, the Popeye's in question is no better or worse than the average Popeye's outlet found in any urban area, and in fact I would rate it as seeming to be cleaner than most. Having intimate knowledge of how a restaurant's kitchen can fall prey to the most piddling citation of health code violations, infractions that can have absolutely nothing whatsoever to do with cleanliness or the actually hands-on preparation and serving of comestibles, it is entirely possible that my semi-local Popeye's was closed for something as minor as the kitchen sink's hand soap being located three inches away from its allotted position. At least that's what I would like to think, but the one complaint that I had as a regular customer of the place is that is staffed by a pack of the most embarrassing and stereotypically uncouth and "ghetto" clowns imaginable, who largely ignore what the customers ask for (necessitating a check of the received order every time I've gone there), drag their asses with the service, loudly complain about how they don't give a fuck about cooking any more food for the day because they want to leave early so they can kick their baby-mama's ass (I swear I once witnessed exactly such a declaration), to say nothing of displaying a level of barely-functional stupidity that is an embarrassment to all primates that walk upright. Hopefully this closure will be temporary and instill some sense of professionalism, even on so relatively lowly a scale as that of a fried chicken purveyor, in the pack of dumbasses who run the fucking place.
Posted by Bunche (pop culture ronin) at Friday, April 23, 2010

in honor of your bitter defeat sir, i will go to my popeyes today and dine upon the ghetto goodness of which you speak most highly of!

I'm sure in a few weeks you'll be able to get more deep fried rat feces once they re-open!

LOL Funny! I remember when Popeye's first opened while I was a cop in the Bronx (maybe not the first store, but the first one there) the Popeye head on the signs was painted brown. King Features apparently lost their shit because soon all the sign heads were recolored the normal pinky flesh hue! LOL