So Friday evening rolled around and I set off to meet up with my usual crew of friends for the weekly gathering at a favorite Manhattan pub, still reeling from Thursday’s Popeye’s Chicken & Biscuits disappointment. While riding the R train out of Brooklyn, I considered that I would have around an hour to kill before most of my friends would show up at the pub, so I resolved to save some cash by eating dinner somewhere other than the comfy Irish shebeen whose overpriced food has of late become rather iffy in quality. But what to have? Suddenly I remembered: there was a Popeye’s location just a couple of blocks and one avenue away from the pub, and not only that, it was one of the best in the city, if not the best. Thus inspired, I got off the train at the 23rd Street stop and hauled ass to the temple of superior fried chicken. 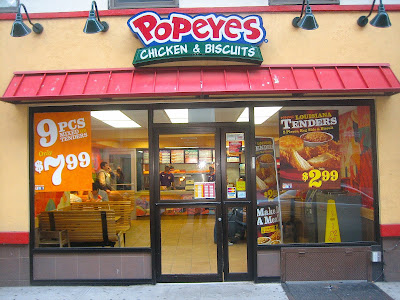 The Popeye's Chicken & Biscuits on Third Avenue between 25th and 26th Streets in the East Side of Manhattan: perhaps the best example of this fast food chain in the whole of New York City.

Unlike the previously described reject from a Tyler Perry “comedy” that was closed down by the Health Department on Thursday, the Popeye’s on Third Avenue (between 25th and 26th Streets) is not located in some crappy “ghetto” locale and the sound of bad, blaring so-called R&B and current hip-hop is thankfully nowhere to be heard. I arrived around 6PM to find the place sparsely populated with customers who were waiting quietly and politely while the kitchen cooked up more of the crunchy delicacy, and I noted that the ethnic makeup of the majority of the patrons was Asian, perhaps the only crew as god at making fried chicken as my own dusky brethren. When I placed my order, the pretty Pakistani girl behind the counter comprehended my order with no need for me to repeat it four times, and when I received my meal it was correct down to the last crumb of the chicken’s breading. In fact, it was one of the best Popeye’s chicken dinner’s I’ve ever eaten, with every item being absolutely perfect in execution and flavor, and it was all just freshly dropped into the bins (thus still scaldingly hot). 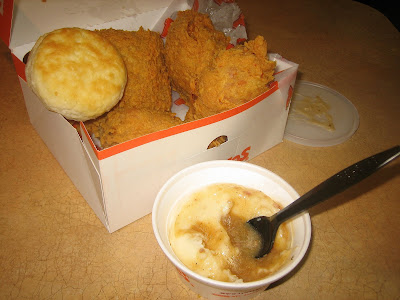 I took my time polishing off the meal, largely because the chicken would have caused third-degree burns if eaten immediately, and while I supped on the delectable mashed potatoes and Cajun gravy, the post-6PM rush descended upon the place and in no time a line stretched all the way to the door. Among the waiting patrons who’d just come in was a group of about five black youths, all around twelve years of age, and they were very well-behaved, but they had the misfortune of standing in front of one of the neighborhood’s many unstable and volatile outpatient junkies, this one being a hideous Irish-looking harridan of about sixty with a tangled and unwashed bird’s nest of white hair. I was sitting right next to where the boys and the junkie were standing and I could clearly hear all that the kids were saying amongst themselves, all of which was innocent and innocuous stuff that kids of their age chat about, but the junkie hag somehow got it into her head that this clearly rampaging pack of boogies were slanderously mocking her august personage. With no provocation whatsoever, the old bag began screaming at the startled kids, shrieking, “Who the hell are you to talk about me like that??? You’ve got a lot of fucking nerve!!! I bet you wouldn’t say that shit if your mutha was here!” The kid who seemed to be the group’s leader cut me a scared look that said to me “What the hell just happened here?” and I responded with a look that communicated “Ignore her; she’s crazy,” but the lady only continued her tirade. The kid politely said, Lady, we aren’t talking about you. How could we be? We don’t even know you!” to which the old bitch retorted, “Well, I know you,” the delivery of which was punctuated with an ominous tone. Flabbergasted, the kid dismissed her with a wave of his hand and proclaimed, “Tch! Forget you, man.” The blustery bum-ette attempted to continue making a scene, but, to his credit, the kid displayed far more maturity than she did and he and his pals ignored her as they awaited their turn to order. The whole exchange made me wonder if no matter where a Popeye’s is located, will there always be some sort of confrontation or explosion of interpersonal madness to serve as the meal’s disturbing entertainment? Who knows, and frankly, who cares? I got me some exceptional chicken that fortified me for a night out with a crew that really put away some beer and whiskey, so I was content.
Posted by Bunche (pop culture ronin) at Saturday, April 24, 2010

You were in my 'hood and didn't call...I am so hurted by this. Honestly I live a few blocks from there. Also this location was also closed for a while a few years ago but they cleaned up and some remodeling and re-opened.
Baruch College is close bu which is where all the Asian students come from

Swap out the potatoes for cole slaw and there is my version of heaven. Droooool ...