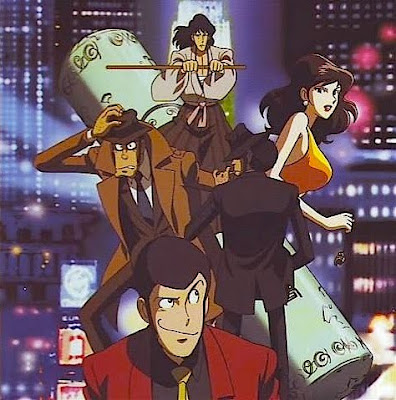 The gang is back again...for the very first time!
Even when this long-running manga/anime series trots out a potential dud, I will always give LUPIN III a chance. First appearing as a manga in 1967 and created by a cartoonist with the unlikely pen name of "Monkey Punch" (real name Kazuhiko Kato; his editor suggested he use the name briefly, but then LUPIN III hit big and he's been stuck as Monkey Punch ever since), the series follows the globe trotting adventures of Lupin the Third, the world's greatest thief, and his equally larcenous associates as they perpetually challenge themselves by plotting and pulling off the most impossible of heists (they once memorably made off with the Statue of Liberty during its refurbishment), forever doggedly pursued by the obsessed Inspector Zenigata of Interpol. The popularity of Lipin's waaaaaay over-the-top comedic adventures is such that since its inception there have been three television series, one live-action movie (the less said about that, the better), five theatrical animated features and twenty-three feature-length animated television specials, and the series shows no signs of giving up the ghost, despite the most recent television special (which aired in February of 2010) being entitled THE LAST JOB. That's pretty amazing when you consider that the entire run of LUPIN III tells more or less the same story over and over again — Lupin and his cohorts either plan an insane heist or are thrust into pulling off an insane heist, sometimes helping out innocents in need, with each adventure feature tons of derring-do — so it's up to the filmmakers to keep things fresh by crafting stories that show off the fun interactions of the five main cast members and allow their voice actors to bring these characters to life with personalities every bit as indelible as a Bugs Bunny or a Homer Simpson. But while the characters are quite familiar in the series' country of origin and abroad (to non-Japanese anime junkies, anyway), little or nothing is known about the origins of the Lupin Gang or how they all met. That lack of information is addressed in LUPIN III EPISODE 0: FIRST CONTACT, a television special from 2002, and speaking as a Lupin fan of some twenty-five years, I have to say I was not disappointed.

The film opens with a journalist convincing Jigen, Lupin's super-humanly accurate and quick-drawing gunman associate, to tell her the story of how he and Lupin's crew first met, a tale she's arranged to publish as a potential best-seller. What follows details Lupin's Manhattan-set quest to steal the Clam of Hermes, a hermetically-sealed metal tube containing a scroll that reveals the secrets of alchemy, but once he steals it from the mafiosi Jigen works for, he must also obtain the key to open the tube. When Jigen fails to gun down Lupin, he refuses to let anyone else kill the famous thief because that pleasure must be his in retribution for Lupin sullying his reputation, thus setting in motion several confrontations in which the slouch-hatted gunsel comes to grudgingly respect his devil-may-care prey. As all of that is going on, Inspector Zenigata arrives in New York in search of Lupin's female counterpart, the famously busty international cat burglar, Fujiko Mine, who also has her eyes on the Clam of Hermes and its key. Then, just when things could not possibly get more potentially convoluted, modern day samurai and master swordsman Goemon Ichikawa enters the picture, also in search of the key, which is kind of odd since Goemon is a highly skilled and honorable practitioner of the swordsman's way, so what the hell does he want the key for? Throw in the hapless New York police force, pissed-off goombahs, car chases, a cool jazz soundtrack (one of the trademarks of the series), and action out the wazoo, and you have one hell of an origin story. The only question is this: is Jigen telling the journalist the truth, or is the entire tale one gigantic load of world-class bullshit?

I have not sat through all of the LUPIN III films, but I have seen enough to differentiate the cream of the crop from the dross, and LUPIN III EPISODE 0: FIRST CONTACT acquits itself admirably. The characterizations and voice acting are dead-on — particularly fun is Zenigata getting one of his rare portrayals as something more than just a goofy idiot — and the letter-perfect New York setting is extremely well-handled, so if you're an old friend of Lupin and his pals or if you're new to the game and want to experience an entertaining primer/gateway into the whole crazy thing, you could hardly ask for a better place to return to or get started from. And once you've watched it, make sure to sit through it again with the excellent and very informative commentary track by Reed Nelson of Lupin the Third.Com. RECOMMENDED.
Posted by Bunche (pop culture ronin) at Thursday, April 22, 2010