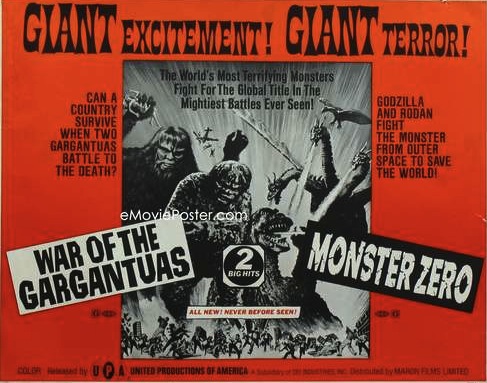 Poster from the original American release, in a double-feature with the also excellent MONSTER ZERO. Man, do I wish I could see that pairing projected onto the big screen!

Japan has unleashed a goodly number of horror films of many stripes over the years and while most are easily grasped by non-Japanese audiences, there are many that work best if one has a good working knowledge of Japanese mythology and legends and the tropes thereof. One of the things that defines Japanese monster flicks for the average Westerner is that they tend to be replete with giant monsters that were more often than not described as being ancient beings revived and juiced-up by atomic radiation, a real-life horror that the Japanese experienced firsthand. That horror found cinematic expression when personified by ogre-like monsters straight out of legend, a beast-type familiar to the native audience via stories passed down and chronicled for hundreds of years. Malevolent giants were a common element in the island nation's fantastic storytelling, so there you go, and THE WAR OF THE GARGANTUAS may be the purest and most well-realized cinematic treatment that the venerable Toho studios ever issued on the subject. It's certainly quite accessible to viewers from any culture and perhaps as a result of that accessibility it has gone on to become one of the most beloved of the entire giant monster genre. 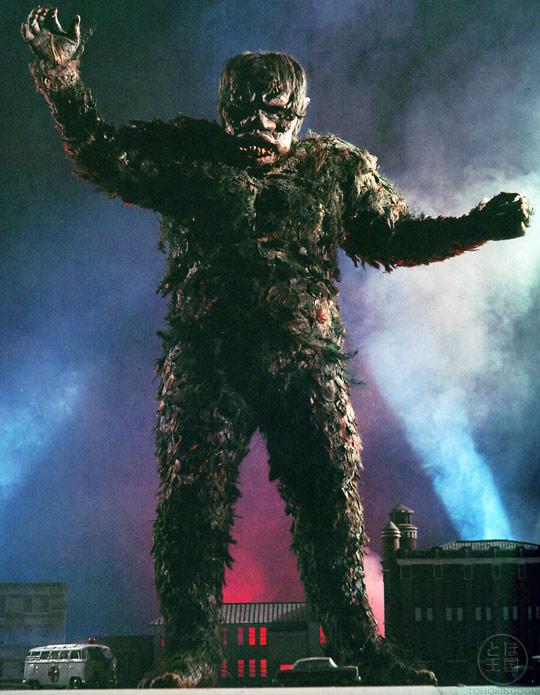 THE WAR OF THE GARGANTUAS opens with the destructive and carnivorous rampages of an ocean-dwelling, shaggy green colossus who raids human-occupied areas for food by night when not making a general dangerous annoyance of himself. Along with the aforementioned sinking of the fishing boat and devouring of its crew, this horrific creature attacks an airport — memorably upstaging a Caucasian nightclub singer's rendition of "The Words Get Stuck in My Throat" — and also hits the main city, where it devours a helpless cleaning lady and spits out her torn clothing (a scene that shocked the hell out of me when I saw it at age six), so the local authorities and military seek to find the monster and destroy it. Two local scientists (gorgeous Toho regular Kumi Mizuno and American actor Russ Tamblyn , aka Riff from WEST SIDE STORY, who appears to be very stoned throughout the film) are convinced that the monster may be the adult version of the young forest-dwelling brown "gargantua" they'd encountered and studied sometime earlier, and they want to see the creature to make sure it isn't the one they knew. Their gargantua was friendly and gentle, the polar opposite of the not-so-jolly green giant. This leads to the theory that there may be two of the gargantuas and that is indeed revealed to be the case, and testing of skin samples from the creatures reveals them to be genetically related. In other words, they are brothers, one good, one evil. Identified as Sanda (the brown one) and Gaira (the green one) in the Japanese version, the two brothers eventually come into tragic conflict and results are riveting, even to those who usually find such giant monster destruction-fests to be idiotic. 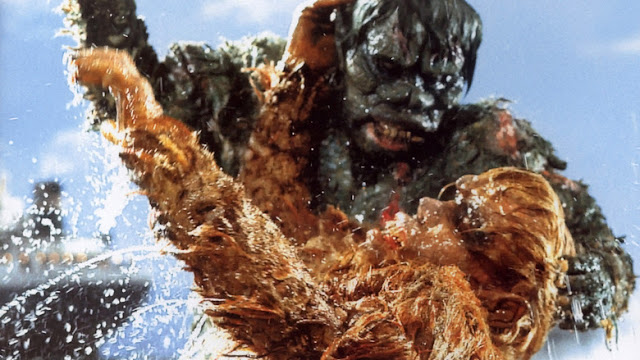 Directed by legendary Toho monster-helmer Ishiro Honda and sporting stunning effects by master innovator Eiji Tsuburaya, THE WAR OF THE GARGANTUAS is an unusual Toho entry for a number of reasons. A direct sequel to the previous year's FRANKENSTEIN CONQUERS THE WORLD, this is perhaps the only Toho giant monster epic to actually depict a monster eating people, and when it happens it's a jarring moment for an audience used to a less visceral experience from this type of thing. Also, the monsters in this film are surprisingly fleet of foot, as especially proven when Gaira vacates the airport runway when the sun rises. No lumbering city-destroyer here, boy. Also worthy of noting is that the eyes of the actors in the suits are visible, and that aids immeasurably in granting the monsters a level of expressiveness previously unseen in a giant critter confection. But the big element that sets this one apart is its emotional core, specifically that of the bond between the monster brothers and their inevitable battle. We care about these creatures, especially the sad-eyed Sanda, because we've seen this sibling dynamic before in real life, so we know and understand it.

So while THE WAR OF THE GARGANTUAS may not necessarily register with Westerners as a straight-up horror film, I advise the newbie viewer to look at it through the eyes of another culture, one with a long history of lore about ogres and such, and try to enjoy its monstrous charms from their point of view. And if that approach doesn't necessarily work for you, you can at least agree that it is definitely a straight-up giant monster movie, one of the most-balls-out examples of that genre, and certainly delivers on that front. 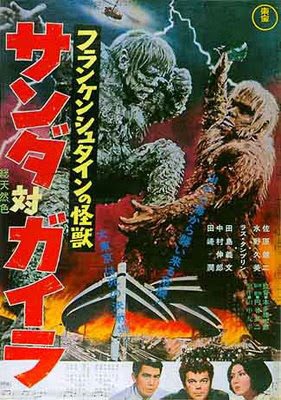 I remember watching this at age 10 or so and loving it!

Haven't thought of it in years, thanks for the post.