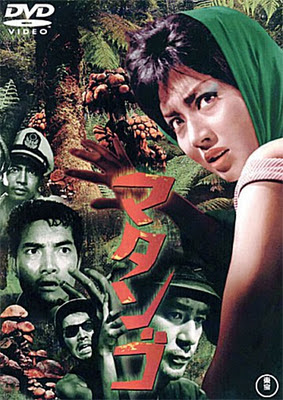 Not exactly what I would call "scary" per se, MATANGO is nonetheless definitely one of the creepiest films I have ever had the squirm-inducing pleasure of sitting through. Originally released in the U.S. under the unfortunate and somewhat-inaccurate title of ATTACK OF THE MUSHROOM PEOPLE, this was one of a handful of Toho films I'd read about but somehow missed during my formative years of absorbing and learning to adore that studio's output. (That's likely because it never played on the Tri-State area's #1 TV showcase for Toho movies during the 1970's through the early 1980's, the venerable 4:30 MOVIE.) Thankfully, it's now available uncut and subtitled on DVD and I urge you to check out this quasi-forgotten gem.

MATANGO tells the shudder-filled story, narrated by a patient in a Tokyo psychiatric ward, of a yachtful of hip young revelers — including Toho regulars Akira Kubo and Kumi Misuno — whose carefree day on the ocean becomes a fight for survival after an unexpected squall renders them lost at sea with the boat's sail and rudder torn off. After drifting for several days, they end up a remote, apparently uncharted island. As they search the island for sustenance, the castaways find fresh water but no trace of food except for strange mushrooms that cover the place like fungal barnacles. Erring on the side of caution, the skipper advises against consuming the mushrooms and the group instead attempts to survive on turtle eggs and birds in order to conserve their meager food supplies, a course of action that proves a resounding failure. Ominously, they also find a wrecked deserted ship festooned with the mushrooms and, also unfortunately for the characters, they're in a sci-fi/horror film from Toho Studios' classic period for such flicks, so they slowly realize that the island was apparently affected by atomic testing that may have been conducted from the wrecked ship, and the ubiquitous mushrooms may be the direct result of atomic mutation. It's also noted that the area's sea birds actively avoid the place...

As the group slowly finds itself on edge due to the hopelessness of rescue and the encroaching pangs of hunger as their food runs out, in-fighting begins and some of the group turn to eating the untested mushrooms out of sheer desperation. It soon becomes apparent that the mushrooms are addictive and have a euphoric psychedelic effect, and as that is discovered the fate of the wrecked ship's crew is revealed when our protagonists encounter a hideously misshapen fusion of man and mushroom. 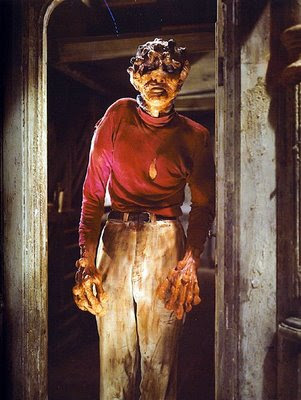 You guessed it: those who consume the mushrooms themselves end up as creepily-giggling, human-sized fungus monsters, eventually losing all traces of their former status as representatives of homo sapiens. For example: 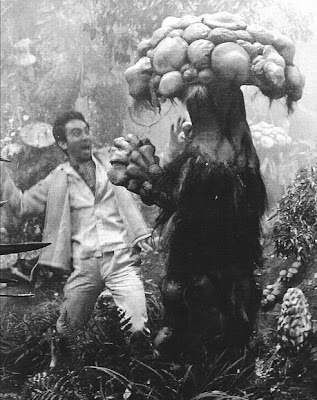 Eventually, one of the castaways is rescued but what baleful effect has the experience had upon him? Let's just say that he likely would have been better off if he'd remained on the island...

Definitely low-key and all about atmosphere rather than straight-up "BOO!" scares — I swear you can practically smell and feel the thick, mustiness of the fungus — this is perhaps Toho's most unique effort from that golden period and it deserves more exposure here in the West. Seriously, check it out. 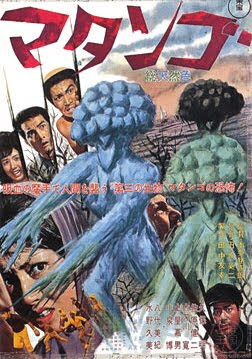 This is one of those films from my youth to early teen years that really left an impression on me. I was lucky enough to catch it in the late 1970's early 1980's on the afternoon movies (although it would have rocked to have seen it for the first time late at night on Sammy Terry) at my grandparent's house in West Newton, Indiana. I'd tell people about it an almost always they had no ideal what the frell I was talking about. I think some of my friends wondered what kind of mushrooms I'd been eating when I described it. Nevertheless,I'm very glad this made your list and second your recommendation.