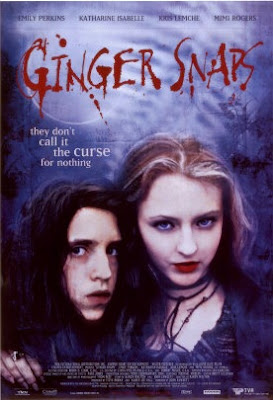 Excellent in just about every way, GINGER SNAPS is one of the few werewolf movies to look at matters lycanthropic from a female point of view and also, significantly, link that aspect to matters menstrual. It's not the first time that's been done in horror — Peter S. Beagle's "Lila the Werewolf" and Alan Moore's "The Curse" immediately spring to mind — but the handling of it here involves the universal horror o adolescence writ large and the result is glorious.

This Canadian entry is proof of what can be done with a low budget and a hell of a lot of talent and intelligence. Drawing once more upon the lycanthropy/horrors of puberty theme, GINGER SNAPS deals with two uber-morbid and very close high school-age sisters, a pair of creepy misfits who, like good old Carrie White, have yet to have their first periods. The older of the two, Ginger (Katharine Isabelle), finally starts her menstrual cycle but has the misfortune of that event coinciding with local animal attacks that turn out to be the work of a particularly savage werewolf. The monster catches her newly bloody scent and, in a scene intended to look and feel like a rape (according to the film’s co-scriptwriter), mauls the living shit out of her. 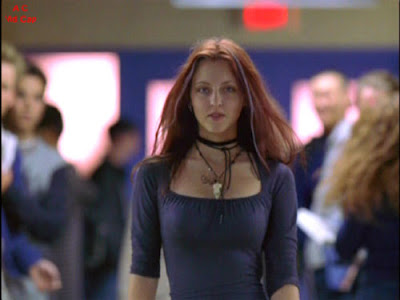 The newly wolfy and hyper-sexualized Ginger (Katharine Isabelle): on the prowl or some meat...

Ginger survives and in no time flat begins to exhibit a hitherto unseen level of aggression, both socially and sexually — NOTE: keep in mind that lycanthropy is a communicable disease — to say nothing of such undeniable signs of wolfing out as getting furry in odd places, her teeth becoming more suited to tearing flesh, and the tail that she’s sprouted from out of nowhere, all of which happens when the moon isn't even full, so you know it's really bad. Ginger's younger sister, Brigitte (Emily Perkins), realizes what’s happening and sets out to cure her sister, and if that doesn’t work, it'll be time for a more permanent solution… 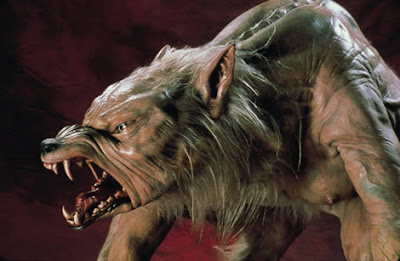 Sorry, but there are some things Pamprin just ain't made to handle.
One of the rare werewolf movies from a female perspective, GINGER SNAPS is highly recommended for its genuine scares, well-handled lycanthropy/puberty metaphor, and its wicked DeGRASSI HIGH MEETS THE HOWLING sensibility. And the first sequel’s actually pretty good! If you choose only one film from this countdown, this is one of the handful you should seriously consider. (I also strongly favor NIGHT OF THE DEMON and DAGON.)
Posted by Bunche (pop culture ronin) at Sunday, October 23, 2011