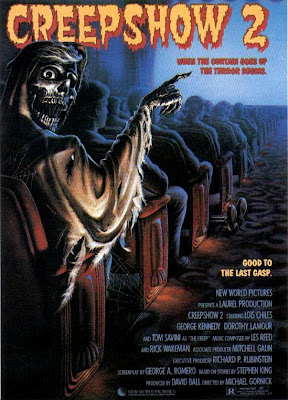 Coming some five years after the original CREEPSHOW, this followup has actually improved with age (in my opinion, anyway), especially when stacked up against its predecessor. Repeating the framing motif that the stories we're presented are all yarns found in an issue of the fictional CREEPSHOW comic book, only this time around the proceedings move at a much livelier pace and the stories are not over-long. Once more penned by human horror factory Stephen King, this trio of short stories are less about character study than they are about offering up scary/cheesy stuff that's fun for all ages — swearing, minor gore and brief nudity notwithstanding; if I had kids of age eight or older I would let them watch it — and the lineup includes: 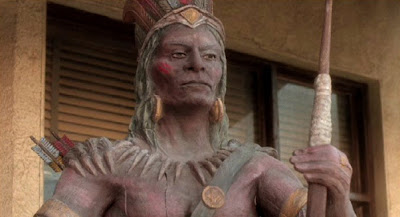 The second you lay eyes on the wooden Indian in front a remote southwestern general store, you know exactly where this is going. A kind old man and his wife (George Kennedy and Dorothy Lamour) are among the last holdouts in their dying town and their store has had nary a customer in ages. Sympathetic to the local Native American tribe, the old man allows them to take goods on credit (which does not sit well with his wife), and ends up with the tribe's sacred treasure entrusted to him for safe keeping until they can pay him what is owed. Unfortunately for him, the tribal elder's vain and sociopathic nephew shows up with some white friends to steal whatever they can from the couple and the store in order to fund their trip out of the dying town to Hollywood, where the long-maned nephew is convinced his man-beauty in general and his hair in particular will instantly make him a star. During the course of the robbery, the psycho nephew kills the couple with shotgun blasts when the old man refuses to hand over the tribal treasure. As the disrespectful, murderous youths drive away to make final preparations for their exodus, the wooden Indian who had adorned the shop's porch for ages comes to life to hunt down and administer retribution to the thieves and to avenge the old man who had so diligently maintained his paint job over the years. And what sweet vengeance it is... 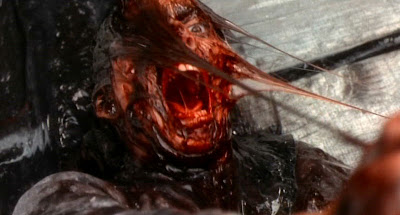 Considered by many to be the film's best segment, this strands us with four stoned teens on a raft in the middle of a lake, a raft that's surrounded by an unexplained and very hungry creature that looks like an ultra-sticky melding of an oil slick and a mobile swimming pool cover. It displays properties similar to those of the Blob, namely that its amorphous and envelops its prey to ingest them via corrosively dissolving their flesh, and it is very, very hard to escape... This segment also includes what has to be the screen's most ill-chosen moment in which to cop a cheap feel, and a repeatedly-played example of the sort of lame generic fake '80's stoner rock that infested horror movies of its era, a trope that never fails to crack me up. 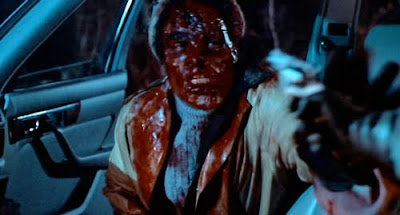 "Thanks for the ride, lady!"
Lois Chiles — best remembered by moviegoers as Holly Goodhead in MOONRAKER (1979) — stars as an adulterous businesswoman who leaves late from her latest assignation with her arrogant gigolo of choice and must drive like a maniac to make it home by a prescribed hour, so her husband won't suspect what she's been up to. But while driving too fast down a dark road, she accidentally hits and kills a vagrant (Tom Wright) and immediately flees the scene lest she get hauled in by the cops or miss getting home in time so as not to arouse suspicion. As anyone who's ever seen an episode of THE TWILIGHT ZONE can tell you, that was a bad move because she ends up repeatedly encountering the gory undead corpse of the hitchhiker, sometimes fending him off from atop or inside her of her car or savagely running him over again (and again and again), all while he continuously exclaims "Thanks for the ride, lady!" It starts out seriously but soon reveals itself to be a rather absurd and funny exercise in very dark humor.

By no means perfect, I still say CREEPSHOW 2 works better at what it set out to do than CREEPSHOW did, and the fact that the scares this time around are a lot tattier only bolsters its charm. If you were disappointed in it when it came out, it's time to give CREEPSHOW 2 a second chance.
Posted by Bunche (pop culture ronin) at Sunday, October 09, 2011