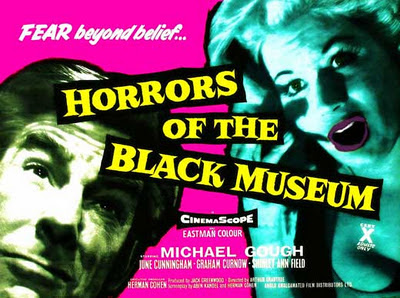 In the late 1950's, the horror films generated by Hammer Studios upped the level of violence/gore and sex/gratuitous female flesh by degrees that only increased with each passing years, especially as the Fifties gave way to the Sixties, and with that popular acceptance and box office success came films that took advantage of that new leniency. The most infamous from that early wave of British responses to the trend is this nasty little shocker that possesses several moments that everyone who's seen it has permanently burned into their memories, especially if they encountered HORRORS OF THE BLACK MUSEUM during their impressionable childhoods. That's when I first saw it — I was around eight years old — and look at what happened to me...

The horror begins in London when a pretty young woman receives a package containing a pair of binoculars. Intrigued, she puts the binoculars to her eyes, which are suddenly penetrated by pressure-sensitive spring-loaded six-inch spikes, causing her agonized death.

One of the most shocking moments of 1950's horror cinema (or any other era, for that matter).

As the detectives of Scotland Yard begin to investigate this crime, the third horrific murder in two weeks, creepy, sensationalistic true crime author Edmond Bancroft (Michael Gough , aka Alfred in four of the Batman films) arrives to pump them for information, an enthusiastic gleam in his shifty eyes. Quite familiar to the police due to his constant sniffing about for gruesome case details to use in his books and magazine articles, Bancroft lives and breathes crime and to all observers, he is unhealthily obsessed with crime in general and with the current murders in particular, resulting in his health being endangered from his alarmingly high blood pressure. Needless to say, Bancroft's obsession is so intense because he's the vicious maniac the police are searching for but he's beyond suspicion due to his ubiquity at the station and also thanks to his pronounced limp. But despite his frail physicality, Bancroft is one sick, sick motherfucker who orchestrates the murders so he'll have new material to write about, and also keeps a "black museum" in the basement of his house, a sanctum decorated with classic instruments of torture and accented with life-size manikins demonstrating what happens to those who endure the wielding of such contraptions in the hands of sadistic torturers. Bancroft also employs a young assistant named Rick (Graham Curnow), to whom he administers mind-controlling drugs that turn the lad into a programmable killer that Bancroft dispatches to commit a series of ever-escalating slayings. (When under Bancroft's murderous influence, Rick's complexion turns green and wrinkly for no apparent reason.)

But Bancroft's dark path is not without its obstacles. He pays rent for and gives cash to his sleazy, gold-digging blonde bombshell girlfriend, Joan (the lusciously curvaceous June Cunningham), but she's tired of being a kept woman in an isolated flat who's never taken anywhere and only used as a sex toy (strongly implied but not explicitly stated). Joan also viciously insults him as being "less than a man" (we know what that means) and makes fun of him being a "cripple," but the real problem lies in her knowledge of the dark deeds Bancroft gloats about while drunk and her intention to leave him, possibly to spill what she knows, all of which only adds fuel to the fire of Bancroft's oft-stated hatred and distrust of women. (He may be a misogynistic pig but at least he's up front about it.) Bancroft also buys the signature weapons used in the killing spree from an aged antique dealer who's smarter than she initially lets on, and once she realizes that the goods she sold to Bancroft are the same ones used in the murders, she seeks to cushion her retirement with cash extorted from her customer. (She doesn't go to Scotland Yard to rat Bancroft out because she fears guilt by association for selling the items to him.) Bancroft's personal physician is also no slouch in the reasoning department and after a recent examination of his patient, he begins to suspect the writer of being involved in activities that are considerably less than savory. Then there's Rick's burgeoning romance with a pretty young thing that threatens to upset his boss' control over him and possibly expose Bancroft's twisted activities. With all of that mishegoss threatening to boil over, it's only a matter of time until it all ends very, very badly.

Marvelously and unashamedly lurid, HORRORS OF THE BLACK MUSEUM is like the cinematic cousin to the gory horror and crime comics that led to U.S. Senate sub-committee hearings in the early 1950's, only much better written than those often hacked-out efforts (pun most definitely intended), so check it out if you've never seen it. I promise you won't be disappointed, and how could you not be hooked after that hideous opening scene?
Posted by Bunche (pop culture ronin) at Tuesday, October 25, 2011