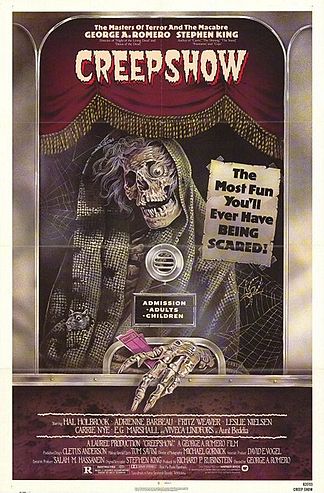 When CREEPSHOW was first announced, it seemed like a horror fan’s dream come true. It united legendary director George A. Romero — the genius behind the original versions of NIGHT OF THE LIVING DEAD and DAWN OF THE DEAD, among other films of note — screenwriter Stephen King (if you have no idea who he is, did you just fly in from Iskandar or something?) and popular gore makeup artist Tom Savini (who did the shocking gore work for the original DAWN OF THE DEAD and then shot the slasher genre into cultural prominence with his groundbreaking effects in the first FRIDAY THE 13th, MANIAC, THE BURNING, and many others), and the film’s format was to be an anthology of five short stories, like a cinematic analog to an old E.C. horror comic (the kind that served to inspire King during his childhood). All of the highschoolers in my hometown who were horror addicts made sure to be there on opening night and what we got was a very mixed bag that has somehow come to be considered something of a classic, and for the life of me I cannot figure out why.

The film’s framing device involves a look into the household of a little boy whose asshole Alpha male dad reacts to his son’s interest in comics with the foaming-at-the-mouth rage one would expect if he’d caught the lad buggering the freshly butchered corpse of the neighbor’s daughter. The father rails against his son’s latest comic book acquisition, a copy of the titular CREEPSHOW , and throws it into the trash in spite of his son’s anguished protests. Once relegated to the trash, an eerie wind causes the pages of the comic to turn and the audience is shown five short stories of varying degrees of terror and/or interest: 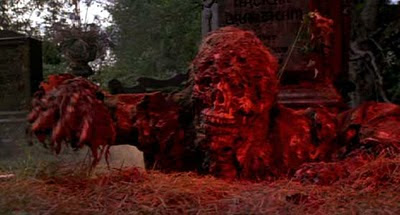 It’s a gathering of various relatives of a rich old bastard who was awful to his descendants while he was alive, and now, seven years after his death— murdered by his long-suffering daughter — they all congregate at their yearly Father's Day dinner. What they don’t expect is the rotten old fuck clawing his way from the grave as a moldering and malevolent zombie who wants his “goddamned cake.” If you’ve ever read any given vintage issue of TALES FROM THE CRYPT, THE VAULT OF HORROR, or THE HAUNT OF FEAR, you already know where this one goes. 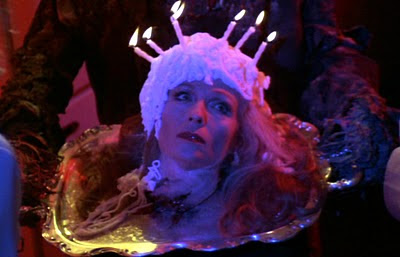 An ending like something straight out of TALES FROM THE CRYPT.

This segment could have benefited from a much tighter edit because it’s simply too long for a yarn this slight that only exists to get to its none-too-surprising or scary visual punchline.

“The Lonesome Death of Jordy Verrill” 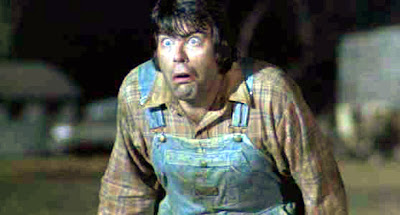 This segment is widely hailed as the weakest in the film and that’s not an unfair assessment, but it’s a damned shame because the core premise had potential.Dumbass hayseed Jordy Verrill (played by Stephen King to painfully broad and screechingly unfunny effect) finds a crashed meteor in his yard and makes the mistake of touching it. In no time, Jordy is covered with aggressively proliferating weeds of extra-terrestrial origin, and all they want to do is absorb moisture and continue growing.

Jordy ends up looking like the trailer park answer to Swamp Thing and finally blows his own head off with a shotgun, but the weeds have grown all over the place, utterly infesting his house, fully taking over his yard and begging to spread beyond and down the road, and the TV weather report announces that the area is due for a massive rain storm… King’s performance is sub-HEE-HAW!-level and is painful to endure, a situation not at all aided by the segment’s unnecessary over-length.

“Something to Tide You Over” 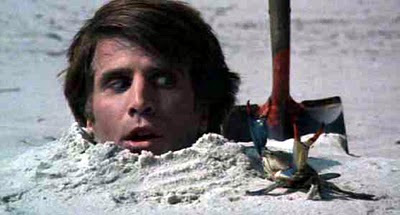 A not bad infidelity revenge yarn starring Leslie Nielsen and Ted Danson (long before I knew who he was) that features a nasty bit of slow-death torture by burial up to the neck in the approaching high tide, a demise that leads to its victims returning as zombies to take out their tormentor. 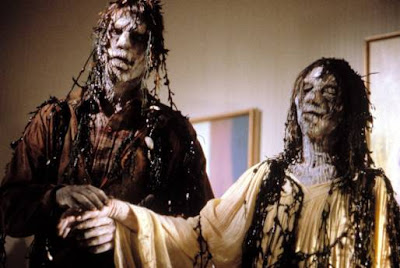 If only Sam Malone could have been a zombie for a few seasons on CHEERS... 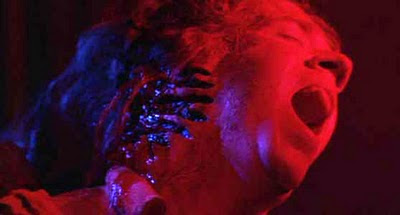 The only genuinely scary segment, this has to do with a college professor (Hal Holbrook) who’s had it with his marriage to his embarrassingly boozy, sleazy harridan of a wife, Billie (Adrienne Barbeau), and the out that fate offers him when he discovers a crate beneath a forgotten stairwell in the basement of one of the college’s wings. The crate has been there and padlocked since around 1865, and it contains a vicious, ravenous monster with more razor-sharp teeth in its head than a Great White shark. After it savagely eats a couple of people, the professor sees the unexplained beast as the perfect way to dispose of his wife once and for all, so he sets in motion a plan to lure her into the creature’s grasp…Looking at this segment some thirty years on, I was struck by how the wife was indeed boozy, henpecking and annoying, but her behavior and words showed that she did love her husband in her own way (her booze-fueled outburst about his failure in the bedroom notwithstanding). I guess a film of this E.C. Comics-style nature did not have tome to examine the complexities of such a relationship, but I now find the story’s treatment of Billie to be rather too simplistic and unfair. What she really needed was a good twelve-step program and some therapy, not to end up down the gullet of some toothy, insatiable Muppet.

“Theyr’e Creeping Up on You” 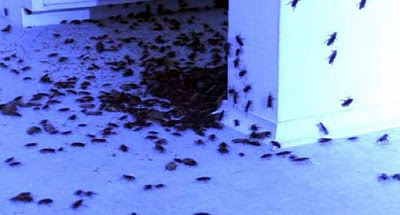 In which a rich neat-freak asshole (E.G. Marshall) discovers the hard way that his hermetically sealed and supposedly roach-proof home is anything but. Simply put, if you have any sort of roach-related phobias, avoid this segment like the plague. It’s not scary, per se, but its under-the-skin willies factor is perhaps unbeaten in cinema history.

So what CREEPSHOW ends up being is a conglomeration of a goodly amount of talent that came up with an overlong (at two hours) R-rated bigscreen spook-out that’s not as good as anything found on the HBO television series of TALES FROM THE CRYPT. I was very disappointed by this film when it came out and just after seeing it again for the first time in about twenty-five years, its waste of potential only serves to sadden me. Your kids might enjoy it — provided you have no problem with them sitting through the film’s R-rated language and gory stuff, which really isn’t all that bad — and, if truth be told, I like the cheaper, shorter CREEPSHOW 2 a hell of a lot better. I saw let this stale chestnut remain an historical genre footnote and move on. I certainly won’t be returning to it.
Posted by Bunche (pop culture ronin) at Tuesday, October 04, 2011