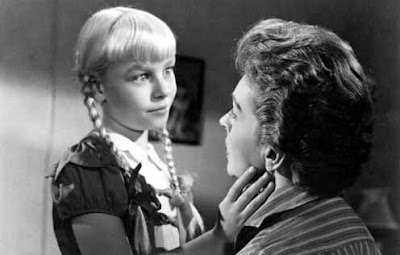 
While horror movie buffs usually have a certain flavor in the genre that really turns them on — vampires, werewolves, ghost stories, witchcraft/devil junk, the undead — some of them also have a certain flavor within the genre that they avoid like the plague because it genuinely scares and touches them on a primal level. One flavor that greatly disturbs some folks is the one involving evil kids, and the roots of that particular flavor can be traced straight back to the advent of THE BAD SEED.

Originally a 1954 novel by William March and subsequently adapted into a hit Broadway play less than a year after the book's publication, from there a motion picture version was inevitable and it made its debut in 1956, wisely retaining the child actress who starred in the Broadway version, Patty McCormack, who was ten years old at the time. McCormack garnered raves for her stage performance and her screen turn in the same role earned her an Academy Award nomination for Best Supporting Actress, as well as a Golden Globe nod. McCormack's performance as the child-murderess Rhoda Penmark has since justly gone on to be carved in stone as perhaps the archetypal performance by a kid a kid playing the very embodiment of all-too-human evil, so much so that McCormack's subsequent acting career was strongly overshadowed by THE BAD SEED for decades.

WARNING: HERE THERE BE MINOR SPOILERS. 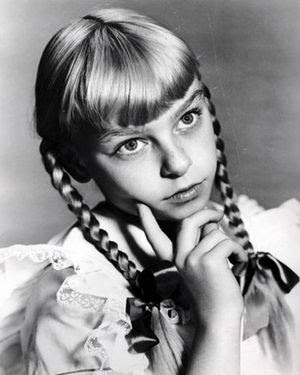 The film version of the BAD SEED purportedly hews closely to the stage version — with some minor-yet-significant alterations, but more on that later — and relates the escalating series of events set in motion once eight-year-old Rhoda Penmark's father leaves home for his latest tour of military service. Rhoda's mother, Christine (Nancy Kelly), discusses Rhoda's recent loss of a penmanship award to a schoolmate with her landlady, and how burningly irate her daughter was in regard to the loss, but at the moment Rhoda appears to be the very picture of a sweet and innocent little girl, pigtails and all. Things take a turn for the dark when Rhoda's triumphant penmanship rival mysteriously drowns at a lakeside class picnic and Christine worries that the boy's death may have traumatized her daughter, but when she returns home Rhoda is in no way affected and is her usual treacly self (she's like a nauseating parody of a character fusion of Shirley Temple and Deanna Durbin). After visits from Rhoda's teacher and the dead boy's distraught and very drunk mother (who makes veiled accusations of Rhoda's guilt in her son's death), it is revealed that Rhoda was the last person to see the dead boy alive and that she was also seen clawing at the boy's penmanship medal (who the hell carries their school medals around with them?). With the germ of suspicion in her head, Christine finds the penmanship medal in Rhoda's possession and from there the story spirals into a deep well of horror that places Christine firmly within the grip of one of parenthood's most unspeakable nightmares while the audience learns that behind Rhoda's sweet face lies a very dangerous and stone-cold killer. And her classmate was not Rhoda's first victim...

The remainder of the narrative is fraught with a number of fascinating and awful reveals, not the least of which is Christine's discovery of her own long-buried origins, and there's also Rhoda's running psychological jousting with creepy/sleazy white trash janitor LeRoy (Henry Jones), who inappropriately teases Rhoda about having murdered her classmate and quickly realizes that his questionable joke is in truth a declaration of fact, and now Rhoda knows that he's a potential threat... Let's just say that LeRoy's is one of the most shocking and agonizing demises in '50's cinema and it still retains the power to shock some fifty-plus years later.

The film version of THE BAD SEED did not, however, reach the screen without some sanitizing mandated by the oppressive Hays Code and its strict rules of censorship that kept Hollywood movie content "safe" from the mid-1930's through the 1960's. Both the novel and play ended with Christine, after finding the events of the story to be too much to deal with, slipping Rhoda a dose of sleeping pills and then fatally shooting herself in the head, but Rhoda ends up surviving. As dictated by the Hays Code, Rhoda could not survive, possibly to kill again, since that could be interpreted (incorrectly) as sending the message that "crime does pay." The movie version solves this in a ludicrous fashion that I won't spoil here because it's simply so fucking stupid that you have to see it for yourself, just so you can roll your eyes and groan when it happens. And, compounding the imposed idiocy even further, there's a post-finale "curtain call" in which Christine is shown administering a spanking to Rhoda, a staggeringly bad decision that almost single-handedly scuttles the film's ultra-dark tone (which was perhaps the intent). 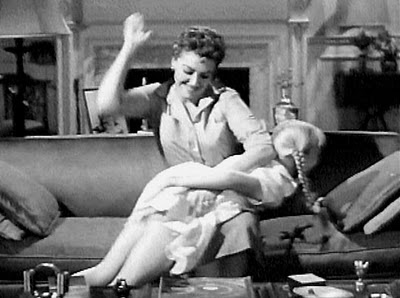 How do you simultaneously ruin a great movie and utterly insult your audience's intelligence? Behold the answer.

Yet, somehow, the power of THE BAD SEED remains despite the Hays Code's asshattery and the film is often remembered with a chilled, far-away look by those who saw it during its original run. The mere mention of this film stops my seventy-eight-year-old mother in her tracks and her eyes narrow as she slowly hisses the words "The Bad Seed..." through clenched teeth. I found that out when I first heard of this movie and its impact when I was around fourteen, and when I asked my mom if she'd heard of it and I got that reaction, it was pretty much guaranteed that I would search it out and eventually see it. The funny thing, though, is that I first saw THE BAD SEED in its memorably cheesy made-for-TV version from 1985, which featured David Carradine as LeRoy in what may be his most over-the-top performance, and that's really saying something. That remake featured the original un-sanitized ending, so I kept that in my head when I finally saw the original a few years later.

THE BAD SEED comes highly recommended (ludicrous studio jiggery-poker notwithstanding) and it's even suitable to show toy your twelve-and-ups. Just be make sure that they don't take it as an inspirational piece... 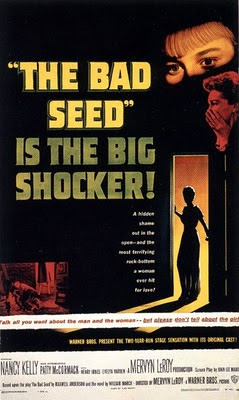 ok, so time for a remake of the film...this time i want to see leroy flaming, christine decapitated, and landlady precipitated off the roof, as promised...