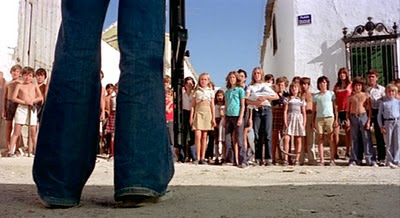 You know you're in for a rough ride when a film opens with over seven minutes of real-life footage of the effects of war upon children, showcasing among other examples the less than kid-friendly events at Auschwitz.

WHO CAN KILL A CHILD? boasts the simplest of TWILIGHT ZONE-ish setups: A married British couple take one last vacation before the woman gives birth to what will be their third little one (she looks to be nearing her third trimester) and end up on Almanzora, a remote island off the coast of Spain. Upon arrival, the couple notice plenty of local children but not one adult in immediate sight, so where have all the grownups gone? The children they encounter become increasingly creepy and bizarre, either scowling sternly or giggling like they're on nitrous oxide, and it soon becomes apparent that the kids are homicidal little fucks, a conclusion reached when the husband witnesses a young girl beating an old man to death with his cane, after which he finds a group of kids merrily employing the poor old codger's body as a gruesome piñata. (Yeah, good luck beating candy out of that.) 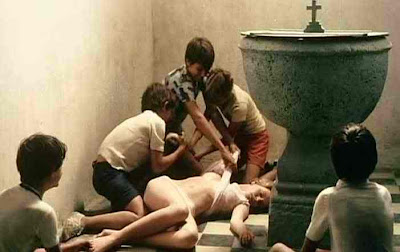 Trust me, you really don't want to think about this...
The couple eventually finds a sole injured grownup survivor who informs them that two nights before their arrival, all of the island's children awoke and began laughing as if they all shared some private joke, and then moved from house-to-house, savagely murdering every adult and using clubs and knives to do the job. But the adults did nothing to stop them because, as the title so pointedly asks, who can kill a child? 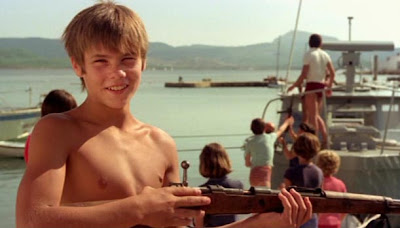 Oh, HELL no.
Sorry for the brevity of this review, but from there things get incredibly fucking dire and it would be unkind of me to spoil things any further. Let it suffice to say that this story ends on a believable bleak note and leaves things wide open, but little explanation is given as to the "why" of what spurred the savage awakening of the kids. Kinda like Hitchcock's THE BIRDS (1963), only with kids. (There are hints that there's some malevolent disembodied presence at work, but it is never explained. I choose to think it's something along the lines of John Wyndham's THE MIDWICH COCKOOS, aka VILLAGE OF THE DAMNED, only minus the fuckless pregnancies...) What I will say up front is that, much like the superb DAGON (2001) — which I will finally be covering as part of this month-long project, so you'll get the details when the review posts — WHO CAN KILL A CHILD? milks its remote off-coastal Spanish location to great effect, and once on Almanzora the audience finds itself just as stranded and helpless as the film's protagonists. A truly great work of involving the audience in what's going on onscreen.

The bottom line here is that this is a film that could never be made now, especially not in the United States, and for that reason alone it is a must-see for horror fans. There are certainly better films, but this one is unique and should not be missed. 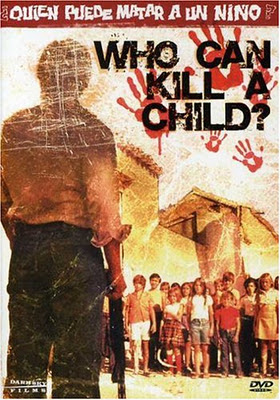 I just wanted to congratulate you for your blog, its regular updating and nice writting, as well as discovering for the world forgotten gems like that movie. The funny thing is that the first time I saw it (not as easy as one may think despite being in Spain)I found the path too slow, and the very credits beginning was way too long for me. But then the ominous atmosphere increased gradually and it was just rewarding.

Thank you so much for promoting non-anglosaxon movies too. I dare to suggest you two more spanish pieces from that time: La residencia (The House that Screamed, according to IMdB), from the same director, and La Cabina (The Phone Box), a 35 min. story way better than many movies.

You will enjoy them: dictatorship is a nice enviroment to imagine metaphoric horror stories...