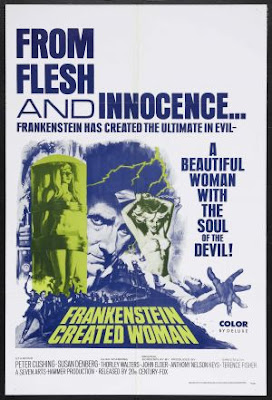 I first saw this fourth of Hammer Studios’ Frankenstein series when I was just shy of twelve years old, when it played late-night on NYC’s Channel 5, and I was not quite prepared for what I got. At point in my development as a “horror kid,” I’d been raised on a steady diet of the Universal classics and any number of cheesy fright flicks that played on the area’s several local TV movie showcases, and while I had heard of Hammer and how its films breathed new and lurid life into Britain’s (and the world’s) horror film genre, I had yet to see any of them. The films had already become legendary for their then-groundbreaking levels of gore and flesh, so many of the films in Hammer’s filmography could not really be shown on regular broadcast TV uncut, so I’m guessing the local stations opted not to bother. But when I saw FRANKENSTEIN CREATED WOMAN during that late-night airing, it appeared to be either completely or mostly unedited, and its level if both visceral and adult content completely rewrote how I looked at horror films from then on, now being able to find the nastier stuff in earlier horror films that was implicit, and also having my adolescent perceptions opened to embrace the explicit.

FRANKENSTEIN CREATED WOMAN opens some years before the main narrative begins, showing us the execution by guillotine of a madman, the father of Hans, a local peasant in one of those uniquely Hammeresque European villages, probably in Bavaria or someplace. The story then skips forward to find Hans, now a young adult (Robert Morris), in the employ of Baron Victor Frankenstein (Peter Cushing, in his ongoing turn as the amoral mad scientist), who has shifted his experimental focus from composing man-made life out the sundry parts of the recent dead to restoring life to corpses via a weird “soul transference” process. 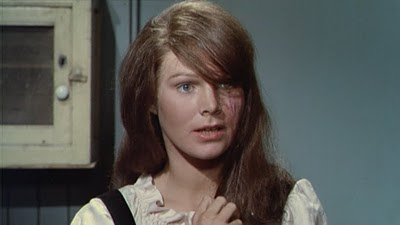 Susan Denberg as the disfigured and disabled Christina: sweet innocence soon to be destroyed.
In his off-time, Hans is the lover to Christina (lovely Austrian actress and Playboy Playmate Susan Denberg), a sweet serving girl at a local tavern whose entire left side is scarred and stiff with near-paralysis (how she got that way is not explained). Unfortunately for her, Christina is the frequent target of a trio of rich young assholes who love nothing more than to drop by her place of employ and torment her, cruelly laughing while jeering at her disfigurement and physically infirmity and forcing her to serve their food and drink in hope that she’ll spill everything, thus inviting more abuse from them. (If you have any kind of human compassion, this sequence is very hard to watch.) And on top of all that, the bastards never pay and get away with it because they are a part of the town’s ruling class. Their leader is the smug dandy Anton (Peter Blythe, in a memorably venomous performance), an incredibly vile villain whose crimes are made all the worse by virtue of him clearly being nothing more than an entitled, affluent pussy who’d get his ass kicked all the time if not for the immunity granted by his father’s position in the community (well, that and the innkeeper’s fear over Anton’s threats to have his father revoke the innkeeper’s license if he complains to the authorities. Oh, and the innkeeper is Christina’s dad.) His friends are no better, and the three of them end up on the receiving end of an irate Hans when he happens by Christina’s inn on an errand for the Baron and witnesses her abuse. Hans takes the fight to the foppish thugs and even slashes Anton across the face with a knife before being led away by the constables, but he manages to get away.

Later that night, the boozed-up thugs return and coarsely serenade Christina outside of her bedroom window with a vicious and derisive song declaring her to likely die a virgin who will be “the ugliest angel of them all” when she arrives in heaven. It’s squirm-inducingly cruel and made all the worse by the fact that Christina is not a virgin at all and has Hans right there in her bed, who is furious at Anton and his boys’ taunts but Christina begs him to restrain himself and just let it go. The thugs then move on and break into the inn to steal more liquor, but they are discovered by Christina’s innkeeper father, whom they savagely murder by beating him to death with their canes. Remembering the thugs’ earlier altercation with Hans and the temper he displayed, the police pin the murder on the innocent Hans and he’s given a swift trial before being whisked away for execution by guillotine, just like his father. Christina, meanwhile, is conveniently elsewhere so she can’t tell the police that Hans was with her at the time of her father’s murder, and Hans is such a gentleman that he’d rather die than establish his alibi at the cost of possibly staining his lover’s honor. As the blade descends and lops off poor Hans’ head, Christina happens by at that exact moment, witnesses her lover’s horrible death, and promptly throws herself off a nearby bridge and drowns in the river that flows beneath it. At that point, Baron Frankenstein retrieves Christina’s body and Hans’ severed head, and hightails it back to his lab…

After performing some miraculous plastic surgery and correcting Christina’s disabilities, as well as transferring Hans’ soul into the poor girl’s corpse, Frankenstein re-animates Christina as a stunning blonde beauty (also played by Susan Denberg) with no memory of her previous life, whom he has hopes of grooming into the perfect proof of his discoveries made flesh. But while the new Christina is sweet much of the time, in her time away from Frankenstein she is driven by the vengeful spirit if Hans, going so far as to keep his severed head on her bedpost, and under his influence she becomes a seductive and savage engine of revenge, luring and killing Anton and his gang one by one… 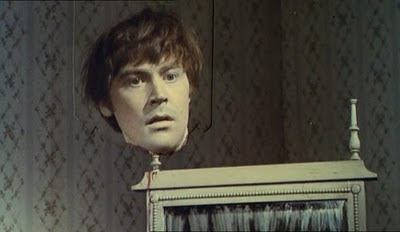 The most gruesome of motivational keepsakes.
I love most of the Hammer Frankenstein series but this one is my very favorite, perhaps largely because its grownup content hit me at just the right stage in my development as both a horror fan and as a person. It also appeals to me because there are few stories I enjoy more than those about kind and decent people who are tormented and wronged by truly horrible villains to the point when exacting terrible retribution is the only thing that will put things right. (Or if not exactly put things right, at least the scales of cosmic justice will be balanced.) FRANKENSTEIN CREATED WOMAN is a great revenge yarn and everything about it fires on all cylinders. 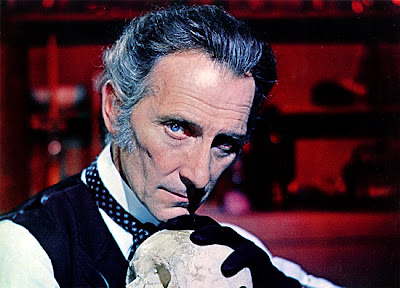 Peter Cushing, indelible as Baron Frankenstein.
Peter Cushing’s aristocratic, amoral asshole of a Baron Frankenstein is in fine form here and even though he kind of takes a backseat to the Hans and Christina plotline, his presence is vital to its outcome. The tragic love story is gripping, the bad guys are the absolute scum of the earth, and their comeuppance is quite nasty. Seeing Christina/Han’s spree of revenge was really something to my way of thinking at the time, particularly when she lures one of the thugs to a picnic — remember that she now looks quite different from her scarred and lame previous self — gets his head into her inviting lap, and promptly (and bloodily) buries the bread knife in his neck. 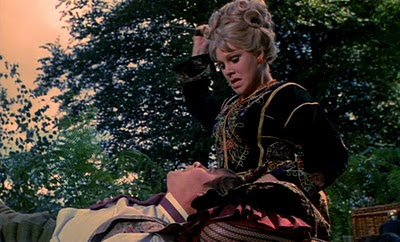 Note the intensity on Denberg's face. That's hatred that you can feel!
That bit in particular shocked me, both for its cold brutality and because it was the first time I’d ever seen a beautiful woman as a killer/monster. 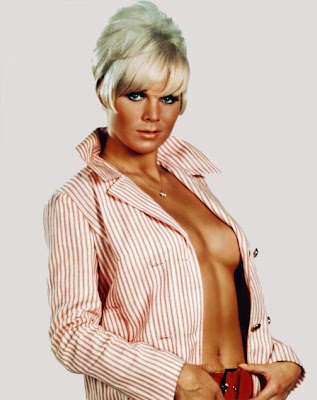 Susan Denberg, ca. 1966, as seen when not killing deserving assholes.
And what a woman! Susan Denberg was a gorgeous Austrian model/actress who was Playboy’s Miss August for 1966 and was also one of the titular “Mudd’s Women” in the classic original STAR TREK episode, so seeing her used in a role this tragic and horrific was a brilliant casting move. 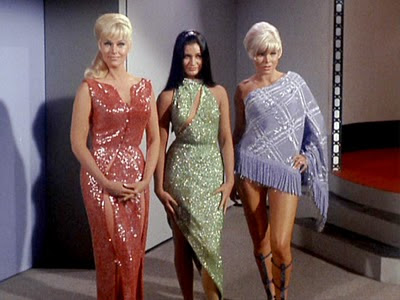 Susan Denberg (in blue) on the original STAR TREK as one of "Mudd's Women" (1966).
Bottom line: If you’ve never seen FRANKENSTEIN CREATED WOMAN, do yourself the favor and rent it immediately. And make sure to allow your tweeners to see it. It’ll kick ‘em right in the head and show ‘em what a real horror flick is, unlike the wimpy, neutered PG-13 detritus that passes itself off as cinematic fright these days. 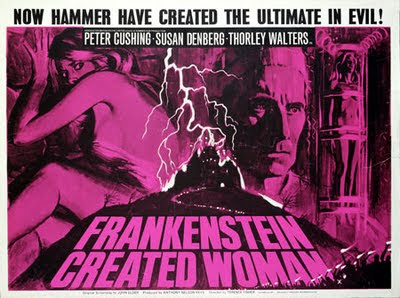