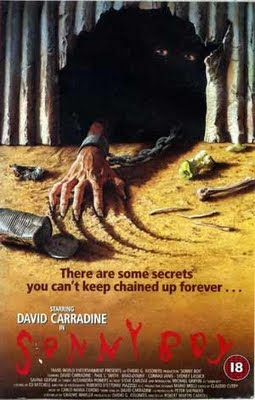 "Can this be me? This pitiful thing I see trapped in this mirror?"
-the film's protagonist, upon seeing his reflection for the first time

A favorite horror sub-genre of mine is that of the maniac family, and there are few within that small sub-genre that come anywhere near the sheer sickness that practically drips from SONNY BOY. It's one of those movies where I'm firmly convinced all involved intentionally set out to make the most fucked-up, twisted film that's humanly possible to craft, but even in a morass of derangement like this, the power of the unfortunate protagonist's simple, basic humanity refuses to be expunged. But more on that aspect later.

In the semi-surreal New Mexico town of Harmony, a young couple is murdered by Weasel (Brad Dourif), a sleazy thug who then steals their car, not noticing their six-month-old baby boy in the convertible's back seat. From there, the baby ends up in the hands of Slue (the hulking Paul Smith), a sociopathic local crime lord who lives on a desert hog farm with his cross-dressing "wife," Pearl (David Carradine in what is unquestionably his most outrageous role). NOTE: no mention whatsoever is made of the fact that Pearl is quite obviously a man — complete with a strap-on set of fillable faux breasts for nursing — and that only makes her status within the story that much more interesting. 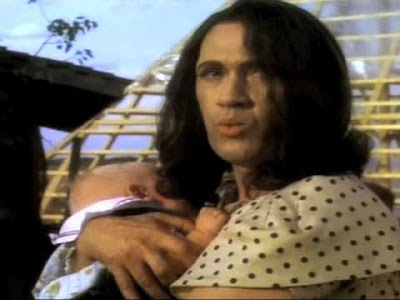 David Carradine as the doting Pearl.

Though Slue is quite clearly established as the dominant one in their relationship, Pearl overrules the annoyed Slue's intention to feed the infant to the hogs and lovingly adopts the child as her own, naming him Sonny Boy. 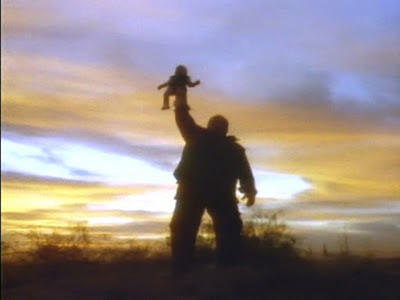 Not exactly a LION KING-like moment of new baby celebration.
In no time the viewer sadly realizes that Sonny Boy would have been better off had he been the next day's hog shit because Slue, though allowing Pearl to play doting mommy, takes control of the poor kid's "training," thrusting him headlong into a pitiless regimen of "strength-building" physical and psychological torture that over the course of seventeen years turns the child into Slue's personal biddable bipedal attack dog. The poor kid lives in a state of unwashed squalor, chained in an empty water tower and fed live chickens, and among other endless acts of cruelty foisted upon him, on his sixth birthday Sonny Boy is given "the gift of silence" by Slue: the fat, creepy bastard cuts out the boy's tongue. At age twelve, the kid reflects (in voiceover, which is how the film is narrated by a character with no tongue) on how his adoptive father teaches him "games of strength and love," such as dragging the kid behind the family over the desert rocks and sand, noting how "each game makes me stronger, giving me a skin of armor so strong that not even fire can harm me."

By the time he's a young, handsome man (though certainly quite feral and visibly filth-covered), Sonny Boy is carted around in an old-fashioned ice cream truck and used by his adoptive father as a lethal weapon turned loose against all who would fuck with his rule over the town and possibly put the kibosh on his various criminal operations. And I neglected to mention that Slue is something of a painter who seeks entry into the posh Californian arts community, and he somehow figures to use Sonny Boy as part of his delusional plan to achieve that goal.

That setup is irresistible and the whole movie can be counted as worth one's time — and it's definitely worthy of its cult status — but once it's established its bona fides the film kind of loses its twisted way, shifting gears into a full-on study of poor Sonny Boy's burgeoning humanity once he escapes from his water tower confinement and runs loose in Harmony, greatly to the consternation of the townspeople. That's all well and good but we've seen the whole "Mowgli meets civilization" thing many times before and while it's nice to have our abused hero away from the clutches of his psycho family and discovering his more tender side with the willing help of a cute local girl (who must have no sense of smell whatsoever), when the film's Level 10 sickness factor is gone, what remains is not unlike a very twisted '80's teen movie scenario that simply putts along until it reaches its apocalyptic climax and combination uplifting/ludicrous epilogue. I get that part of the film's point was to show that despite the tortures he's endured, his sorry, violent existence can't quite squash Sonny Boy's most basic, agonized humanity, and the telling of that half of the story is not terrible by any means, but I really feel the movie loses a great deal of its uniqueness with its sudden redemptive shift in tone. 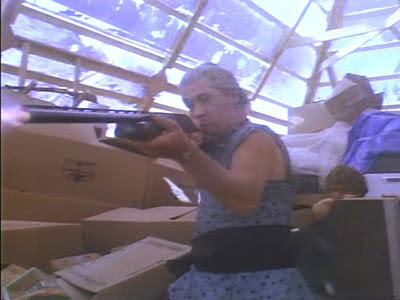 As poor Sonny Boy cowers during the onslaught of understandably outraged and heavily-armed locals, Pearl defends her family like the kickass mom she is.
Nonetheless, the first half/two-thirds of the movie is uniquely vile and twisted and well worth seeking out. The only problem with doing so is that as of this writing, SONNY BOY is not legally available on DVD in the United States unless you manage to track it down on a dodgy "gray market" copy burned to disc from an old VHS tape or laserdisc version. I first saw it ages ago on a friend's laserdisc copy and wanted to snag it for myself in a legit release, but still no dice. Then again it took forever for the classic ISLAND OF LOST SOULS to come out on DVD and Blu Ray — hitting just a few days ago, as a matter of fact — so hope springs eternal, much like poor Sonny Boy's innocent basic humanity.
Posted by Bunche (pop culture ronin) at Friday, October 28, 2011