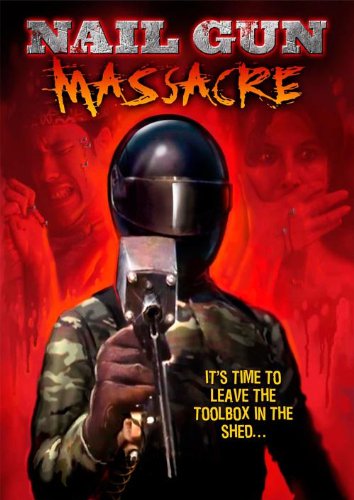 During the infamous age of the "slasher" film, the 1980's, there were tons of movies released in the wake of the success of FRIDAY THE 13th (1980) that were merely excuses to showcase gory murders, most usually of teenagers who'd had the temerity to drink, smoke weed and have sex, and the avalanche of such films continued for most of the decade, regardless of the fact that most of them were utter garbage and not scary in the least. They were dirt-cheap to make and more often than not turned a profit, so bargain basement auteurs sought ever more theoretically interesting scenarios in which to turn the screen into an unabashed charnel house. The initial wave sought to ape FRIDAY THE 13th's calendar date motif and in no time about the only date or holiday that did not have a slasher film connected to it was Boxing Day, so once those had been used up the filmmakers turned to whatever else might work, including naming their movies after favored murder implements.

Perhaps the most viscerally-titled of that second slasher wave was NAIL GUN MASSACRE, a cheapjack Texas-lensed bodycount flick that, more so than most of its bloodthirsty brethren, almost totally dispensed with plot particulars and common logic to allow more screen time for the gory stuff. I'd heard about it since it came out but never saw it because, to the best of my recollection, it never played at either of the theaters in my home county that counted as grindhouses, County Cinema and the infamous Norwalk Theater. I'd pretty much ignored it because after having seen a few dozen cookie cutter slasher flicks, the vast majority of which completely sucked, I figured I had missed nothing. But, oh, how wrong I was! 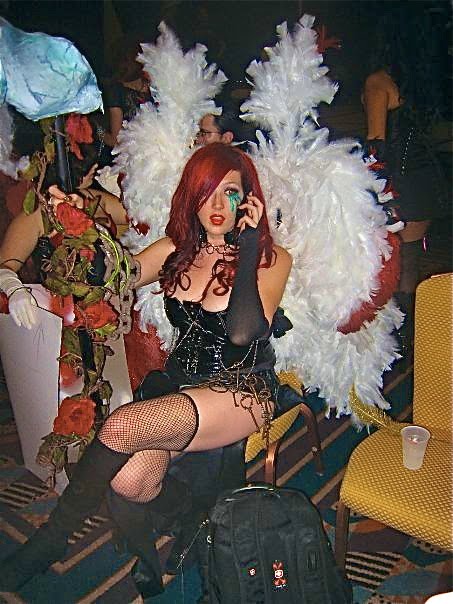 The Red Queen: the individual responsible for convincing me to see NAIL GUN MASSACRE.

My friend the Red Queen is a fellow horror addict who also shares my love of bad/inept movies, and one day while discussing such cinematic fare, she asked me if I'd ever seen NAIL GUN MASSACRE, which she stated was a favorite of hers. I told her I had not seen it and when she found that out she launched into a heartfelt pitch to get me interested in the film, and as you've obviously guessed, the Queen totally convinced me. (I've learned over the years to listen when beautiful redheads make suggestions.) She stated how the movie was so bad that its ineptness in acting, plot, effects, and damned near every other element that goes into crafting a competent film was so severe that the film crossed the line into unintentional comedy of the type that is dear to bad movie connoisseurs, making it kind of the PLAN 9 FROM OUTER SPACE of the slasher genre. I took her word for it and ordered the film from Amazon, after which I did some online checking and found her opinion to be one commonly held by several reviewers. Thus I anticipated untold anti-glories and when the movie found its way into my DVD player, I found myself the polar opposite of disappointed or ripped off.

The film opens abruptly with a shot of a construction site and six burly workers hauling a struggling woman named Linda, later revealed to be one of the site's foremen, onto a pile of sand for a gang rape in broad daylight. Thankfully, the main event takes place off-camera and after a jump cut, we're in the misty/smoky backyard of one of the rapists as his dumpy hillbilly-looking wife hangs laundry (in the smoke, I might add) while their barefoot toddler meanders about. As the brutish husband rants and raves in the house and demands his wife's presence, who should step through the back door but a camo-suited, voice-altered, helmeted assailant with a nail gun. As of that moment, NAIL GUN MASSACRE steps over the precipice into bad horror flick immortality and does not stop to look back. 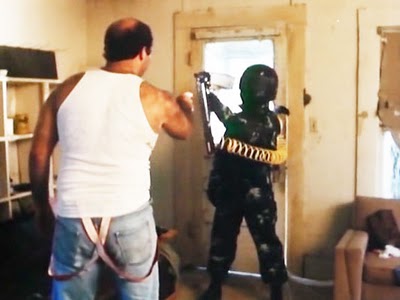 The exact moment when the glory commences.

Literally two minutes in and it already seems obvious that the killer is that woman who got violated right at the start of the film. The killer's figure is slight and the movements (and butt) are obviously those of a female, the altered voice of the nail gun-wielder sounds like Darth Vader's road show understudy, plus the motorcycle helmet's visor is about 95% obscured with duct tape so one cannot see the face of the person within, so what else are we to think other than that it's the rape victim? Anyway, the obnoxious rapist good ol' boy soon finds himself festooned with house-building nails, thus making him the first of a surprisingly high body count for one of these films.

The movie swiftly (further) devolves into a predictable suspense/scare-free escalating series of nail gun murders that take care of all the rapists, plus the killer moves on to murder random people for no reason whatsoever. It's eventually revealed that the killer is Bubba, either the brother or husband of the rape victim (I'm not sure which), and while his wish for vengeance on behalf of Linda is totally understandable, his sudden transformation into a bad one-liner spouting one-man murder factory is not. And once we know Bubba's the killer, the helmeted nail gun-wielder is no longer played by a woman. Ed Wood would have been proud.

I could go on in considerable detail but let it suffice to say that NAIL GUN MASSACRE is a triumph of awful acting, writing, and gratuitousness, all accented with a complete and utter lack of suspense/scariness in what is supposed to be a scary movie. Some of the finer points: 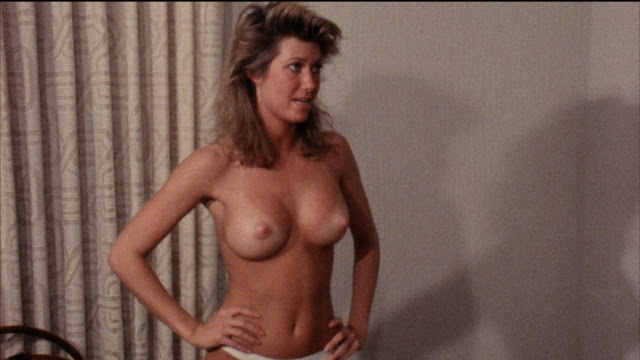 Nice clearly inhuman boob job, honey. This picture does not begin to do the gravity-defying boobs in question justice and we get a very good look at them, more than enough time to determine their total un-relation to anything akin to actual mammalia. Instead they appear to be some kind of ad for then-futuristic skin-covered polymers. 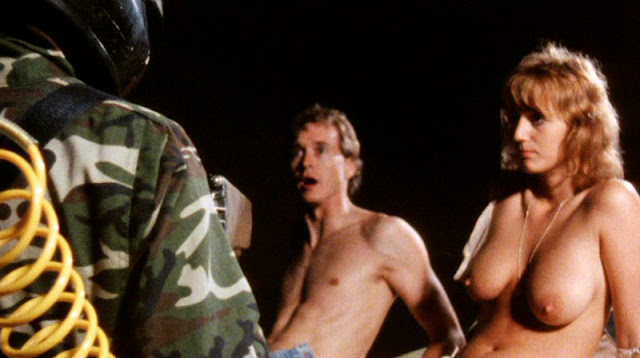 No fear, no curiosity, no surprise, no anything. It's a fascinating tour de force. Meryl Streep can suck it!
And back to Bubba turning out to be the killer, I get and agree with Bubba exacting vengeance on the actual rapists, but why kill innocent people as well? At the beginning of the film, we clearly see Linda being attacked by exactly six men. I went back and watched the movie again in fast-forward mode and excluding the six absolutely guilty parties, Bubba murders several people who had absolutely nothing to do with Linda's rape. The total body count is fifteen, which includes:
So, other than the obvious answer of "in order to pad out the running time and add more kills," why did he kill the nine extra people? We get virtually zero screen time devoted to Bubba in the first place, so we know nothing about the guy or his mental state, but it is safe to assume that he was not some balls-out generally kill-crazed loon. His goal was to get revenge for what happened to Linda, so after that was done did he just go completely insane? The script offers no answers to any of this, which only gains it points on my ludicrousness scale.