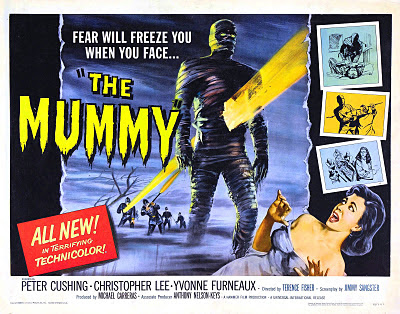 Hammer horror films were a singular flavor within the genre that more often than not delivered the goods, especially when re-inventing the stable of classic Universal monsters — Dracula, Frankenstein, what have you — for a late-1950's audience, and this take on the whole mummy thing gets my vote as the very best of the many ancient shambling Egyptian dude flicks to grace the screen. The original Boris Karloff version from 1932 is atmospheric as hell and visually stunning but the simple fact of the matter is that simply is not scary (the exceptional resurrection scene near the beginning notwithstanding) since it's basically intended to function as a supernaturally-tinged romance, which it accomplishes quite well. Hammer's version, on the other hand, goes straight for the jugular and does not pussy about with anything even remotely dreamlike. This working of the basic mummy movie tropes gives us a mummy that is not only relatively fast-moving for a bandaged and preserved corpse of a couple thousand years of age, it's large, imposing, implacable, and absolutely worthy of our most primal fear. (Not so, Karloff's wistful Imhotep.)

I don't really have to go into the plot particulars here because the film is pretty much a textbook example of what you need to have in a film of this specific horror sub-genre, so I won't. Instead I'll just give you the short list, so included among its many tropes are: 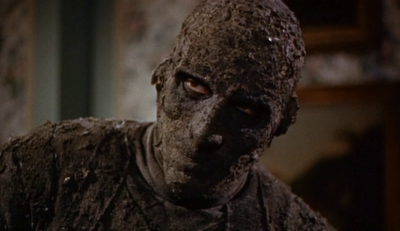 This time around we get Peter Cushing as the lone expedition member who, luckily for him, was unable to enter the tomb thanks to an injury that kept him sidelined, so he pretty much does his usual Van Helsing thing, only now it's about a mummy rather than the lord of all vampires. Christopher Lee is also on hand as Kharis, the hulking mummy, and he's a monster to be reckoned with. Physically powerful and dogged in his mission of sacred retribution, Kharis is by far the screen's scariest mummified engine of destruction and he's just an actor in grimy wrappings. No amount of CGI can come close to what Lee brought to the role, and you can quote me on that.

There were subsequent Hammer mummy films, but they kinda bite the big one in comparison to this and are best ignored. Rent this and you won't be disappointed, plus it's suitable for the whole family (provided the little ones can handle a genuinely scary mummy).
Posted by Bunche (pop culture ronin) at Saturday, October 08, 2011