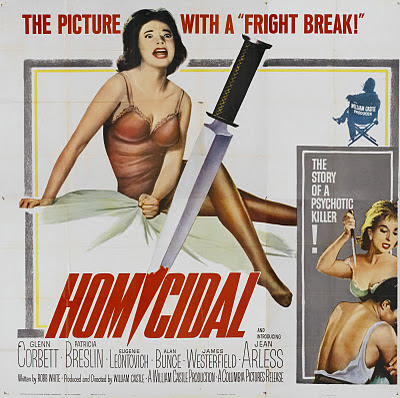 "A WORD OF WARNING! Please don't reveal the ending of this picture or your friends will kill you - IF THEY DON'T, I WILL!" - William Castle

How many movies can you name where the director makes that kind of threat at the flick's end?

Easily the best of the many ripoffs to come in the wake of Alfred Hitchcock's epochal PSYCHO (1960), I had the pleasure of going in cold and seeing HOMICIDAL at Manhattan's Film Forum when it ran there a little over a year ago, and I gotta say it's tough to discuss gimmick-meister William Castle's HOMICIDAL without giving away its surprises but I'll give it a shot. Perhaps the simplest way to describe it is to state that it's an over-the-top, played straight but campy parody of the Hitchcock proto-slasher classic (an aspect I did not expect going in).

Ventura, California, September 5th: sinister blonde Emily (Joan Marshall, billed as Jean Arless) purchases a gold wedding band, checks into a hotel as "Miriam Webster" and cryptically offers a handsome bellboy two-thousand bucks to marry her on September 6th, after which the marriage will be immediately annulled. The bellboy accepts the deal and the pair set off to the house of a certain justice of the peace at midnight on the 6th, where they awaken the justice to perform the wedding in the wee hours. When the ultra-short ceremony concludes and the justice moves to cop a kiss from the bride, "Miriam" produces a long knife from her clutch and repeatedly stabs the justice in the stomach, in full view of the man's wife and the horrified bellboy, after which she flees the scene, stealing the bellboy's car to make her getaway. Abandoning the stolen car and switching to her own ride, Emily tears down the highway while hearing on a radio news report that the justice she stabbed has died, thus making the assault an outright murder. Arriving at the home she shares with the aged wheelchair-bound and mute family nurse, Helga (Eugenie Loentovich), Emily cleans the murder weapon and creepily announces the savage killing she committed to the old woman, gleefully noting that the justice "died screeeeeeeeaming!!!" The following morning, Emily fixes breakfast for the fearful and helpless Helga when the real Miriam Webster (Patricia Breslin), a florist, arrives, bearing flowers for the aged nurse... 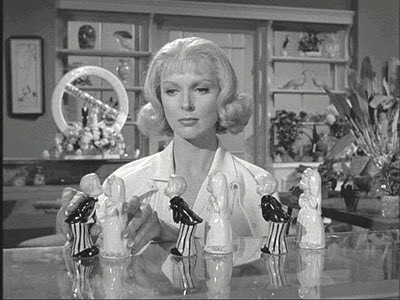 Emily (Jean Arless) in Miriam's florist shop, moments before trashing the place in a fit of rage.

As the story unfolds, we discover that Emily has recently returned from Denmark, where years before she met Warren, the real Miriam's half-brother, who visits Emily and Helga every Thursday. Warren's already rather flush but is on the verge of inheriting a huge sum of money, and as his mysterious backstory unfolds, an avalanche of bizarre family secrets deluges the audience. It's also seen that Emily has the hots for Karl (Glenn Corbett), a young swain who runs a soda shop/pharmacy, and she will stop at nothing to make him hers, despite the fact that Karl and Miriam are an item. So what we have here is a love triangle with a genuine maniac at its center, twisted family history and secrets, (of much interest, especially in the climate of fifty years ago), a police investigation into the murder that dredges up all kinds sordid shit, and when the stunning final truth as to the whys and wherefores regarding Emily are finally revealed, it's a climax that nearly rivals that of PSYCHO in terms of material that must have been truly mind-blowing or its era's audience. My advice to you is to check this one out and try to put yourself in the place of a viewer watching it in 1961. 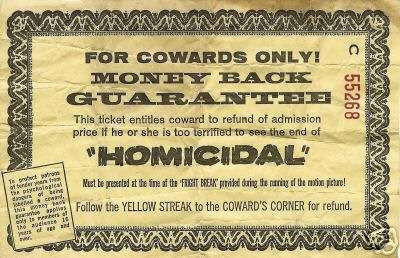 Director William Castle's movies were notorious for the cheesy/fun gimmicks employed in promoting them, and in the case of HOMICIDAL there was a moment toward the film's end where the house lights come up and "fright break" clock counting down forty-five seconds appears onscreen, signaling how much time the audience has in which to follow a yellow stripe out of the auditorium into the lobby if they're too scared to handle what's about to happen at the ending. Once in the lobby, chickenshit audience members can get their money back, provided they stand in the "coward's corner" and allow those who sat through the whole film to file past and bear witness to their shameful cowardice. (That was back in 1961; the Film Forum's manager told the audience up front that there would be no refunds.) 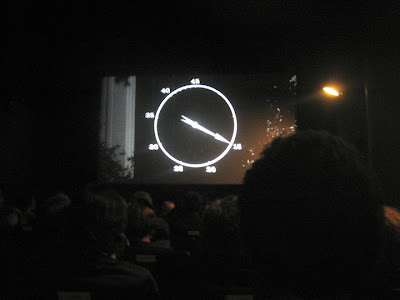 The "fright break" timer, as seen from where I sat in the audience.
In the audience when I saw the film, a guy and his wife — obvious plants — freaked out when the timer appeared, screaming that they just couldn't take the sheer horror onscreen and, as the guy showered himself with popcorn, they swiftly fled the theater. There was a smattering of applause. 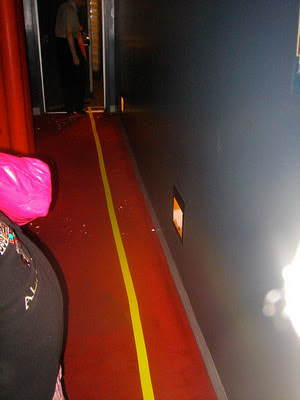 The yellow stripe leading out of the auditorium to... 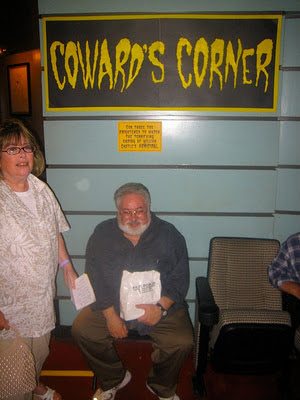 ...the "Coward's Corner." This is the couple that "freaked out." 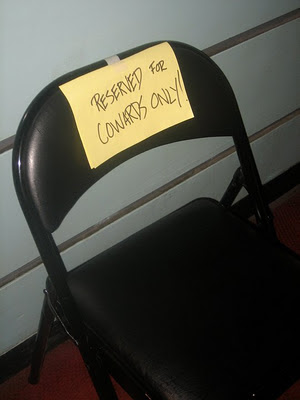 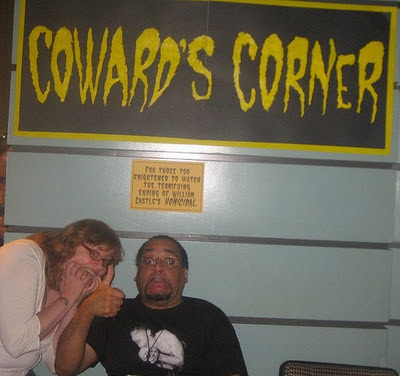 Me and the lovely Sukihoshi simulate being a pair of complete and utter pussies. (Hey, in my case you are what you eat!) 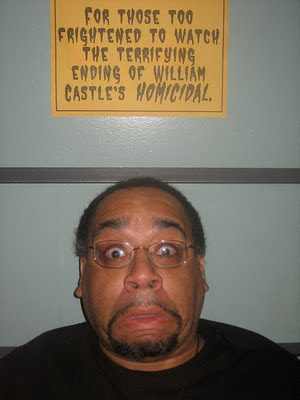 I've had this movie on DVD for years. I agree 100% with your review. Gonna get Linda to watch it this week.

Being the expert on adult entertainment, you might want to check out Susie Bright's new 'book' - http://sexuality.about.com/b/2011/10/19/susie-brights-porn-history-gold-mine.htm