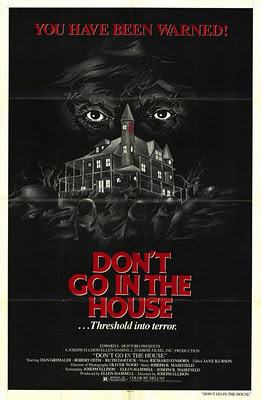 "Fucked up," thy name is DON'T GO IN THE HOUSE. Shot a year before the "slasher" boom of the 1980's kicked of with FRIDAY THE 13th (1980), so it can't be considered as having been influenced by that explosion of cinematic carnage, DON'T GO IN THE HOUSE is permanently set in time thanks to its end-of-the-disco-era elements and its lack of blood showering everywhere (that kind of thing didn't become common until after FRIDAY THE 13th's sanguinary excesses). But don't think its lack of blood makes it any less nasty than its more cutlery-fetishizing brethren...

Somehow managing to be even more simple/sparse in the plot department than most films in the sub-genre while simultaneously containing more genuine character development/motivation than nearly all other slasher films combined, DON'T GO IN THE HOUSE follows the sad and twisted path of Donny Kohler (Dan Grimaldi), a twitchy loner who works at an industrial incinerator plant. The adult product of horrible abuse by stovetop fire at the hands of his sadistic mother who punished him for every perceived "sinful" thought, Donny's in his thirties and still lives at home with the now-aged harridan, a pitiful case of having been emotionally crushed and stunted into a state of arrested adolescence. While witnessing a co-worker nearly get fatally immolated during an on-the-job accident, Donny's utter lack of reaction or concern about the incident gives us our first real indication that something's seriously wrong with the guy. (Thanks to his failure to help his co-worker, we also see that Donny is not exactly well-liked by his fellow employees, most of whom regard him as a freak.) Upon arriving home after the incident, Donny discovers his mother dead in her favorite chair and at last, free of her domineering physical presence and perpetual verbal abuse, his mind snaps and his first act of rebellion is to play his (crappy made-for-the-movie) disco music at top volume. Thus empowered by disco — long known to be the soundtrack of rebellion — and fueled by the hectoring voice of his mother in his head, Donny skips work, builds a large fireproof room in his house (or maybe it was always there and merely hidden), buys an asbestos-worker's head-to-toe fireproof suit from an army surplus store (???) and embarks on a joyless spree of picking up young, attractive women, taking them to his house, rendering them unconscious and then chaining them naked from the ceiling of the fireproof room. Then he breaks out the flamethrower. 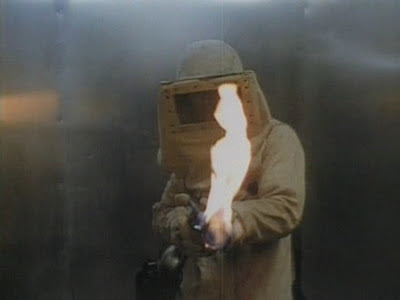 Once his screaming victims have been torched, Donny dresses their charred bodies in his dead mother's clothes and arranges them in the living room, all the while conflicted by clashing childlike emotions of providing the corpses with "love and comfort" and a violent hatred and distrust of women engendered by his treatment by his mother. Basically, it's PSYCHO's Norman Bates taken to a particularly savage extreme, so it's only a matter of time until Donny's towering dysfunction, utter inability to function outside of his house of horrors, and a series of hallucinations collapse his fucked-up world around him, and its a fall that's agonizing to watch.

There's a fine line between horror and the "psychological thriller" but DON'T GO IN THE HOUSE gets my vote as a horror flick due to its theme of the endless cycle of abuse coupled with its hideous death-by-flamethrower hook and charred zombie hallucinations. Who doesn't find immolation to be possibly the most excruciating of possible death scenarios? It's bad enough to be caught in a house fire or a flaming car wreck with no chance of escape but to to have some faceless maniac chain you naked from a ceiling and incinerate you alive as part of a premeditated course of psychotic intent? Jesus fucking Christ... If that doesn't count as straight-up horror, I don't know what does.

As or the movie itself and its overall tone, I don't know quite what to think. I found it far too bleak and depressing to be even remotely entertaining, which is not to say that it is at all badly made, and it's so dark and dour from its opening moments that it's a complete and total bring-down that doesn't thrill with the frisson (Ooh! Fancy film-fuck word!) one experiences with most horror films. It's just a miserable, hate and sadness-filled well of despair and I'm not sure I can recommend it to anyone unless they dig been terminally depressed. You thought SOPHIE'S CHOICE made you want to slit your wrists or jump off the nearest bridge? That film has nothing on DON'T GO IN THE HOUSE's low-budget grimy atmosphere. I've seen DON'T GO IN THE HOUSE twice, once when first encountered on DVD and a second time a couple of days ago when watching it to refresh my memory for purposes of this review, and I assure you I will never return to it.

Now that that's over, I feel the urge to take a long, thoroughly-scrubbed shower and watch something like THE SECRET OF MAGIC ISLAND (1956, France/Italy; released in the U.S. in 1964), a movie entirely populated by cute little puppies and kitties and all sorts of other adorable critters having happy adventures. Anything to wash the charbroiled stink of DON'T GO IN THE HOUSE from my consciousness.