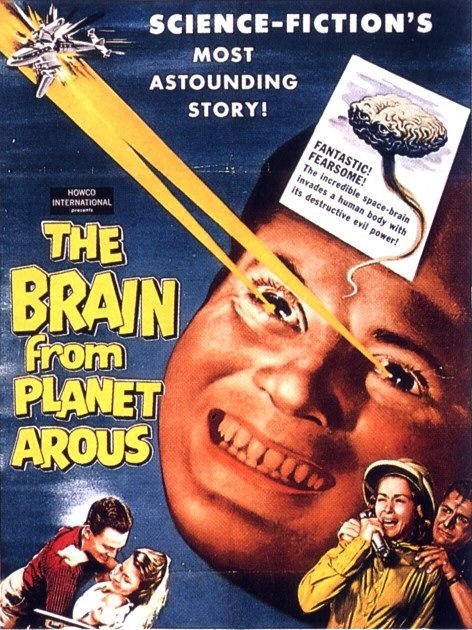 One of the things I mourn most since the advent and proliferation of cable TV is the death of the local sci-fi/horror movie showcase that was a beloved fixture on television stations of any given American region. Here in the Tri-State area we had several: CREATURE FEATURES (not to be confused with the exceptional Californian version hosted by Bob Wilkins), FRIGHT NIGHT, SCIENCE FICTION THEATER, THE 4:30 MOVIE and CHILLER THEATER, to name but a few. Those programs gave me and like-minded kids quite an education on the classics and not-so-classics of the genre and one can only find the flicks they once ran on sometimes obscure DVD or if you happen to get lucky with Turner Classic Movies. But wherever they may turn up, those cheesy old sci-fi and horror time-wasters often had items of raw imagination and wonder/horror that stuck for life with the kids who watched them and in my case one of the most indelible is 1957's totally ridiculous and insane THE BRAIN FROM PLANET AROUS (or "Planet Arouse," as a certain former lady friend once snarkily referred to it).

When two scientists investigate mysterious radiation readings on "Mystery Mountain" (*snicker*), they get more than they bargained for when they enter a previously non-existent cave and discover Gor, a humongous floating brain with glowing eyes and a streak of towering assholism a mile wide. One scientist is killed by Gor's radiation powers while the other, Steve (played by Fifties sci-fi mainstay John Agar), ends up possessed by the villainous gray matter since it cannot survive on Earth without a host. Y'see, Gor's a fugitive criminal from the planet Arous ("Arouse!" as a former lady friend of mine once amusingly observed) and he intends to enslave the Earth with his super-intellect and bitchin' radiation powers, build a spaceship so he can haul ass (?) back home and then take over the known universe. 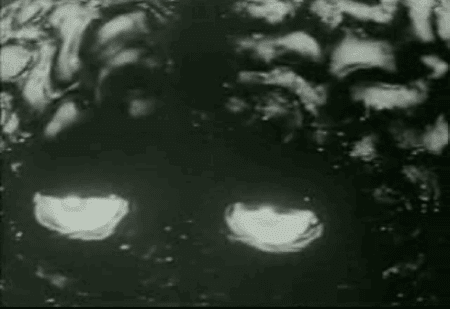 Gor, aka the Brain from Planet Arous, a critter who would have been right at home on a vintage episode of THE OUTER LIMITS.

At that point even at the age of eight I had to stop and say, "Wait a minute. If this brain-thing needs to have human slaves build it a spaceship, how the fuck did it get to the Earth in the first place? And if he's just one of a race of super-brains, doesn't that mean that the other super-brains would be out to either put his ass (?) back in jail or just destroy him outright?" At the time I didn't notice the dodgy special effect meant to represent a crash-landing spaceship, but the other query was soon answered...

Steve makes it back to civilization after having been AWOL for a full week, but his fiancee Sally (Joyce Meadows) thinks nothing of her man disappearing into the desert wilderness with Dan for long periods of time (BROKEBACK BRAIN, anyone?), or rather she doesn't until Steve plants a panty-drenching kiss on her and, when she responds quite favorably, tries to rape her. Luckily what could have been a horrible, alien-possessed felony is interrupted by Sally's faithful pooch George, a big white German Shepherd, and the sex-crazed Steve is driven away. The near-ravishment spurs Sally and her dad to check out the cave on Mystery Mountain for themselves and it is there that they meet Vol, another disembodied brain from Arouse, er, Arous, only this time it's a cop sent to stop Gor before shit gets too thick. Vol manifests at Sally's house and fills her in on his plan: Gor must periodically vacate Steve's body and during that time briefly becomes solid (in order to process oxygen or some such nonsense), at which point it's possible to kill Gor by nailing him in an anatomical bit analogous to the human brain's Fissure of Rolando. But until Gor takes the aforementioned break, Vol decides to stick around and keep an eye on things from within the body of Sally's dog. 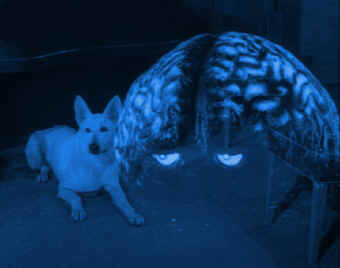 I swear I saw something exactly like this the last time I ate a batch of "magic mushrooms."

Meanwhile, Steve goes totally fucking berserk as Gor uses his body to wreak all manner of super-powered, radioactive mayhem, turning his host's eyes silver years before the same thing happened to Gary Lockwood in the original STAR TREK's second pilot, "Where No Man Has Gone Before," a process requiring John Agar to suffer the agonies of a pair of foil contact lenses that were by all accounts painful as hell. 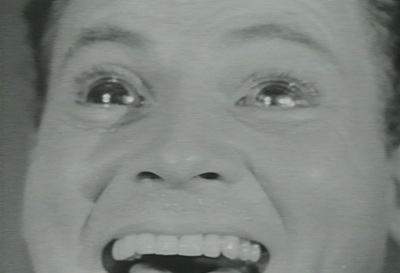 So Steve/Gor is totally insane and Vol awaits the moment when he can swing into action — with an assist from a partner who has hands and arms and is thus able to wield an axe — but how will it all end? You can pretty much guess, especially since the screenplay is not exactly designed to challenge the viewer with a labyrinthine mystery, but it's a hell of a lot of over-the-top fun getting to the denouement, a bit of business that was kind of shocking from an eight-year-old's perspective.

By no means a masterpiece, THE BRAIN FROM PLANET AROUS is nonetheless worth checking out for its kinda-creepy aliens that appear to have been fashioned from papier mache and bob about on lengths of fishing wire with less grace than a piñata obtained from the local Party City. 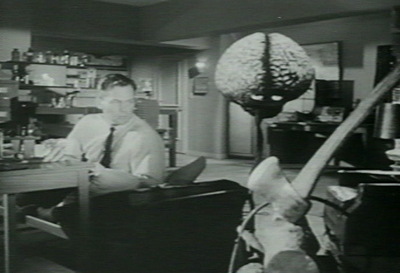 
But as I said at the beginning, this goofy little movie has stuck with me since childhood and I have nothing but love for the brains themselves. In fact so much so that during my brief post-college pre-Marvel Bullpen freelance art career I had business cards printed up with a slimy-looking pinkish-purple brain (with dangling brain stem) emblazoned on them, only with a happenin' pair of Wayfarers obscuring the glowing eyes. So I say add this baby to your to-watch queue, score some righteous buds or your favorite fermented libation, kick back with some friends or a like-minded squeeze and enjoy the sight of one man's spectacular descent into very literal brain-damage.
Posted by Bunche (pop culture ronin) at Sunday, October 01, 2017