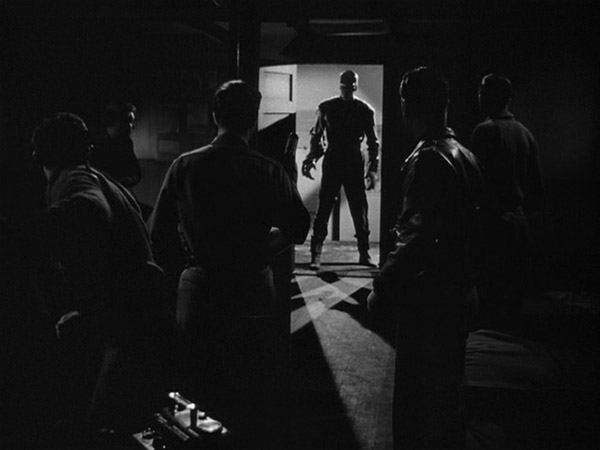 A United States Air Force team is dispatched to a research station at the North Pole, where the research team have discovered a recently-crashed and flash-frozen extra-terrestrial spacecraft. Though their recovery efforts accidentally cause the flying saucer to self-destruct, the crew manages to salvage a large block of ice containing an 8-foot-tall manlike alien life form. 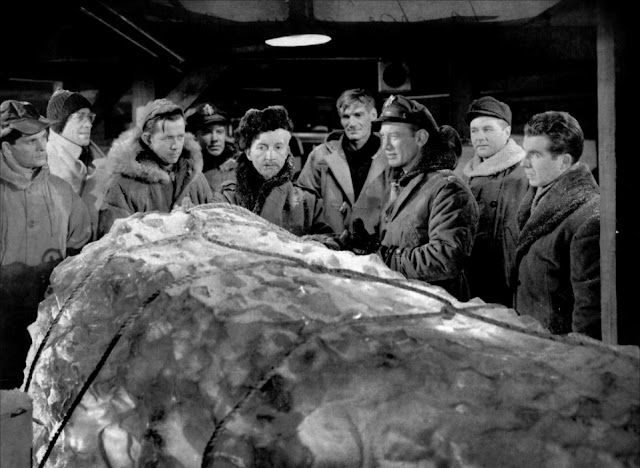 The military takes over the situation and enforces by-the-book protocols for handling the frozen alien, much to the dismay of the scientific research team. However, the researchers mostly see the wisdom in caution, so they agree to wait for the soldiers to receive further orders. While they wait, a mishap involving a heat lamp thaws the spaceman, and it's out of the ice, it proves itself to be one seriously tough and aggressive son of a bitch whose presence and continued existence could spell the end of the world as we know it.

I first saw THE THING FROM ANOTHER WORLD when I was ten years old and it played on Channel 9. I watched it with a classmate who was sleeping over at my house that night, and since both of us were fans of sci-fi and horror movies and had both heard of the film, it was something we expected to be little, if at all, different from the many 1950's flying saucer and aliens flicks we'd already seen at even so tender an age. What we absolutely did not expect was an intense shocker made for grownups that featured an intelligent script populated with characters who spoke and acted in a realistic manner. And once the titular "thing" was on the loose, the film became a study in true terror, perhaps the first horror movie I saw that was genuinely scary as hell. 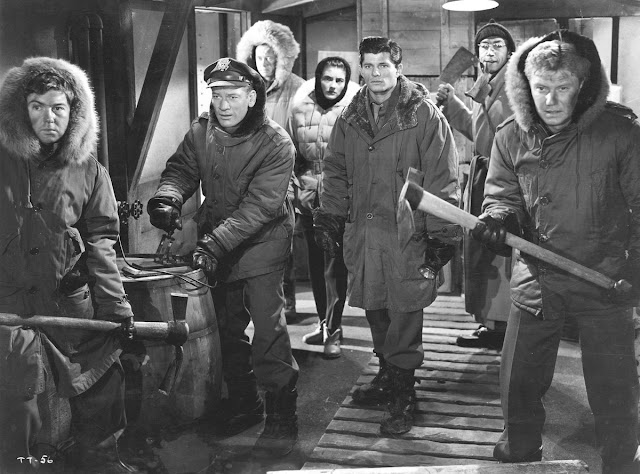 The alien is tall and humanoid and we never really get a good look at it in detail, but believe me when I tell you that the motherfucker is very bad news indeed. It's deduced to be a highly intelligent vegetable-creature — an "intellectual carrot" — that does not contain blood and may not be able to die, as we know of the concept, is possessed of great strength and clawed hands, feeds on the blood of mammals, regenerates lost limbs, and rapidly reproduces via seed pods. In short, it's a formidable being and, unfortunately, we'll never know if it may have been benevolent as it was immediately shot at the moment it emerged from the ice, and was driven into the deadly cold where it lost an arm to a pack of defensive sled dogs, so its hostile actions may have been committed in self-defense. But an answer will never be had, for the soldiers and the research team must fight for their lives as the apparently invulnerable creature goes on a vicious and deadly rampage through the isolated station and its grounds, killing sled dogs and slashing the throats of humans, which it then hangs upside down like cattle in a slaughterhouse (offscreen, mind you). 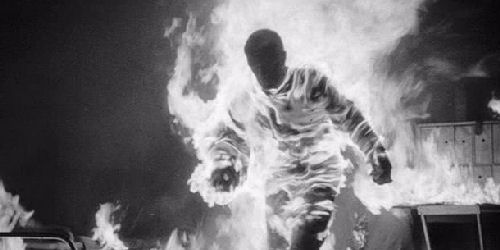 Most man-sized monsters can be vanquished with fire. Not this guy...

If not the very first of the 1950's decade-dominating wave of flying saucers-and-aliens movies, THE THING FROM ANOTHER WORLD early on defined the genre as a showcase in which plucky human protagonists must wage war against hostile invaders from beyond. But while this was a smart and groundbreaking work of great importance to the genre and to cinema in general, most of the Earth-meets-aliens films that followed in its wake focused more on special effects spectacle or shoving bug-eyed monsters in our faces, often minus anything resembling a story with a brain in its head or something that could satisfy adults as well as matinee-attending kiddies. As an exemplar of the smart science-fiction film, THE THING FROM ANOTHER WORLD stands tall, while also simultaneously inventing the cross-bred science-fiction/horror movie. Without THE THING FROM ANOTHER WORLD to lay the groundwork, there would never have been IT! THE TERROR FROM BEYOND SPACE (1958), ALIEN (1979), and of course the 1982 remake, John Carpenter's THE THING (but more on that later). Though perhaps tame by the standards of today's audience, this is string meat for its era and must be approached from the mindset of someone who's never seen this kind of film before. As such, it's a real kick in the head. 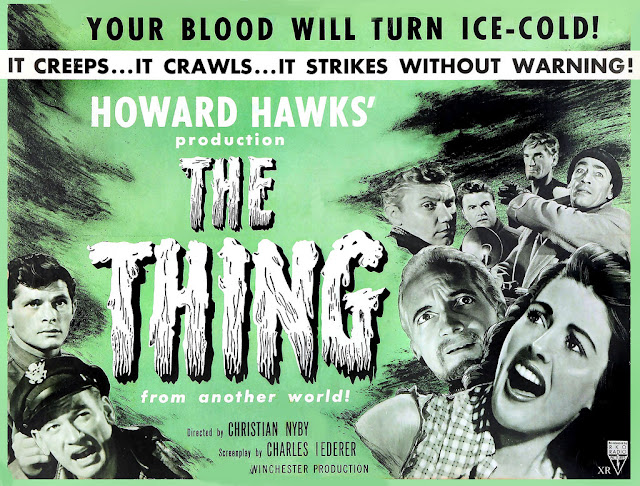 This may be an apocryphal tale, but I read somewhere that scenes of the Thing draining the blood from the hanging bodies may have ACTUALLY BEEN FILMED, and there were MANY crystal clear shots of Arness in action! Of course, this may all just be rumors and legends.