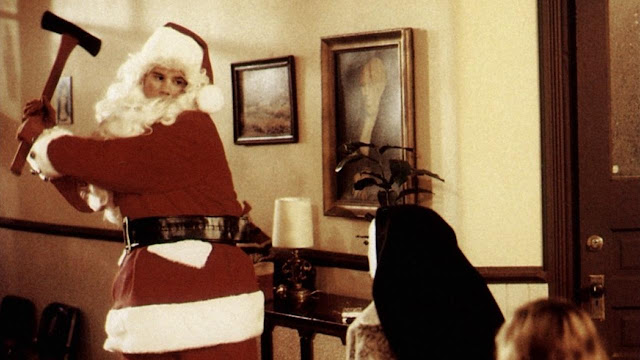 Santa Claus is coming to town...WITH A FUCKING AXE!!!

Yeah, yeah, I know this a Christmas movie, but while considering '80's slasher flicks to talk about for 31 DAYS OF HORROR, this one kept coming back to mind. Thus I haul it out as that rarest of the rare: a combination cookie-cutter seasonally-themed slasher flick and a movie that you can run for the family at Christmas that is guaranteed to offend all and sundry.

Everybody has their favorite Christmas movie. IT'S A WONDERFUL LIFE, MIRACLE ON 34th STREET, WHITE CHRISTMAS, THE NIGHTMARE BEFORE CHRISTMAS (which, in my opinion, is more of a Halloween flick), and THE SANTA CLAUSE all vie for time on the airwaves each December, and in the case of the downright hilarious A CHRISTMAS STORY the bloody thing gets put into heavy rotation as of Thanksgiving, in some cases airing repeatedly for twenty-four hours on one station. It's Christmas spirit overkill and I'm saddened to see the Christmas flicks that suit the needs of myself and others of like mind — curmudgeons who find the annual overkill both nauseating and oppressive — get no respect and are given pretty short shrift by the general public. I'm talking about recent cult favorite BAD SANTA, and the far more offensive SILENT NIGHT, DEADLY NIGHT.

Both flicks kicked up a certain amount of controversy for having the nerve to be anti-everything the season stands for and filling the screen with lurid tastelessness, but that was the raison d'etre for both movies and BAD SANTA was definitely the more high class effort. It had competence behind the camera, actors you'd actually heard of, and a funny though admittedly vile script, so it definitely counts as a legitimate piece of well-crafted cinema. The same cannot necessarily be said of SILENT NIGHT, DEADLY NIGHT.

Arriving at the ass end of the first wave of the infamous "slasher movie" cycle of the 1980's, this flick tells the tragic story of Billy, a sweet little boy whose life turns into a gigantic habanero turd on the night his family visits Grandpa, an old geezer who's been catatonic for years. When the rest of the family is out of earshot, Grandpa — strongly resembling Bill Murray in a cheesy wig and beard — 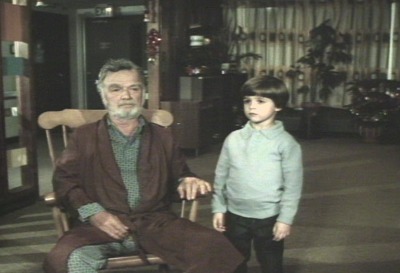 speaks for the first time in years, eerily warning Billy, "Ya know what happens on Christmas? Santy Claus visits all the little boys and girls, and if they bin bad...he punishes 'em! So if you see Santy Claus a-comin', you better run, boy! RUN FOR YOUR LIFE!!!" immediately after which Grandpa returns to his drooling catatonia. Needless to say, Billy's parents end up viciously murdered on the roadside by a crook in Santa drag, an event that he witnesses, thus dooming him to a lifetime of scarring yuletide memories. 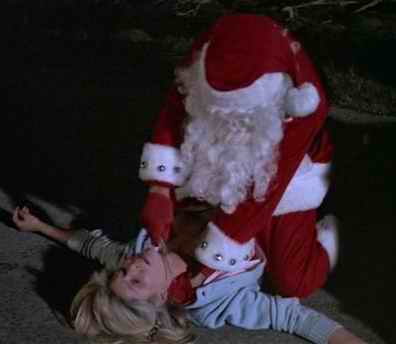 The lesson here: do NOT stop for random roadside Santas.

Poor Billy, along with his infant brother, is relegated to a Catholic orphanage, complete with a Mother Superior who could have taught Torquemada a thing or two, where he endures years of physical and psychological abuse, permanently warping his mind against the tripartite horrors of sex, the Christmas season and all its trappings, and, of course, nuns. 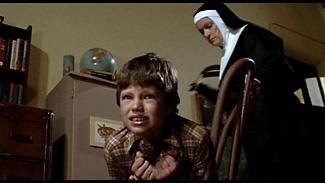 As the years pass, Billy grows into a handsome, hulking young hunk and gets a job at a local toy store. He's a bit twitchy but basically okay as a person and a worker, but when the Christmas season rolls around Billy is forced to don a Santa suit for the store's Christmas party. Spurred on by liquor and witnessing the almost-rape of a co-worker by the odious stock boy, Billy snaps and wanders about the neighborhood indulging in a rampage of castigation, bellowing "PUNISH!!!" as he nails people in their heads with an axe, a hammer, or what have you. 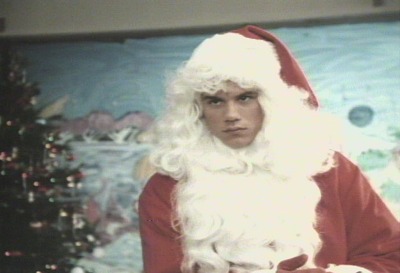 The film is strictly bargain basement, and its low-budget only adds to it's lurid charm. I mean, what's not to love about a crazed lunatic in a Santa suit killing off an assortment of stock slasher movie non-characters? Hey, they were drinking, and fucking and stuff, so they had it coming! And among this cannon fodder can be counted the lone thespian that I've actually heard of, namely Linnea Quigley, the preeminent "scream queen" of eighties horror best known for her memorable butt-nekkid cemetery dance in THE RETURN OF THE LIVING DEAD (1985). 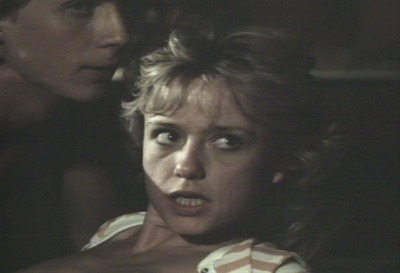 If your movie needed gratuitous nudity or bared boobs Linnea was the gal to call, and she doesn't disappoint here (the one drawback being that her lovely jubblies end up with a pair of wall-mounted deer antlers protruding from them after Billy impales her for messing around with her boyfriend while she was supposed to be babysitting).

SILENT NIGHT, DEADLY NIGHT certainly isn't the film to put on for grandma during her Christmas visit, but it's fun for us sick-of-the-season types and even has moments of pitch black humor: after wiping out the babysitter and her boyfriend, Billy is confronted by the adorable little babysitee, a wee girl who thinks he's the real Santa Claus (despite Billy's beard hanging off and him being rather blood-drenched). When he sees her he asks if she's been good, to which she vigorously nods in the affirmative. As he draws ominously closer, Billy asks, "Are you SURE you've been good?" The little darling emphatically assures "Santa" that she's been a good girl, so Billy hands her a present: a bloody box-cutter that'd he'd earlier used to slash a victim's throat. As he dazedly wanders out into the night the camera returns to the sweet little kid who now has a look on her face that fairly screams, "What the fuck kind of present is this shit?" Get used to it, sweetheart, this is just the first of many disappointing Christmases to come.

When all is said and done, SILENT NIGHT, DEADLY NIGHT is just the ticket for a drunken Christmas Eve get-together of friends you haven't seen since last year, all of you eager to ditch your dysfunctional families for a few hours and be the reprobate that you can't get away with being while staying with the folks. It's a colossal "fuck you" to all the sentimental tripe that's been shoved down your throat for at least the past month, so slip on your K-Mart Santa suit — make sure the beard is in no way properly aligned — crack a few cold ones, and let the film take you along on a fantasy in which it could be you planting a fireman's axe into the treacle-addled pate of the Christmas season. And whatever you do, avoid the sequels like the plague; they may just be the very worst franchise in the entire horror genre, even edging out the wretched HOWLING followups. Seriously, they fucking suuuuuuck... 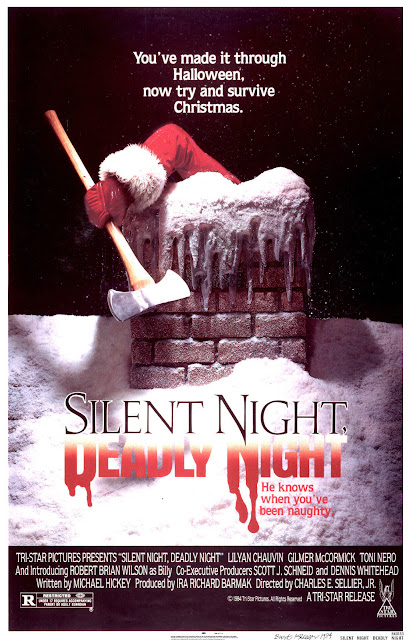 The classic theatrical release poster, which reportedly caused great consternation for parents when it was displayed at shopping mall movie theaters.
Posted by Bunche (pop culture ronin) at Tuesday, October 10, 2017