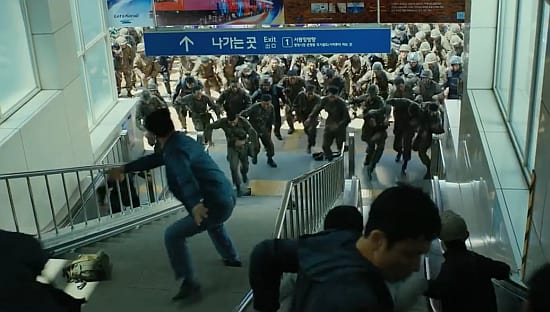 Hell on earth, and there's nowhere to hide.

Seok-Woo (Gong Yoo) is a workaholic whose obsessive concentration on his job has led to estrangement from his wife (who has left him) and his unintentional neglect of Soo-An (Kim Su-an), his sweet little girl. For her birthday, more than anything else, the depressed child wants to visit her mother in the city of Busan, so her father, racked with guilt over having missed his daughter's recital where she had practiced a song intended for him, takes a rare day off from work and accompanies Soo-an on the long train journey departing from Seoul. But as the train leaves the station, Soo-an looks out of the window and sees people outside acting strangely. One of those individuals boards the train, unnoticed by the train's security officer, and once she's on board she makes her way into the bathroom to apply a makeshift tourniquet to her mauled leg. She eventual emerges from the restroom but it's clear that there's something seriously wrong with her. She collapses in the vestibule between cars and, as a female staffer attempts to help her, the afflicted woman goes into convulsions and rises as a white-eyed, blood-drooling, savage killing machine. She attackers her would-be rescuer, who also turns into an insane, ravening killer, and as the two claw and tear their way through a carload of terrified passengers, the infection rapidly spreads, creating a horde of zombie-like "infected" whose urge to kill is stimulated by them being able to see their prey with their limited vision, and when their ability to visually perceive victims is impaired by darkness or obscuring windows with some form of a shade, they track with their hearing. 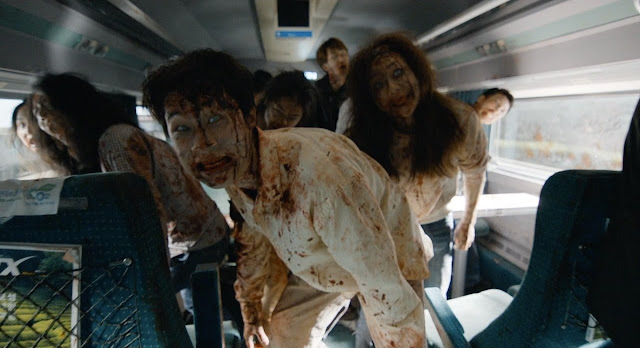 The implacable hordes of the Infected.

To say more about the plot's details would spoil the experience for potential viewers, so I'll merely make a few points and move on:


As you have no doubt figured out by now, I rate TRAIN TO BUSAN as a solid winner. It's tension-filled, brutal, and incredibly bleak, and is hands down one of the finest horror efforts of the decade. HIGHEST RECOMMENDATION, and I say that as a guy who is waaaaay past sick and tired of zombie movies. 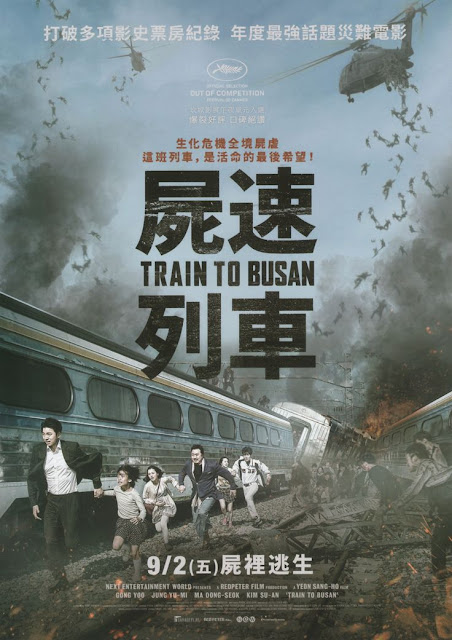