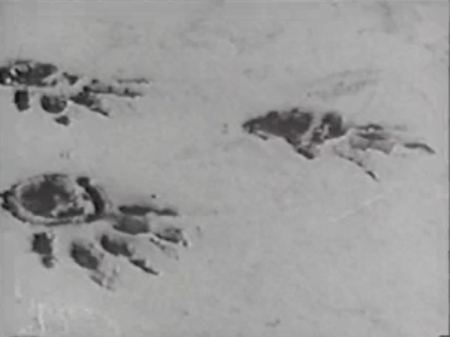 When I was but a budding "monster kid," I religiously watched all of the Tri-State area's pre-cable sci-fi/horror movie showcases, and one of the pitfalls of that area of gaining knowledge was the acceptance of the unavoidable fact that for every classic/good/worthwhile film that one saw, there were was a disproportionate amount of flicks that ranged from the mediocre down to the rancid. But then there was the very special breed of bad  sci-fi/horror movies, films that were so boring, conceptually feeble, and all-around terrible that they are worth seeing simply because you can;t believe that the filmmakers had the whale-sized balls to release such a work and expect innocent people to pay money to see it. Such was the case with SOUND OF HORROR, a Spanish would-be shocker that fails on every level and features a "gimmick" monster so bad that it's actually kind of endearing. 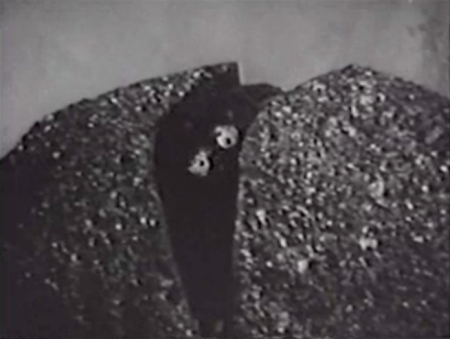 Ancient horror hatches in the 20th century, and promptly vanishes...

I've already made it clear that this movie sucks a high hard one, so I won't bother to go into thorough details on its plot particulars. All you need to know is that a bunch of archaeologists in Greece unearth a cave where a treasure is purportedly hidden, while also unwittingly unleashing a slavering dinosaur-like creature with homicidal tendencies. It's the humans versus the monster in a dull and drawn-out battle for survival, but what makes the movie worth sitting through once is that fact that the dinosaur is completely invisible, its presence betrayed only by its footprints, the ghastly murders it commits, and its distinctive wail (hence the title). Yes, you read that right: The dinosaur is fucking invisible, which was likely a new low in cheapjack filmmaking at the time.  All we get are some murky quasi-looks at it through some smoke and shots of its footprints. 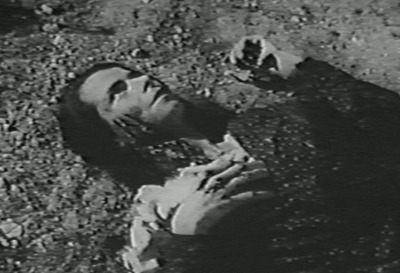 Mauled to death. She sure didn't see it coming...

Even by the standards of the most frugal of low-budget filmmakers, releasing a monster movie where we simply do not see the monster is shameless, an insulting ripoff, and unintentionally hilarious. It's impossible not to crack up as a cast of no names — with the notable exception of Hammer stalwart Ingrid Pitt, who is given nothing to do here — react to, flee from, and be torn up by a whole lot of screaming nothing. And for me the highlight of the movie is when two of the character-free heroes throw hatchets it where they think the monster is, and we see the hatchets stick in mid-air, with each landed hit being punctuated by the invisible dinosaur's cries of pain and indignation. 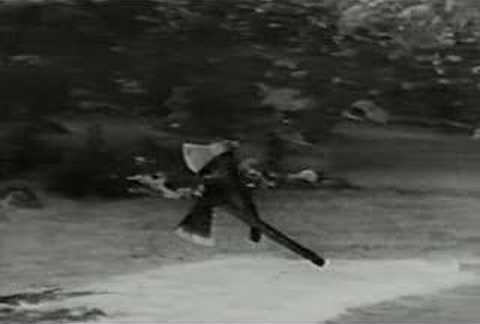 Not since Ray Harryhausen has the silver screen been graced with such amazing monster effects!

And during the moments in the narrative when the monster's not invisibly causing mayhem, we get loads of footage of the humans hanging around gabbing, discussing the aforementioned lost treasure in ways that make you just not care about it, and we also get the women shaking it to Spanish-accented surf music and a traditional Greek dance number where the observers clap along to the music while actually being completely off-rhythm. 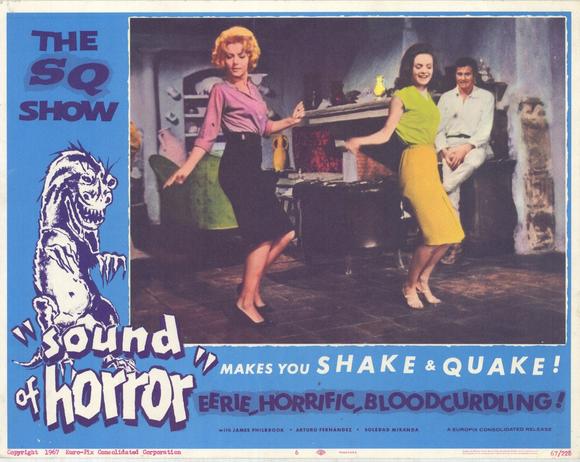 Can you stand the sheer terror???

Like I said, SOUND OF HORROR is a turgid piece of shit, but how can you not give it points for the idiocy of its invisible dinosaur? If you find yourself with insomnia some night, put this film on and I guarantee you a night of deep and blissful slumber. 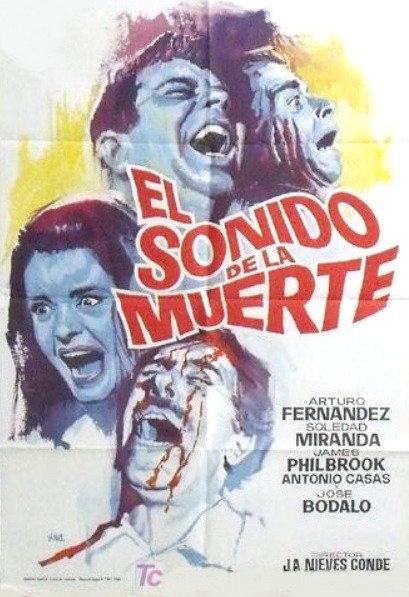 Poster from the original Spanish theatrical release. At least this film has an excuse for its monster not being depicted in its promotional imagery!
Posted by Bunche (pop culture ronin) at Saturday, October 07, 2017