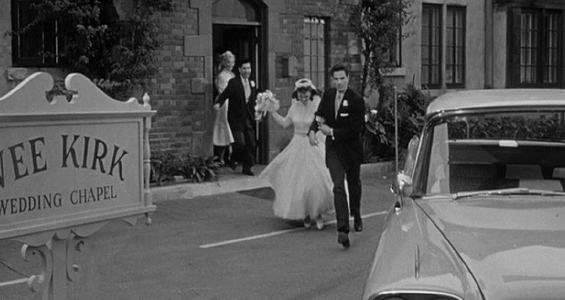 It started with a kiss...

Marge Farrell (Gloria Talbott) has been married to her husband, Bill (Tom Tryon), for a year, during which time she notices that he's no longer the man he was before their wedding day. Though not unkind to her, Bill treats Marge with a cold, emotionless lack of affection, and now dogs react defensively in his presence (which is odd because Bill is a self-admitted "dog person"). Something's clearly amiss and Marge is no idiot, so it was only a matter of time until she discovered that what appears to be her husband is in actuality an alien life form, one of a number of invaders who have infiltrated her town with a creepy agenda on their minds: marrying, mating with Earth females and fathering children. 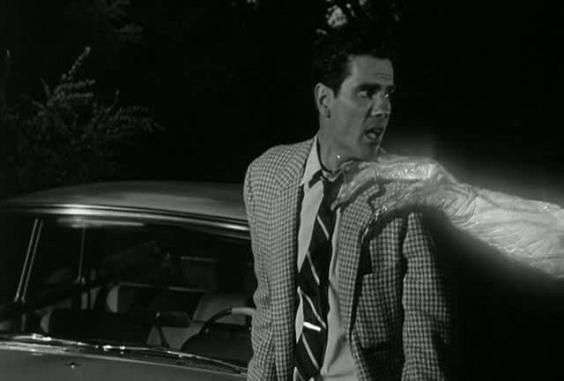 The abduction of Bill (Tom Tryon).

Their species' world and all of its females have died out and with space apparently not being as populated as one would hope, our world is their best shot when it comes to breeding options. Upon uncovering the alien charade — and surprisingly not seeming all that perturbed at having been giving her body sexually to an extra-terrestrial life form for a year — Marge sets about trying to alert the local authorities to the secret, silent invasion, but she soon finds that alien doppelgangers have replaced key members of the community's power structure and that she has no hope of contacting outside help. So, what's a girl to do?

Despite being stuck with an idiotic, WEEKLY WORLD NEWS-style title, I MARRIED A MONSTER FROM OUTER SPACE takes its concept seriously and handles it with a surprisingly "adult" approach. It's a well-crafted picture that boasts quality camerawork, an eerie atmosphere that brings to mind the small-town isolation of INVASION OF THE BODY SNATCHERS (1956), a believable script, and solid performances from all involved, so it's much better than it has any right to be. It's an interesting reflection of the ultra-macho/patriarchal American 1950's and the era's considerable disconnect between male and female, an aspect examined in a few other sci-fi/horror flicks of its time and easily the most interesting told from a woman's perspective. 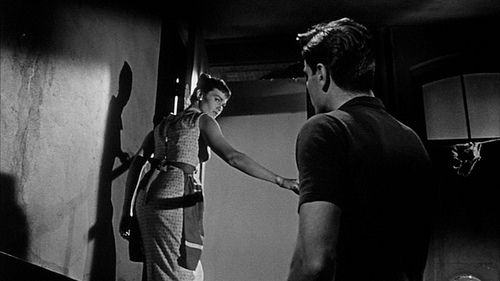 Front and center in this inversion of Fifties suburban bliss is Gloria Talbott, one of my favorite actresses of her generation, who turned in memorable performances in movies and on television in works including GIRLS TOWN (1959, as a judo-expert delinquent), THE LEECH WOMAN (1960), and episodes of THE ADVENTURES OF SUPERMAN, THE CISCO KID, and BONANZA. In this film she conveys a palpable sense of the nervous bride, which, when pitted against an invasion of reproduction-minded space-creeps, is quite effective and instantly relatable. 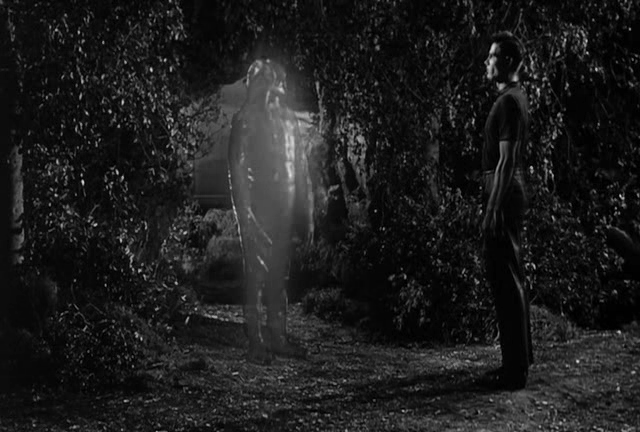 The alien and his Bill simulacrum.

Tom Tryon's also quite good and believable as the emotionless husbandly simulacrum, and he would later write the 1971 source novel for the classic horror movie THE OTHER (1972), but we'll be getting to that later this month. Tryon's Bill is at first typical of the standard 1950's alien tropes, but the interesting twist here is that he is slowly coming to understand love, though he's not in any way demonstrative with such. He does, however, treat his human would-be broodmare kindly and it's clear by the end that he has indeed come to care for her (for all the good that does him, which is none). And it's the alien's handling of the situation and Marge's reaction to all of this that leads one to ask the obvious question: Would this breeding strategy be considered rape? By human standards, since consent was not knowingly given to the aliens, but rather men assumed to be the women's intended husbands, that would be a massive "Yes, it's rape." That said, it's clear that the aliens were acting out of sheer desperation at the possible end of their species, plus their lack of emotion/empathy may preclude such moral concepts as consent when no violent physical coercion is perpetrated, but how will they think of their own actions as they slowly come to understand and perhaps experience human emotion? It's a much heavier topic for discussion than can be properly addressed in a film of its time that was intended for general audiences, and it warrants further serious consideration. And am I alone in  finding Marge's relative nonchalance upon finding out that she's unwittingly been servicing a space alien rather odd? Is it a case of simply resigning herself to "Well, that happened, so I might as well move past it?" Any way you cut it, it's just fucking weird. 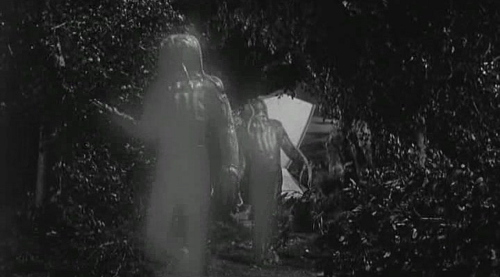 Some invaders on the move.

The film boasts quite good special effects for its era and among the highlights are: 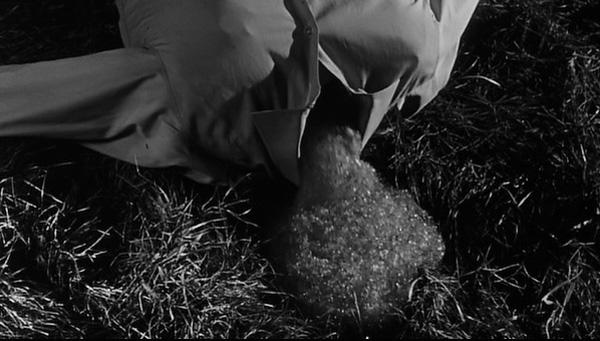 What happens to the aliens' human forms when they are found out and stopped... 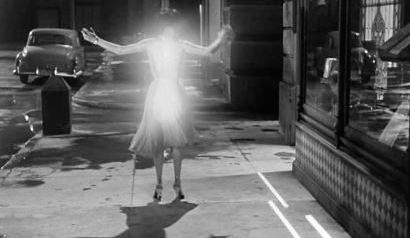 ...and a barfly on the make putting the moves on an invader, only to end up on the business end of a disintegrator weapon.

Another effort that's ostensibly sci-fi, I MARRIED A MONSTER FROM OUTER SPACE works well as a part of the "marital horror"sub-genre, wielding a solid and squirm-inducing creep factor when one really thinks about what's going on. When Marge asks "Bill" what kind of children his people would have with human females such as herself, he emotionlessly, ominously answers, "Our kind," which speaks Lovecraftian volumes. Yet despite the highly questionable way in which they implement their plan, one almost feels sorrow and compassion for the aliens. The key word here being "almost."