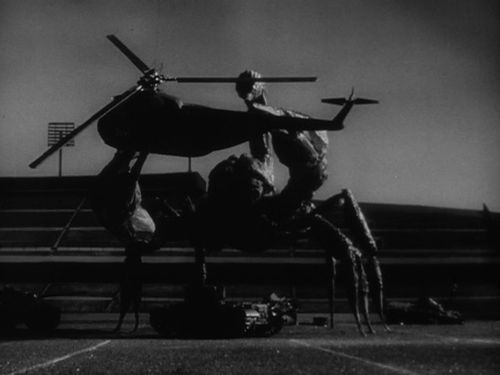 A big pot of boiling water and some drawn garlic butter should take care of this.

In a nutshell: Earthquakes in Mexico open up a subterranean realm full of all manner of gigantic stop-motion animated nasties, chief among which are huge shrieking scorpions that rampage around the countryside, destroying property and chowing down on "Ay-yi-yi" stereotypes. A pair of heroic geologists and a hot ranch-owner serve as protagonists, along with the most annoying kid character this side of a 1960's Gamera movie, and they inevitably have to deal with the titular horror, an ebony nightmare that dwarfs its brethren.

The very definition of "treading familiar territory," THE BLACK SCORPION is, plainly and simply, a shameless remake/ripoff of the vastly superior THEM! (1954), which was released by the same studio a mere three years prior. It's aping of its template is downright embarrassing and it's inferior to THEM! in every way, save for the special effects that bring its monsters to life. 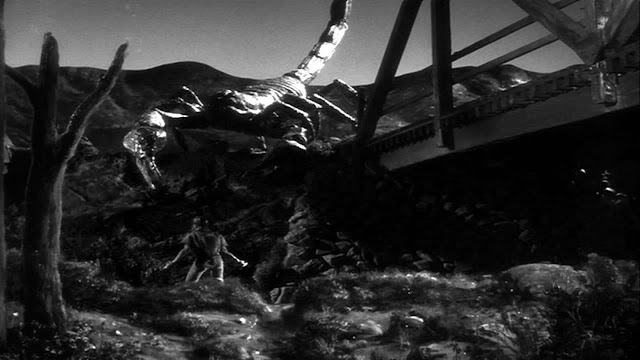 The stop-motion animated creatures are the work of the legendary Willis O'Brien, animator of the original King Kong and mentor to Ray Harryhausen (who basically became the god of stop-motion) . THE BLACK SCORPION, replete as it is with bland and pretty much interchangeable heroes and long stretches of utter narrative boredom, only comes to life when O'Brien's monsters show up to cause havoc. Seriously, there's really no other reason to sit through it. 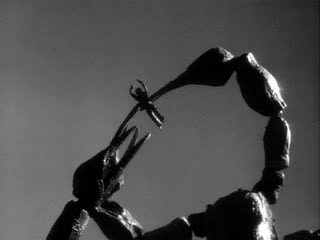 The ultimate bad day at work.

Dull, derivative, and not scary in the least (unless you happen to be under nine years old), THE BLACK SCORPION is recommended solely for animation fans and 1950's giant monster completists, and also as an entry-level giant monster flick for kids. I first saw it when I was five and I loved it, but then again I was too little to realize just how dull it was when the monsters weren't on the rampage. Little kids will sit through just about anything, as long as it has occasional parts where something of fantastical interest occurs — the cowboys-versus-dinosaur western THE BEAST OF HOLLOW MOUNTAIN (1956) being a case in point — and this film certainly has enough of that sort of thing going for it. And while I did not find it scary when I was little (I thought the idea of giant, man-eating scorpions was pretty fucking cool), the mileage of other little kids may vary, so take that into consideration. The monsters here are rather eerie in presentation and some kids have trouble dealing with the "unreal" look and movement of stop-motion puppets. My niece, Aurora, was scared shitless after seeing just one minute of the scorpions in action when she was seven, so keep that possibility in mind before running this for the wee ones. 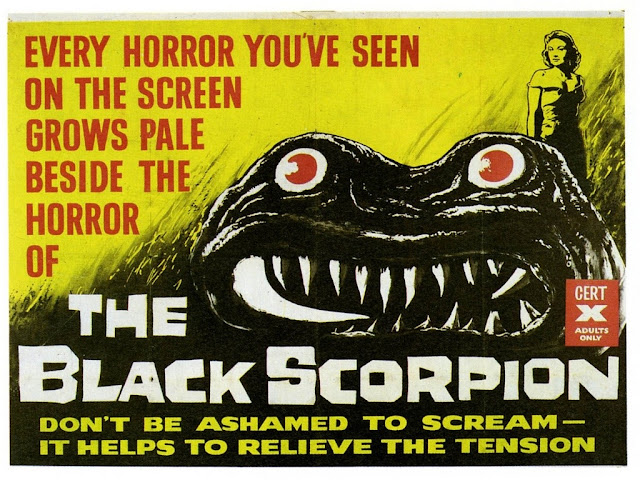 Poster from the British theatrical release. You know you're in trouble when the poster opts to explain why you should scream during what's meant to be a scary movie.
Posted by Bunche (pop culture ronin) at Friday, October 06, 2017