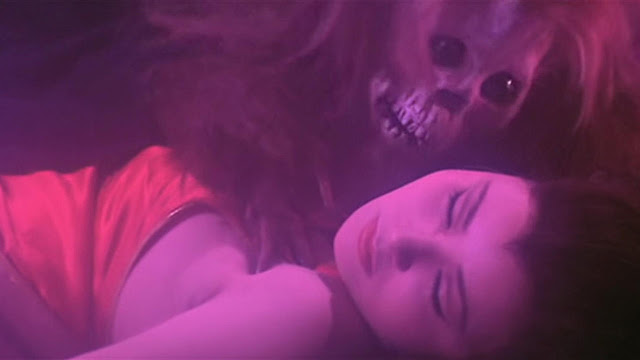 If this looks creepy, trust me, it is.

Lung (Liu Yung) is an arrogant asshole who has gained fame and fortune via his mastery of swordsmanship and general badassery, and he maintains a bitter and competitive rivalry with Tan Fu (Chen Kuan Tai), who's his equal in all ways. After grievously insulting Tan in public, the two vow to compete against one another to win the yearly lantern festival, so Lung seeks out the services of Chao Chun-Fang (Lo Lieh), an artisan of renowned lantern-making skills. Lung hires Chun-Fang and acts all arrogant about it, knowing full well that seven years prior he bested Chun-Fang in a sword duel and stole his woman. The lantern-maker accepts the commission, with the stipulation that Lung not come to check up on his progress during the work process. When Lung goes on his merry assholish way, Chen-Fang embarks on a murderous spree in which he murders and flays three women and an old man so he can use their skin to make the lanterns, the idea for which he got from a tall tale once told to him by the old man over drinks.

Chen-Fang's defeat and the loss of his woman seven years prior has driven him completely and viciously insane, and he has used the years since his humiliation to train himself into a state of nigh-invincible martial arts mastery. Donning a demonic costume, he preys on the notorious local prostitute that Tan both Lung and Tan are involved with (despite Lung being married to Chen-Fang's former squeeze), Tan's huntress sister, Lung's wife — whom he rapes before flaying her alive — and the aforementioned old man. The abductions of their ones cause Lung and Tan to believe each other is responsible, and thus does Chen-Fang sow discord between them that he hopes will make them like him. Their animosity builds to a couple of kung fu throwdowns before they figure out that they have been set up — skilled they may be, but they are none too bright — and take the fight to Chen-Fang in the apocalyptic climax.

HUMAN LANTERNS (also known as HUMAN SKIN LANTERNS) is a very uneven gene-splicing of the horror and Shaw Brothers martial arts genres, and as such it's a very interesting work. On the the one hand it's a straight-up wuxia morality play whose message boils down to "Don't be an arrogant douchebag," and on the other it's a gruesome and gory shocker about a psycho who skins naked women alive, and though both are handled with the quality one expects fro a Shaw Brothers production, the two flavors never quite gel. Instead of the horror and the kung fu blending seamlessly into one another, in one scene it's a lush costumed martial period piece, and in the very next scene things jarringly transition into ultra-dark nightmare fuel. It's never boring, and even the aforementioned rape scene is handled in a palatable manner — what's happening is absolutely clear, though we are not shown any explicit nudity, and the act of violation itself is intercut with shots of the turning cogs in a bloody mill and the crying face of Lung's soon-to-be-skinned wife — but the end result is a film that tries to be please chopsocky junkies and gorehounds, and yet might not necessarily fully satisfy either audience.

The film is populated with faces familiar to fans of Shaw Brothers films and other classic martial arts movies, including Chen Kuan Tai (THE FLYING GUILLOTINE, EXECUTIONERS FROM SHAOLIN), Liu Yung (FIST OF FURY, THE WAY OF THE DRAGON), Lo Meng (FIVE DEADLY VENOMS, THE KID WITH THE GOLDEN ARM), and Chien Sun (THE CHINATOWN KID, FIVE DEADLY VENOMS), but the movie truly belongs to the one and only Lo Lieh as Chen-Fang. LO Lieh was a prolific legend who appeared in around 200 films, several of which are martial arts classics, including the seminal FIVE FINGERS OF DEATH (1972) — which, for those who may not be aware, was the film that launched the 1970's kung fu boom in the West — DIRTY HO (1976), EXECUTIONERS FROM SHAOLIN (1977), the genre-defining THE 36th CHAMBER OF SHAOLIN (1978), the spectacular MAD MONKEY KUNG FU (1979), fan-favorite FISTS OF THE WHITE LOTUS (1980), and many, many more. While he was great as the hero in FIVE FINGERS OF DEATH, his true forte was playing some of the vilest villains ever committed to celluloid, and Chen-Fang just might be his most viciously insane role. The bastard is completely out of his mind and carries a grudge like nobody's business, which is especially bad when combined with the character's superlative ass-kicking acumen.

In a rare moment of reverie, Chen-Fang takes time to admire a "pretty" mole on the skin of the woman he just raped and flayed.

While the film overall suffers from an extreme case of scene-by-scene genre flip-flopping, don't let that steer you away from enjoying Lo Lieh at his most reprehensible and unhinged. Believe me, if You've seen some of his films and know what he's like as a bad guy, you know that calling his performance here "his most reprehensible and unhinged" is not a statement to be taken lightly. HUMAN LANTERNS may not be perfect or a classic, but check it out for Lo Lieh (R.I.P.). 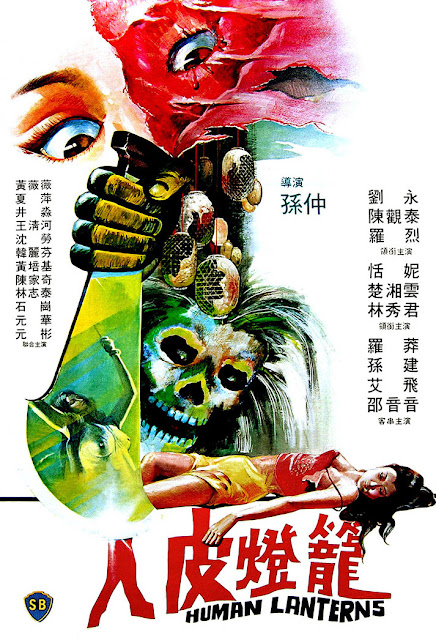