When the shrine  stares back.

Sweet young Sayuri (Yachi Matsui) has been raised in a kind Catholic orphanage since infancy, with fellow orphan Tatsuya (Sei Hiraizumi) acting as her adored more-or-less brother, but now, after years of searching, her biological father has found her and has come to take her home. During the drive home, her father warns Sayuri that her mother (Yuko Hamada) was in an accident a while back that rendered her somewhat mentally ill, so she should keep that in mind while around her. Upon arrival at the house, her mother addresses Sayuri as "Tamami," a gaffe that is swiftly corrected by the father. The mother hazily acknowledges her mistake and welcomes Sayuri to the household, which also includes Shige (Sachiko Meguro), the housekeeper.

Just as Sayuri is about to settle in, her father is called away to Africa for a two-week research trip as part of his studies of venomous creatures, many examples of which he keeps in his private study/lab. Once dad's out of the picture, Sayuri tries to sleep but is awakened by a snake being dropped into her bed. Her shrieks bring the housekeeper, but Sayuri's claims about the snake are disbelieved. The next day, her mother shows Sayuri the house's Buddhist shrine and encourages her to pray there (apparently ignoring the fact that the girl was raised Catholic). While humoring her mother's wishes and beseeching the Buddha to be kind to her, Sayuri glances up at the shrine and sees an eerie and none-too-friendly pair of eyes staring back at her. Startled, she tells her mother what she saw, and her mother oddly advises Sayuri not to tell her father of what she saw when he returns. That night, Sayuri leaves her bed upon hearing her mother stealthily wandering around. Her mother leaves food in the shrine and leaves, which Sayuri observes, but when she enters the shrine she notes that the food is gone. She confronts her mother about this and it is revealed that the shrine has a secret room that houses the aforementioned Tamami, whom Sayuri is told is her hitherto unmentioned older sister, and who also bears an unsettling "plastic" aspect to her face....

No explanation is given for Tamami living in a hidden chamber, but Sayuri just goes with it and agrees to share her own room with the cold Tamami. Tamami immediately is found to be a mean and vicious little bitch who wields control over her mother and the housekeeper, but the real horrors start once the sisters begin rooming together. As she tries to sleep, Sayuri notices odd things about Tamami, such as her obsessed focus on frogs in a biology textbook, a strange cut on the side of her face, and the fact that Tamami's back is covered in scales like a snake.

Sayuri suffers weird nightmares filled with imagery of attacking snakes, and on one night Tamami leaves the house, with Sayuri convinced she's left to search the nearby swamp for frogs. While their mother and housekeeper search outside, Tamami, in a move worthy of any ghost or spirit, manifests inside the house, revealing herself to indeed be a snake, and she savagely latches onto her terrified little sister's neck.

But when Sayuri awakens and finds herself uninjured, things just get weirder. Was Tamami's monstrous form and attack all just a dream? And what the hell is up with Tamami holding up a large, freshly-caught frog, with one leg held in each hand, graphically tearing it in half down to the crotch, and throwing the gory mess into her sister's shocked face? Whatever the case, Sayuri's recounting of the weird happenings is met with disbelief from mom and the housekeeper.

The clearly unhinged Tamami, jealously concerned that Sayuri is usurping her place in the family, demands that Sayuri be moved from their shared room to the attic, which will be kept locked at night. Once relegated to the attic, Sayuri spies on her sister through a hole in the ceiling and sees Tamami peel off her "face" before a mirror, revealing scaly patches festooning her features.

In a jealous rage, the older girl cries out in anguish, asking why she can't be beautiful, and tears her sister's clothes out of their shared closet, littering them all over the room. Seeing this fills Sayuri's heart with pity, but it's all wasted compassion as Tamami's bitchery is kicked up a notch when their mother leaves the girls alone in the house while she goes away for observation by her doctors. Tamami physically drags Sayuri into dad's lab, where she demonstrates the efficacy of a tank of acid by throwing a live snake into it and forcing Sayuri to watch in horror. Retrieving the snake's skeleton, Tamami notes that if left in the acid long enough, even the bones will be eaten away, saying it with a distinct undertone of threat. She then orders Sayuri to move out and never come back, or else she may come to serious harm. But, having promised her father to make the best of things until his return, Sayuri refuses to knuckle under to Tamami's bullying, which does not sit at all well with the elder tormentor. And as if all of this wasn't enough bizarreness to deal with, from out of nowhere a hideous, fanged, silver-haired witch shows up to pile more torment upon poor Sayuri.

With nowhere else to turn, Sayuri seeks help from the kindly nun who runs the orphanage, and upon telling her of all that she's been through, the nun begins to fill in the pieces of the puzzle with information about why Sayuri was left in the orphanage in the first place and exactly who Tamami really is. The nun, who had received a letter from Sayuri's dad asking how things were going between the girls, promises to send the father a response that outlines all that has gone on in his absence, which fills Sayuri with hope. But that hope is shattered as the nun is brutally murdered by the witch before she could pen to paper. With only Tatsuya to turn to for help, Sayuri and her surrogate brother soon discover the truth of it all and find themselves in grievous danger.

Let's hear it for nightmare fuel!

Starting off like a horror story for the kiddies (and based on a manga by Kazuo Umezu), HEBI MUSUME TO HAKUHATSUMA — which roughly translates as "The Snake-Girl and the Witch with Silver Hair" — at first seems like it could fit in with the majorly kiddie-aimed Gamera flicks that its company, Daiei Film, cranked out on a yearly basis, only much better-made. It's shot in moody black and white and it milks its monochromatic palette for maximum atmosphere, and the visual set pieces display imagination that knows what being creepy is all about. Its monsters are very much in keeping with the Japanese aesthetic for its era, with their look echoing traditional block print depictions of legendary Yokai and how such creatures would be interpreted in live productions — a style that most Westerner viewers might find "fakey" when not approaching it with cultural context in mind —and they are guaranteed to give youngsters the frights. But the story's narrative content is a study in jealousy, cruelty and outright madness that veers into quite gruesome territory, such as the aforementioned rending of the frog and the stabbing of the nun, plus some truly harrowing edge-of-your-seat mayhem during the climax. There are several "HOLY SHIT!!!" moments that are quite jarring for a film of its vintage, and even taking into account the harsher aspects of what's acceptable in Japanese storytelling for youngsters as opposed to our Western consideration of such material, things get majorly hardcore toward the ending. And though all is revealed by the end, some of the story's more fantastical elements are not explained, and those omissions appear to be a case of sloppy screenwriting that assumes the viewers will fill in those plot/logic gaps themselves.

Nonetheless, HEBI MUSUME TO HAKUHATSUMA is very strong meat for what can be considered a kiddie horror, and as such it is very much recommended. (It also makes one wonder what the Gamera movies might have been like if Daiei hadn't so flagrantly cheaped-out and half-assed that series pretty much from the beginning.) 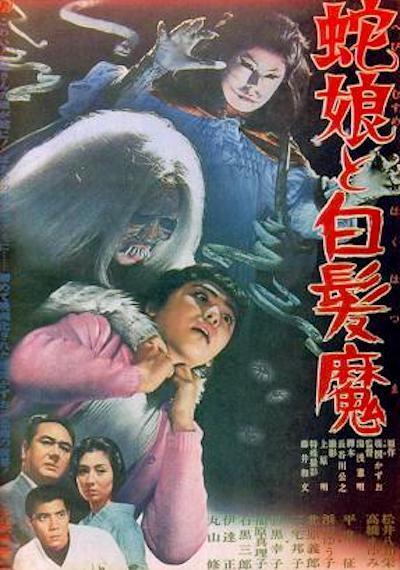