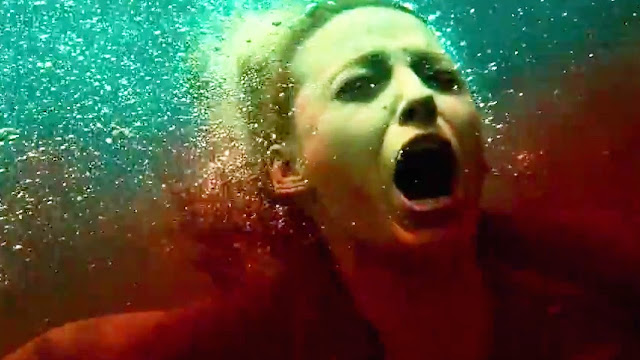 Medical student Nancy Adams (Blake Lively), takes a surfing holiday to Mexico while grieving for her recently-deceased mother. Her mother's death has led Nancy to consider leaving med school, but serious consideration of that decision is put on hold as Nancy, following hours of surfing with friendly locals, is attacked by a massive great white shark that has been feeding on the nearby carcass of a humpback whale. Nancy's surfer athleticism and medical training allow her to survive and make her way to an exposed rock outcropping in the shallows, a mere 200 yards from the beach and safety, where she's just out of the water enough so that the apex predator cannot reach her. But the shark is mindlessly relentless — to put it very mildly — and it's only a matter of time until high tide renders Nancy easily obtainable...

Let's face it: When it comes to shark movies, JAWS (1975) was a rock-solid masterpiece of suspense and terror that defined the genre and set the standard, so pretty much every shark movie that came in its wake could not help but come off as feeble or a pale imitation by way of comparison. With that stated, I'll go out on a limb — or an isolated rock — and name THE SHALLOWS as probably the very best of the post-JAWS shark-centric shockers. Its premise is the very model of narrative simplicity, set as it is in one remote location and peopled with an absolute minimum of characters, so what we really focus on is seeing just how Nancy will survive against what is for all intents and purposes a voracious sea monster of the most implacable order. 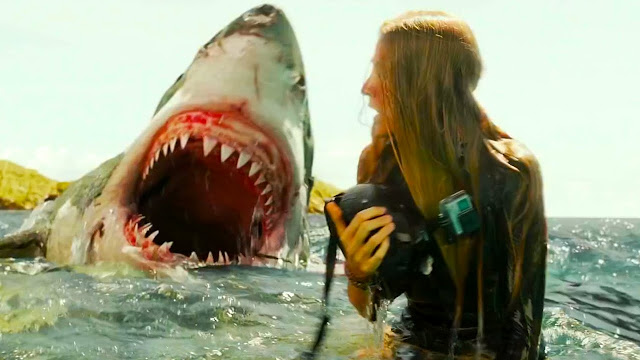 "Those goddamned Beach Boys are a pack of fucking liars!!!"

Seeming even more consumption-minded than the shark in JAWS, the great white found here just will not stop in its efforts to eat every fucking thing in its path succeeding in devouring three other victims as it awaits its chance at taking Nancy. It's big, it's terrifying, and, thanks to modern special effects, it's a beautifully realized and downright nasty antagonist.

And since the other human characters are pretty much ancillary shark-fodder, Blake Lively is given a terrific showcase in which to shine. She imbues Nancy with a relatable humanity and disorientation in the wake of the character's mom's death, which only makes her clearing-the-mind-via-surfing-holiday gone wrong seem all the more terrible. It's also a very physical performance, and while Lively spends the film in a bikini and a subsequent leg-exposing body-glove, the hot chick factor is almost immediately forgotten as the shark enters the picture and Nancy proves herself tougher and more resourceful than you will ever be.

I love sharks and shark horror stories, and THE SHALLOWS easily makes it into my roster of Top 5 shark flicks of all time. No small feat, that, so give it a look. And bear in mind that it manages to be riveting and scary as hell with only a minimum of PG-13 gore. HIGHLY RECOMMENDED. 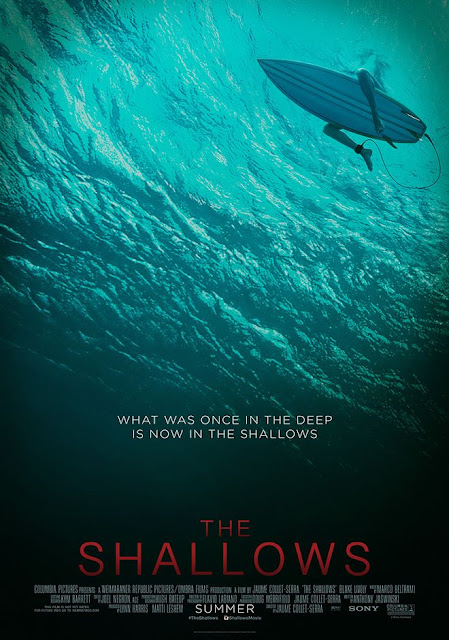