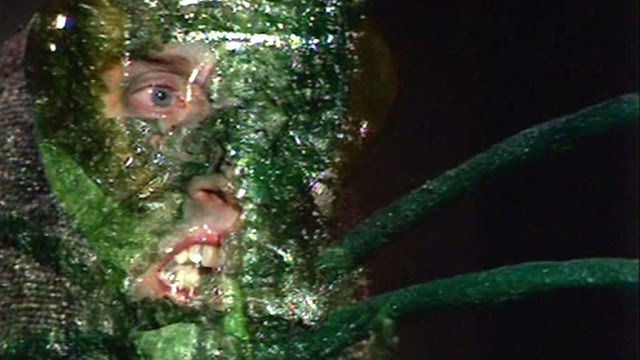 When the human body becomes an alien incubator. 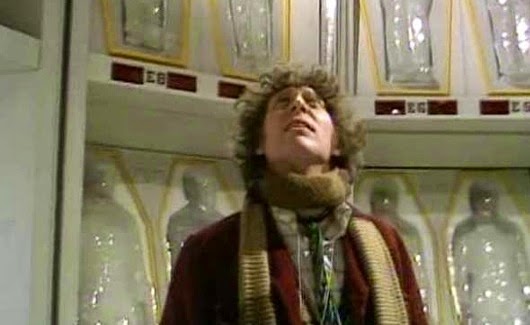 The Doctor (Tom Baker) marvels at the frozen survivors of the human race, his favorite species.

After exploring  the facility and noting that something had damaged assorted station functions, the travelers discover several hundred cryogenically preserved human beings, along with the long-dead corpse of a large insectoid creature. Upon reviving the station's first med-tech, Vira (Wendy Williams), the Doctor and friends are informed that the Nerva Beacon contains genetically-screened pairs of ideal humans that were placed in orbital stasis in advance of solar flares that would scorch the planet. The plan was for the sleepers to awaken after five-thousand years and reclaim the Earth, but, thanks to the unexplained systems damage, they overslept by several thousand years. The station's captain, Noah (Kenton Moore), is also awakened, but while he warmly greets Vira, his assigned pair-mate, he perceives the Doctor and his companions as threats and treats them with open and uncharacteristic hostility. It soon becomes apparent that the station was long ago breached by the Wirrn, a species of sentient insects that lived in deep space but required planets upon which to establish breeding colonies, and indigenous mammals to serve as hosts for their larvae. While the survivors on the Nerva Beacon slept, other spacecraft were launched from Earth and sent deep into the galaxy in search of other suitable worlds, and some of them chanced upon the Wirrn's breeding ground, which they wiped out. That drove the desperate insects back into space in search of new breeding areas and host fodder, where they found both objectives in the form of the Nerva station. The dead Wirrn was a queen and she managed to infect Noah and another crew member as they slept, and Noah is beginning to metamorphose into something other than human... 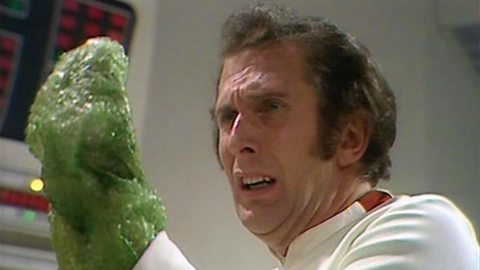 The insidious reproductive cycle of the Wirrn meets Homo Sapiens.

The Wirrn are also revealed to absorb the knowledge of the creatures they gestate within, but until now they only had access to lesser life forms. If the Wirrn succeed in gestating within the station's sleepers, the Wirrn will become technologically capable and seize the Earth as the launching point from which to begin a campaign of interstellar colonization/conquest. Needless to say, the Doctor and the active humans cannot allow that to come to pass... 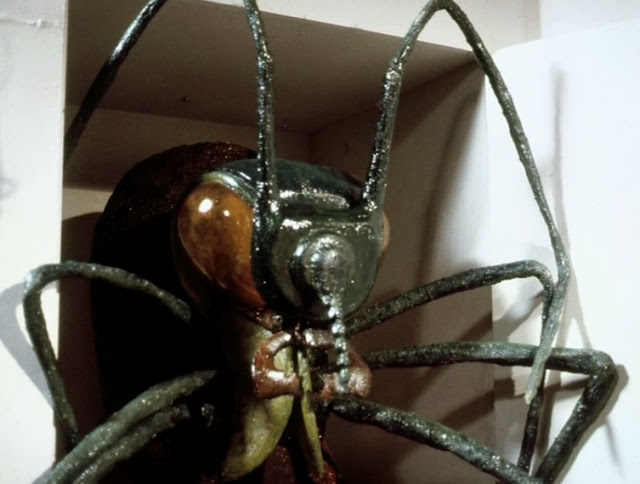 Coming just after the lackluster "Robot" (Tom Baker's inaugural serial as the Doctor), "The Ark in Space" marks the first of several truly great stories from Baker's legendary and lengthy run as our favorite Timelord. The isolated location with no chance for outside help is the perfect setting for this tale, harking back as it does to the "base under siege" trope that became the show's stock in trade during the era of the Second Doctor, and the Wirrn and their creepy reproductive cycle really get under the viewer's skin. (Pun intended.) 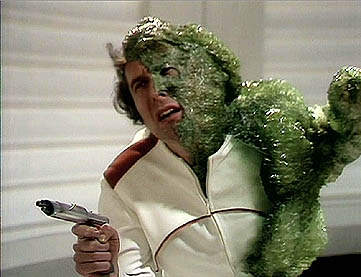 Noah (Kenton Moore), on the way to no longer being human.


The story also brings to mind that seminal work of British sci-fi/horror, THE QUATERMASS XPERIMENT (1955), aka THE CREEPING UNKNOWN (which was adapted to the cinema from an acclaimed 1953 television serial), which dealt with an astronaut returning from a space mission and changing into a hideous and deadly alien organism. But what's most interesting about watching "The Ark in Space" today is noting how similar many of its plot elements are to 1979's ALIEN, one of the all-time masterpieces of sci-fi/horror fusion, which came four years after this serial first aired. I'd like to think that the makers of ALIEN didn't see this story and shamelessly crib from it — after all, some of the roots of ALIEN can be seen as far back as the script for DARK STAR (1974), which was co-written by Dan O'Bannon, who went on to write the screenplay for ALIEN — but the similarities are too glaring to ignore...

Whatever the case may be, "The Ark in Space" is absolutely recommended to those who prefer their DOCTOR WHO old school and scary, and for ALIEN junkies who'd like to see an earlier take on similar material (other than 1958's IT! THE TERROR FROM BEYOND SPACE). 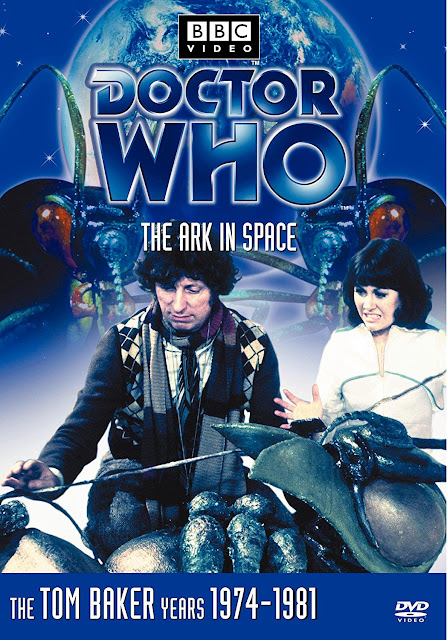 Classic Doctor Who is still my favorite Doctor Who. Always happy to see you review an episode.