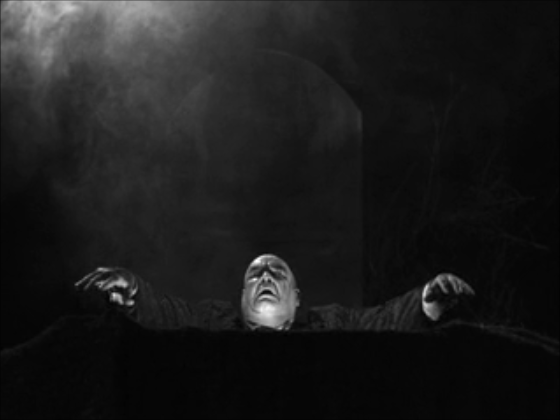 What more can be said about PLAN 9 FROM OUTER SPACE, the legendarily bad magnum opus of the equally legendary cross-dressing filmmaker Edward D. Wood, Jr.? Long considered to be "the worst film ever made," the film has gone on to become a perennial on late-night TV and in film festivals at revival houses, all thanks to its weighty reputation. Everything you've heard about it is true, such as the nonsensical script, shoddy zero-budget sets, acting that mostly would not pass muster in a junior high school stage production, the infamous "special" effects that feature pie plate flying saucers very visibly suspended from fishing wire, and the tragic fact that this was the final film of horror icon Bela Lugosi, who by this time in his career had been all but forgotten and eked out a living as villains in Grade-Z schlock while hiding his heroin addiction. But is PLAN 9 FROM OUTER SPACE truly deserving of its crown as the worst movie of all time? My own answer to that query is a resounding "no." Allow me to explain. 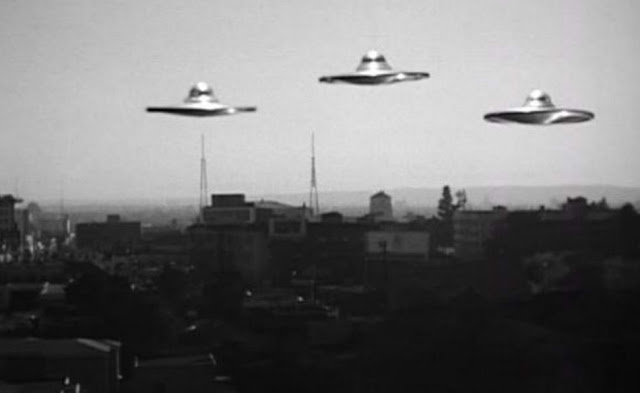 So it ain't THUNDERBIRDS-quality. Eat a bag of dicks.

PLAN 9 FROM OUTER SPACE tells the story of the titular extraterrestrial scheme that, after eight previous attempts at contacting us, involves raising the recently-dead in hope that we will finally stop ignoring the aliens' communications and take them seriously. An airline pilot, a number of cops, and assorted representatives of America's military all come together to take the presumed fight to the spacemen, but what they do not expect is that the aliens genuinely come in peace, with the intent to warn us that our current rate of progress with the technology of war could lead to the discovery of a super-weapon that could (somehow) ignite sunlight itself and therefore destroy the universe. Such power should be avoided and must not fall into the hands of a race as immature and "stupid" as ours, but the Earthmen, in a move that basically proves the aliens' opinion of us to be correct, beat the shit out of the alien duo who are running Plan 9 and sabotage their flying saucer, which, after the Earthlings escape, bursts into flames and explodes over Burbank. Thus is Plan 9 thwarted, but a space station full of aliens remains in orbit, possibly readying to launch Plan 10...

Sure, it's a cheapjack production that was made with a very dodgy of competency on all fronts,  which admittedly makes the film easy to laugh at, but when looked at with Ed Wood's intentions in mind, the film is not merely another in the endless parade of B-movies fit only for mockery. If anything, it's commendable for giving it the old college try while working with resources that could barely allow one to purchase a KFC family bucket. Wood's sincerity is evident in every frame, and of sincerity automatically translated into artistic talent, Ed Wood would be considered right up there with the likes of Kurosawa or Scorsese. He made a number of films that are undeniable turds, but while many of their contemporaries in the schlock niche were designed solely to be cranked out in order to separate audiences from their hard-earned cash, Wood clearly possessed an artistic vision that was influenced by classic horror imagery and film noir aesthetics.

I first became aware of PLAN NINE FROM OUTER SPACE by name at the tail-end of my ninth grade year (1980), when I read Michael and Harry Medved's book on bad movies, THE GOLDEN TURKEY AWARDS. It was a followup to the previous THE FIFTY WORST FILMS OF ALL TIME (1978) — an admittedly fun book that also called the authors' taste in films into question, as the majority of the cited films were nowhere near being worthy of inclusion in so dubious a roster, with several of them being legitimately good — and it was divided into categories voted on by readers of the the previous volume, with the final category being a search for the very worst film ever made. Though still somewhat obscure at the time PLAN 9 FROM OUTER SPACE reportedly won by a landslide, allegedly cited by viewers who had seen it at Jesus o'clock in the morning during late-night movie showcases on TV.

The GOLDEN TURKEY book, as you can well imagine, was a life-changer of a book for me and was absolutely one of the influences that set me on the path of the armchair schlock cinema student/historian, so I was quite eager to someday see PLAN 9 FROM OUTER SPACE for myself. Having read numerous books on sci-fi and horror movies, as well as having absorbed information from the pages of FAMOUS MONSTER OF FILMLAND magazine and others of its ilk, I recognized some of PLAN 9's now-iconic imagery, such as the creepy reanimated forms of Vampira and Tor Johnson, but I had no idea that the film itself was hailed as the end-all/be-all of celluloid disasters. 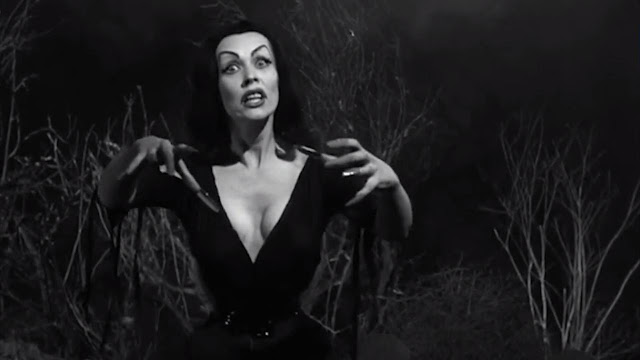 The reanimated Vampira stalks the night.

Upon learning of the movie's rep, I pined to see it, but it was not until Norwalk, CT's legendary Sono Cinema ran the first of its fan-favorite bad movie festivals that I had the opportunity. The place was packed that night and the air was thick with a haze of marijuana smoke, so the ambience could not have been more appropriate. As the film unspooled across the screen, I have to admit that I found it hilarious, and there was even a memorable moment where one of the characters notes a strange emanation from a nearby by exclaiming "What's that light?" immediately after which the film caught fire  and the audience howled with laughter as the image visibly melted on the screen. (It was repaired in short order.)

In the years following that first screening, I saw the film numerous times and it has since become one of my go-to comfort DVDs that I sit through for perhaps two or three screenings per year. For me the film holds an unintentional childlike innocence that's bolstered by its creator's worn-on-his-sleeve adoration of the spooky, atmospheric monster flicks of his youth, and though he failed at imbuing the movie with anything that comes close to genuine scares, he at least put the time and effort into crafting an eerie midnight landscape that brings to mind a live-action Charles Addams cartoon. (That is, when he was not unconvincingly shooting daylight for night.) 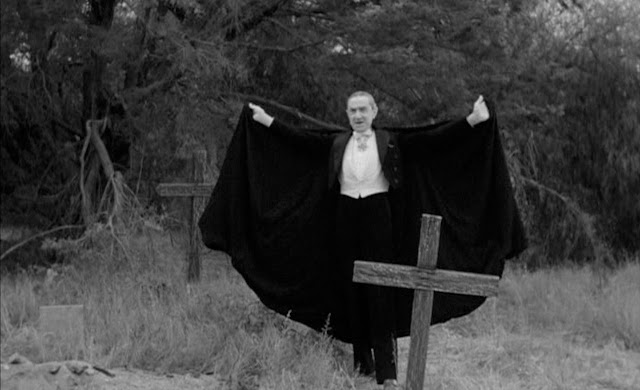 And the icing on the cake is the casting of Bela Lugosi as a hapless old man who, while grieving for his recently deceased young wife, is himself hit by a car (which happens offscreen, though we hear it) and brought back from the dead by the aliens. Lugosi's presence in the film is short and features no dialogue, but he's depicted in all of his caped Dracula glory in a couple of memorable shots, and it's evident that the director had him in place as the perfect accent in his love letter to classic horror.

So, laugh at PLAN 9 FROM OUTER SPACE. Such a reaction is wholly understandable. Just bear in mind the artistic aspirations and intent that drove its crafting, and perhaps you, like me, will come to see it as the heartfelt little gem that it is. And as for it being considered "the worst film of all time?" I call bullshit on that. Off the top of my head I can think of 20 or more films that outstrip it in that regard, and I'm not even talking strictly about vintage movies. I've seen huge-budgeted modern films that bear none of the charm and fun contained in PLAN 9's  80 minutes. STAR WARS EPISODE I: THE PHANTOM MENACE? Disappointing from Frame One and waaaay worse than this. STAR WARS EPISODE I: THE PHANTOM MENACE? PROMETHEUS? Turgid as hell, insulting to the audience's intelligence, and concrete proof that amazing visuals cannot hide terrible acting and a script written with a broken crayon stuffed up a chimpanzee's ass. BATMAN V SUPERMAN? Despite Ben Affleck's fun take on Batman and Gal Gadot's debut as Wonder Woman, the film was a structural and scripting mess that was brutalized in the final edit. I could go on, but I will always defend PLAN 9 FROM OUTER SPACE for its integrity in the face of all of its many deficiencies. And did any of those other films inspire a tribute song by the Misfits? I dare say not. 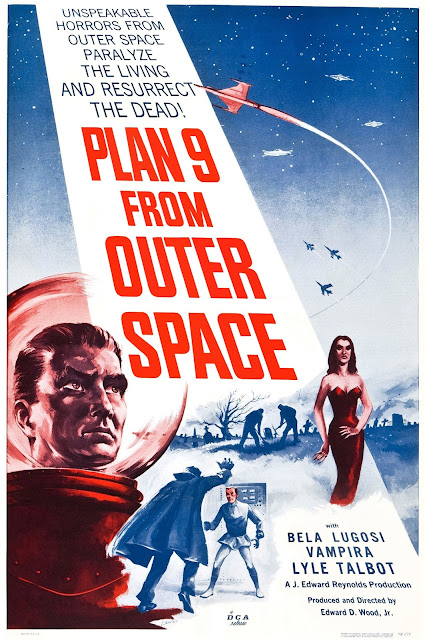